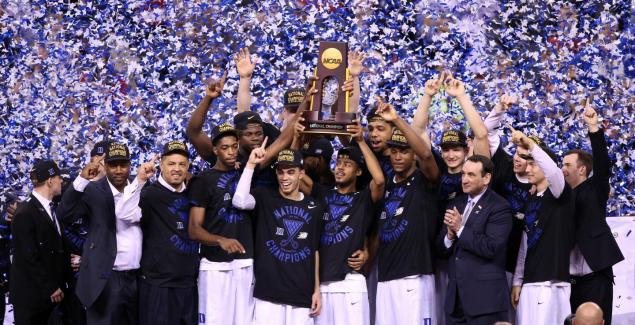 College basketball bettors just emerging from years in an isolation chamber would likely do as good a job identifying the scholastic roundball favorites for the upcoming 2016 season as the most avid fans. Oddsmakers have assigned three traditional powerhouses as the teams most likely to cut down the nets come March: Kentucky (8 NCAA titles), North Carolina (5 NCAA titles) and Duke (5 NCAA titles).

BetOnline has installed the Kentucky Wildcats as the pre-season 7.50 favorite, which at first blush appears to be a hangover from the 2015 team that spent much of last year jockeying for position among the all-time great college fives. Seven players left that Kentucky bench for the pros after an historic 38-1 season, taking more than 85% of the Wildcat scoring with them. 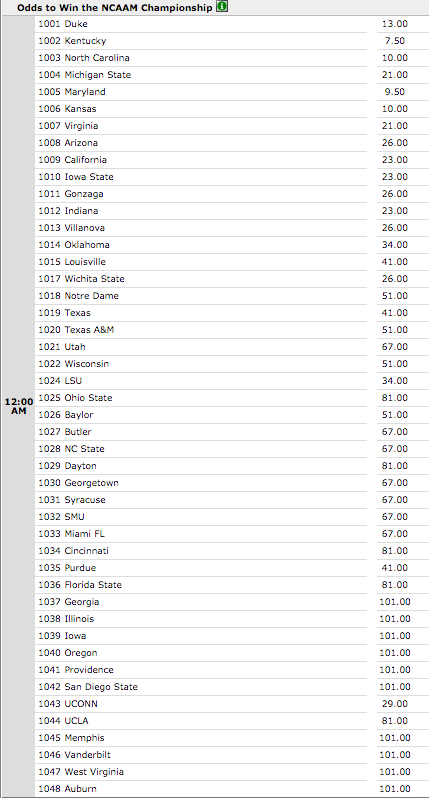 But the Kentucky talent pipeline never runs dry. Coach John Calipari will attempt to cash Kentucky’s fifth Final Four ticket in the last six years by sending out a flashy backcourt with guards Isaiah Briscoe, Jamal Murray and Tyler Ulis. Another stellar recruiting class in Lexington is led by 6’11” Skal Labissiere out of Haiti who hopes to duplicate the exploits of last year’s Kentucky freshman sensation, Karl-Anthony Townes who became the top pick in the 2015 NBA draft. 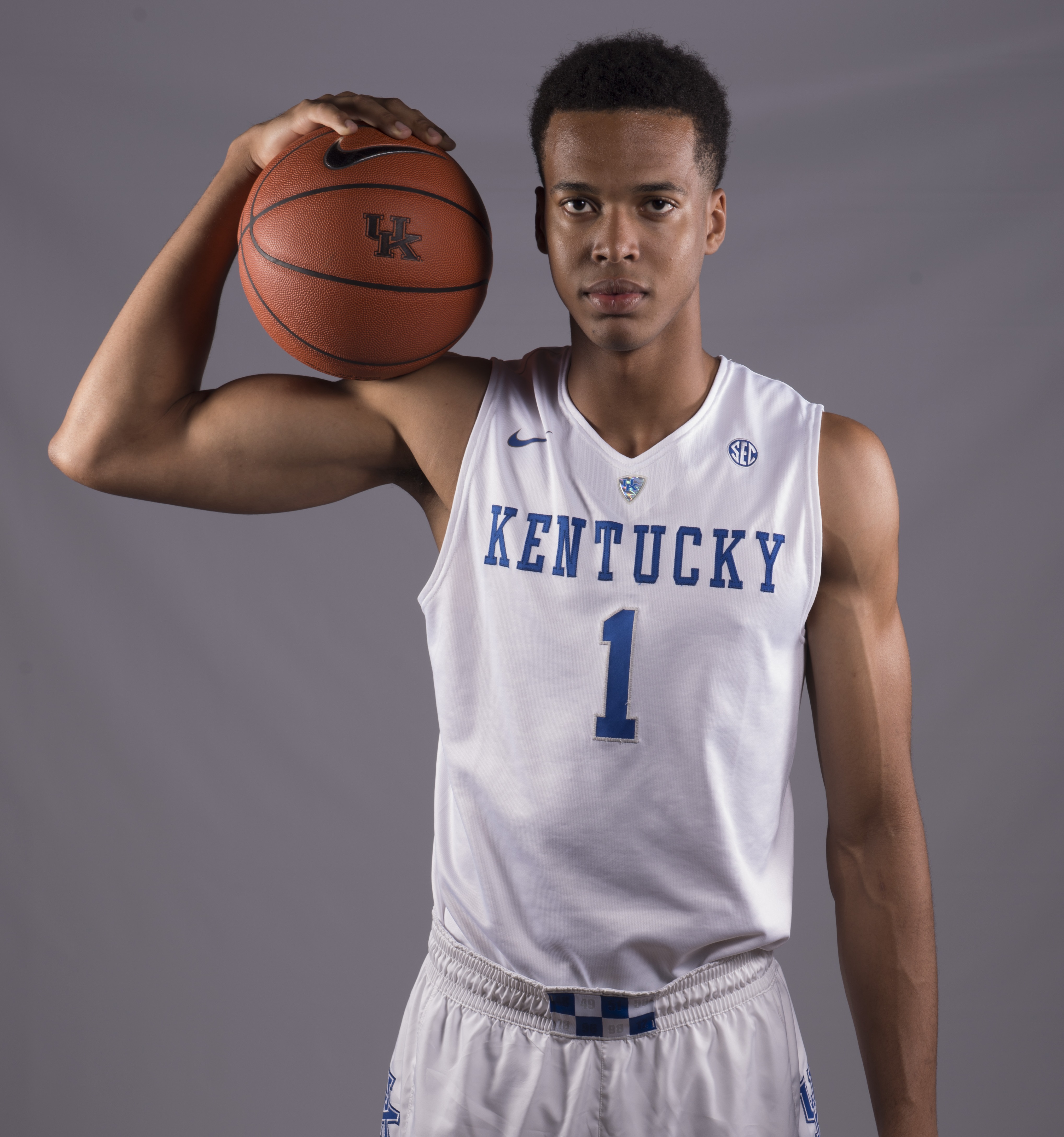 North Carolina enters the season as the Associated Press voter’s top-ranked team for the ninth time. Unlike Kentucky, the Tar Heels bring back nine of its top 10 scorers from last year and will count on an intimidating front court to dominate games. By Chapel Hill standards it has been an eternity – six years – since North Carolina was a serious contender for a national title and this year’s squad will have the specter of NCAA violations hanging over its head from ongoing investigation into Roy Williams’ program. Bwin makes North Carolina the co-favorites for the 2016 championship with Kentucky at 9.00.

Since winning the national title for the fifth time under coach Mike Krzyzewski seven months ago, the fortunes of the Duke Blue Devils have vacillated in the off-season sportsbooks. Although every key player from the championship team is gone, Krzyzewski has the nation’s number one recruiting class with which to rebuild his starting five. None, however, are projected as superstars who can carry a team which had caused differing opinions among oddsmakers. Discerning shoppers can find odds on the Blue Devils as low as 11.00 at Bwin and as high as 16.09 at Pinnacle Sports. 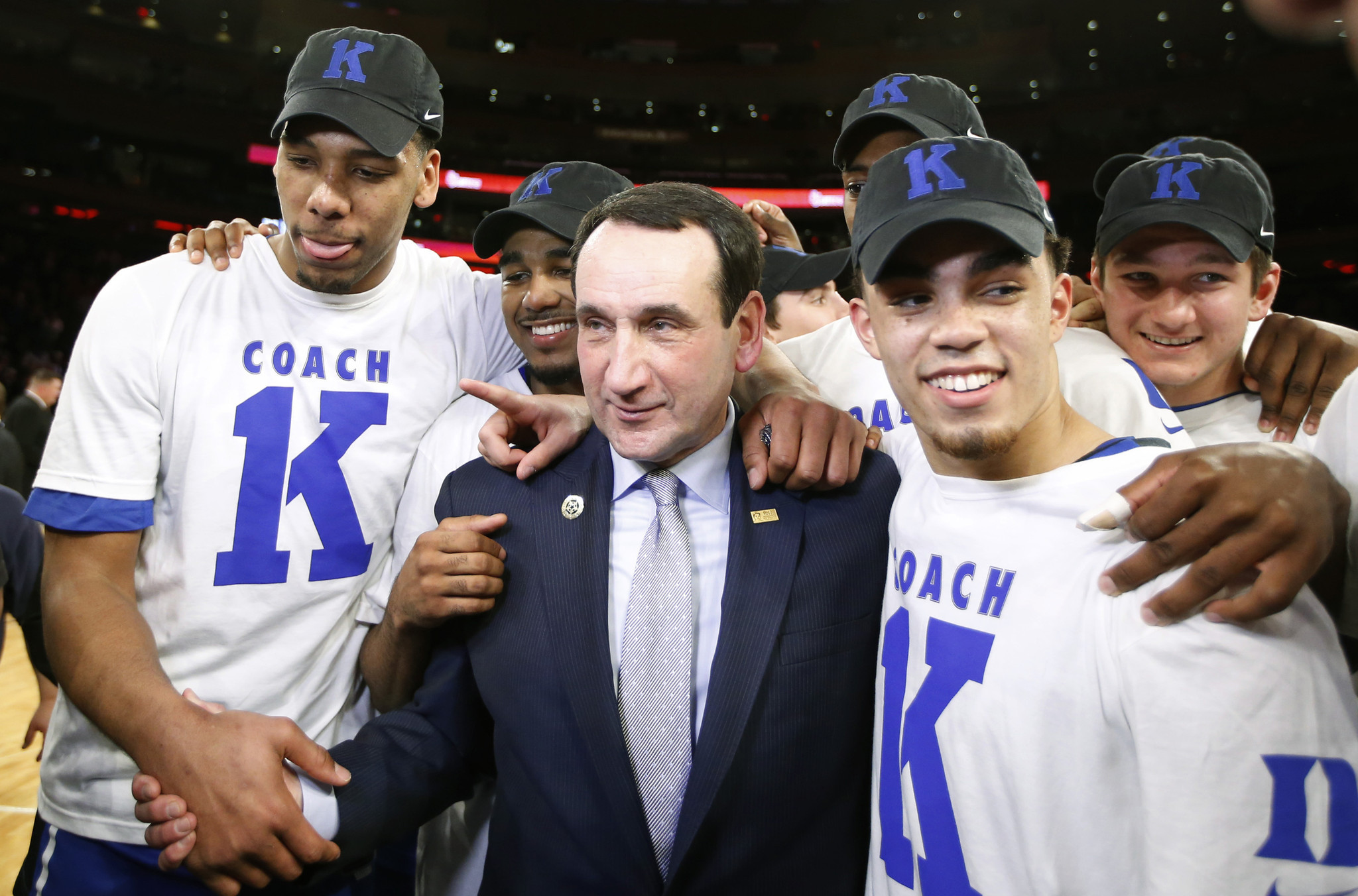 Despite the trio of marquee programs at the head of the pre-season rankings the 2016 college basketball season looks to be a wide open affair, according to the prognosticators in the sportsbooks. The Maryland Terrapins are one of the teams expected to step up into the elite ranks and challenge for a No. 1 seed in the NCAA tournament. Last year, Maryland paced the defensive-minded Big Ten Conference by allowing opponents to shoot only 39.5 percent from the field and this season an influx of graduate transfers is expected to invigorate the offense as well. The Terrapins may not just be the most talented team in the Big Ten but all of college basketball. Punters can back Maryland at 11.06 at Pinnacle Sports. 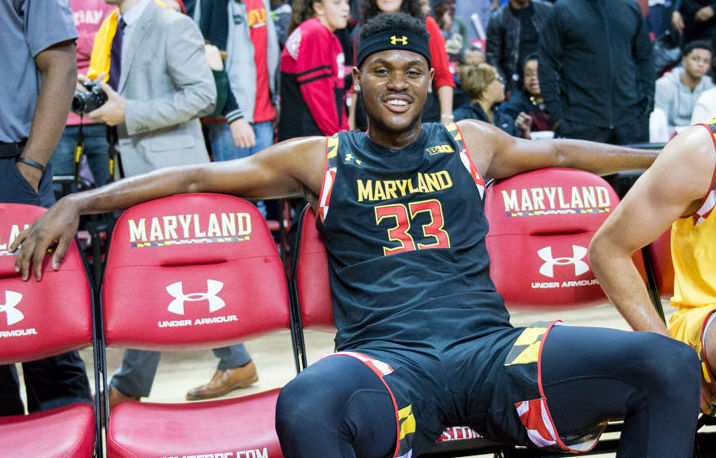 Rounding out the upper echelon of title contenders are the Kansas Jayhawks, no stranger to the role. Kansas has hung 11 straight Big 12 championship banners in Allen Fieldhouse and is a rare college team boasting senior leadership with forward Perry Ellis who has averaged 13 points and seven rebounds in each of the last two seasons. The Jayhawks have also been given 11.06 odds in the pre-season. 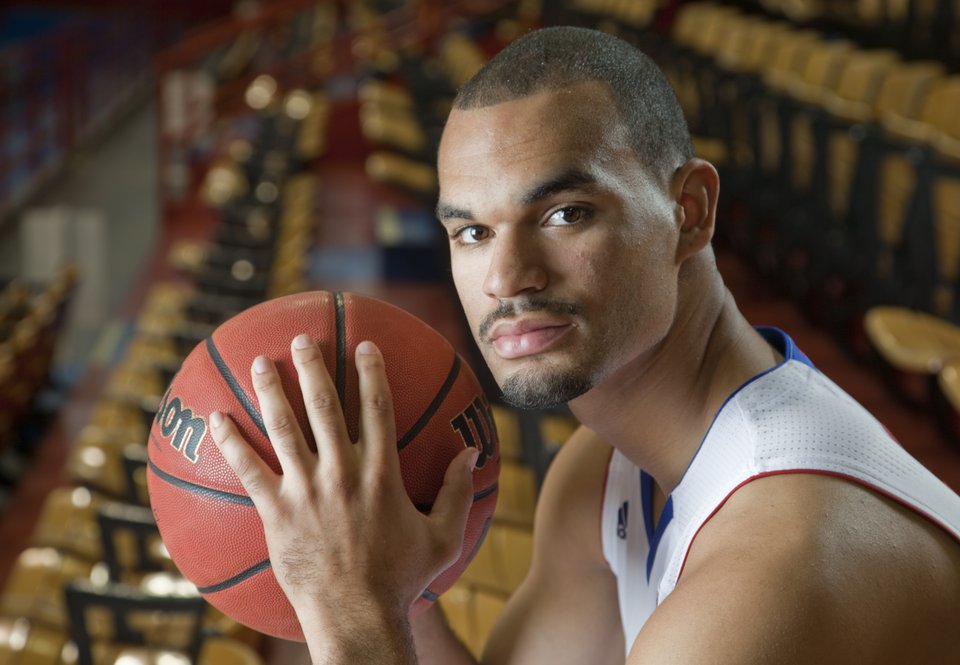 For punters looking for senior leadership the Sunflower State also yields the nation’s most experienced backcourt in Fred VanVleet and Ron Baker at Wichita State. The Shockers have piled up over 30 wins in each of VanVleet and Baker’s three seasons, which include a 35-1 record over the last two years of play in the Missouri Valley Conference. The duo has played in 10 tournament games and their steady hands can be counted on to return Wichita State to the Big Dance and the dream of playing six more. If the Shockers can carry off the title in 2016, backers will be rewarded at 26.13. 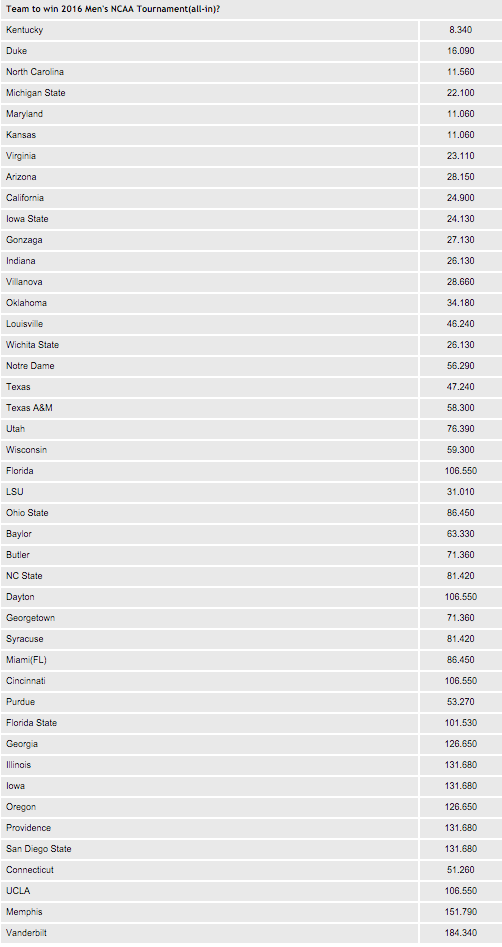 Long shot hunters may remember when the Gonzaga Bulldogs were labeled the best in college basketball. Even though that isn’t the case these days, the Zags have been participants in the NCAA tournament 16 years in a row, never winning fewer than 23 games in a season or losing more than three games in the West Coast Conference. Last year, Mark Few’s Zags racked up 35 wins and he again lines up a deep and talented frontcourt that includes Domantas Sabonis, whose father patrolled under NBA baskets in the 1990s, Kyle Wiltjer and Przemek Karnowski. Wiltjer, a 6’10” handful out of Portland, Oregon began his college career in the stable of Kentucky talent but transferred back to the Pacific Northwest and is now a candidate for national player of the year. Bettors can find Gonzaga offered at 27.13 going into the 2015-16 season. 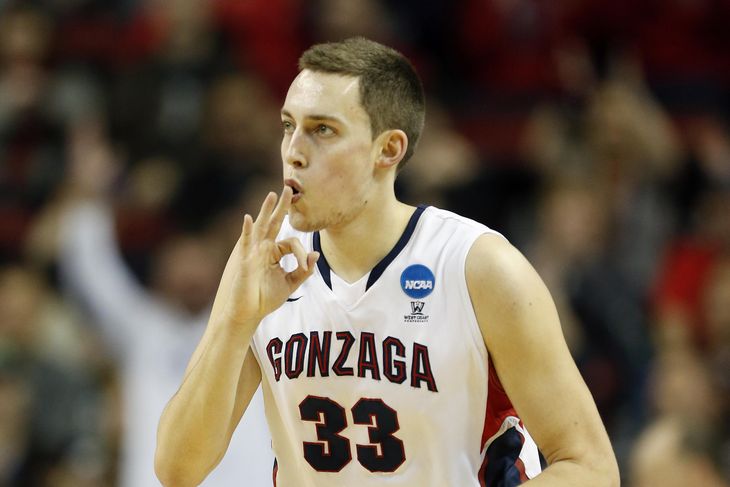 The East Coast equivalent of Gonzaga the past few seasons has been the Villanova Wildcats out of the Big East, listed at 28.66. Jay Wright’s team has specialized in dominating conference foes during the regular season and securing a high seed in the NCAA tournament only to disappear early in the Big Dance. Villanova will seek to follow-up last year’s 33-win campaign with its trademark floor balance and guard-oriented play. Four Wildcats who shot better than 38 percent from beyond the 3-point arc are back in Villanova blue and white and backers will no doubt be hoping those long-range shots will fall come tournament time. 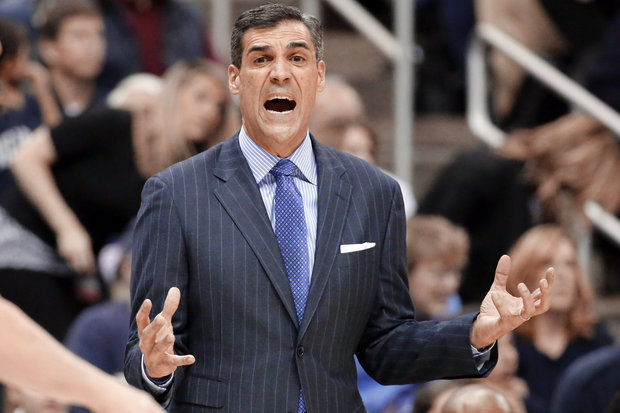