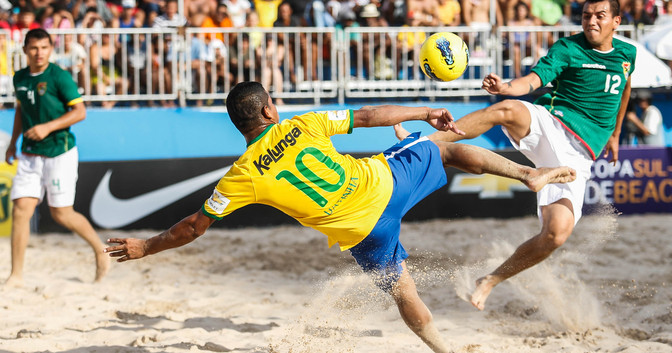 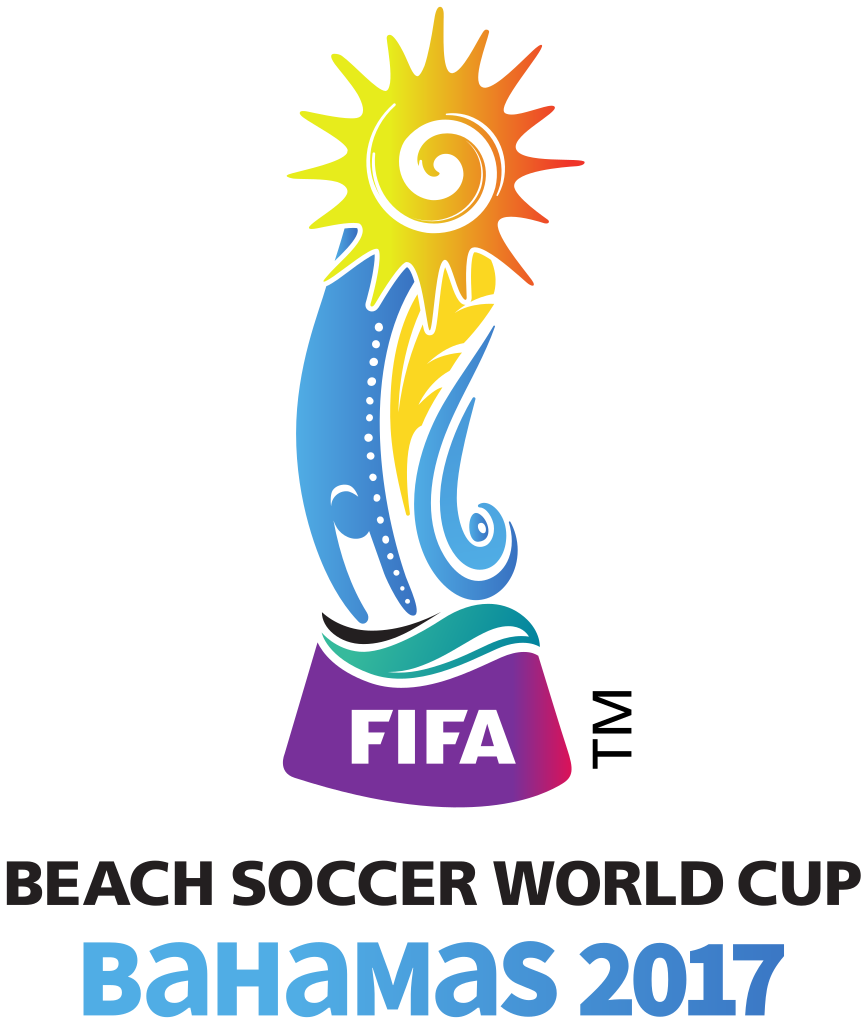 Previously the Beach Soccer World Cup took place every year but the tournament is now played on a biennial basis meaning fans must wait two years for the next World Cup to come around. This adds to the anticipation of the event and leaves fans wanting more come the end of each tournament.

The 2017 FIFA Beach Soccer World Cup will take place between the 27th of April and the 7th of May in the Bahamas. A total of 16 teams have qualified for the final tournament and they are:
Bahamas (host)
Iran
Japan
United Arab Emirates
Nigeria
Senegal
Mexico
Panama
Brazil
Ecuador
Paraguay
Tahiti
Italy
Poland
Portugal
Switzerland 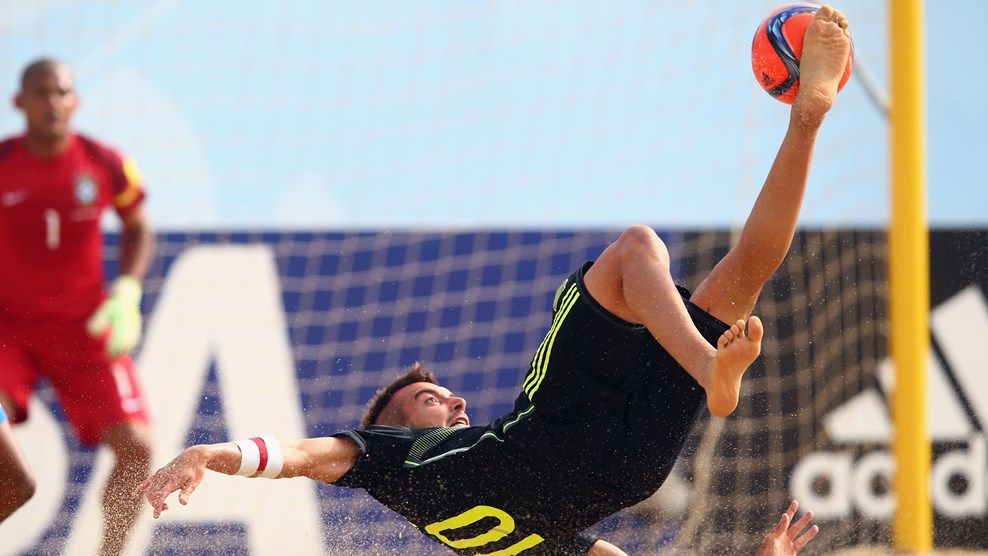 The draw for the 2017 FIFA Beach Soccer World Cup took place on 28th of February with the 16 teams split into 4 pots based on their worldwide beach soccer rankings. As host, Bahamas was automatically allocated into Pot 1 despite being only just inside the world’s top 50 teams.

The teams were drawn into four groups with one team from each pot going into every group. The groups work on a round-robin basis with each team playing every other team in the group once. Unlike standard eleven aside football tournaments, teams are awarded 3 points for a win in regulation time, 2 points for a win in extra-time and 1 point for a win in a penalty shoot-out. There are no points for a defeat. However, this format ensures both teams go for the win or face the prospect of a lottery at the end of the match in the form of a penalty shoot-out, to decide the winner.

The top two teams in each group progress to the quarter-finals, which is played as a pure knockout format through to the final. The matches are played to the same rules as in the group stage with extra-time and penalties if the match is level at the end of normal time.

The defending champion from the 2015 FIFA Beach Soccer World Cup is Portugal, who defeated Tahiti in the final.

Portugal has been drawn in Group C along with the United Arab Emirates, Paraguay and Panama. They come into the tournament as favourites to retain their title at 5/2 with 888sport and it’s easy to see why.

The Portuguese were in tremendous form during their first group phase of World Cup qualifying winning all three of their games by scoring 34 goals and conceding only one. They carried this form through to the final group phase, again winning all three of their matches, but suffered disappointment in the semi-final going down 3-1 to Switzerland. Portugal recovered in the third-place playoff to defeat Italy 8-3 and finish comfortably in third place.

Portugal boasts some very exciting talent including that of multiple individual award winner, Madjer, who is vastly experienced. They also have the likes of Belchior, Jordan Santos and Rui Coimbra in their ranks, all of whom are great to watch. You can back Portugal to win Group C at 1/7 and Madjer to finish as top goal scorer at 8/1, both win 888sport. 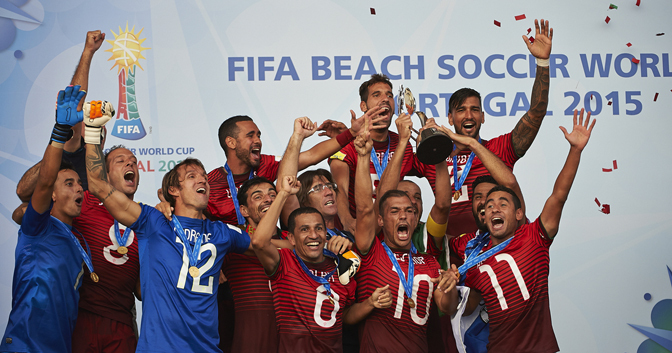 Second place in Group C will surely be contested between Paraguay and the United Arab Emirates, who are 1/20 and 1/10 respectively to finish inside the top two places in the group.

Group A features the host nation Bahamas, in addition to Switzerland, Ecuador and Senegal. The Swiss are the heavy favourites to finish top of this group and are priced at 1/5 to win it at 888sport. Interestingly, none of the top five leading contenders for the tournament, in the eyes of the bookmakers, are in this group.

However, Switzerland cannot be underestimated having made the final of the European qualifiers defeating Portugal in the process. The Swiss suffered a shock defeat in the final to Poland and this is perhaps the reason why they are not strongly fancied to go all the way at the 2017 FIFA Beach Soccer World Cup. Switzerland coach, Angelo Schirinzi, will be hoping for a repeat of the 2009 Beach Soccer World Cup where the Swiss made the final in Dubai.

Bahamas will do very well to qualify from this group having finished sixth in the 2017 CONCACAF Beach Soccer Championship. Their best player is forward Lesly St. Fleur, who scored 9 of their 12 goals in the tournament. He will need to be in good form if Bahamas is to stand any chance of making the quarter-finals. You can get 5/2 with 888sport for Bahamas to progress from Group A. 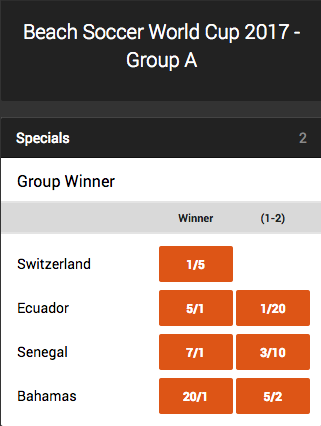 Group B is home to some strong teams and includes Nigeria, Italy, Iran and Mexico. Both Italy and Iran are fancied to do well in the tournament and can be backed at 6/1 and 8/1 to win the event at 888sport.

Iran is perhaps the most interesting bet from this group having won the AFC Beach Soccer Championship earlier this year. They recorded a fantastic 7-2 victory over the United Arab Emirates in the final and feature playmaker Mohammadali Mokhtari in their squad, who won the player of the tournament award. Farid Boulokbashi is another player to look out for having scored 9 goals in the tournament. 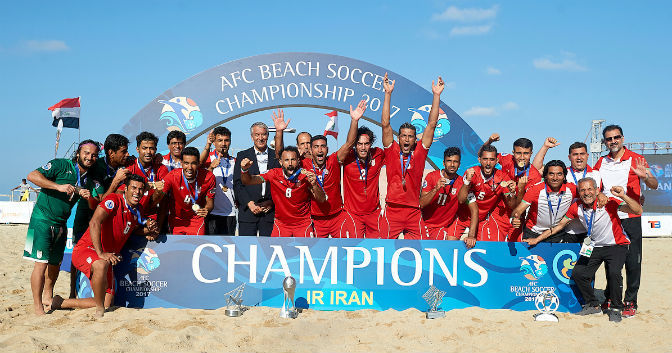 Iran has never made the quarter-finals of the FIFA Beach Soccer World Cup but this could be their year and they are sure to push the Italians to the max for top spot in Group B. You can get 5/4 for Iran to win the group with 888sport.

Finally to Group D which is the home of the most successful beach soccer nation in history, Brazil. The Brazilians have won the Beach Soccer World Cup 13 times but you must go back to 2009 to find their last tournament victory.

To qualify for the 2017 FIFA Beach Soccer World Cup, Brazil won the South American Beach Soccer Championship defeating a tough Paraguay team 7-5 in the final. Watch out for the experienced Bruno Xavier and talented forward Lucao, who scored 10 goals in qualifying. Brazil is 2/5 to top the group and 7/2 to win the whole tournament, both with sportsbook 888sport. 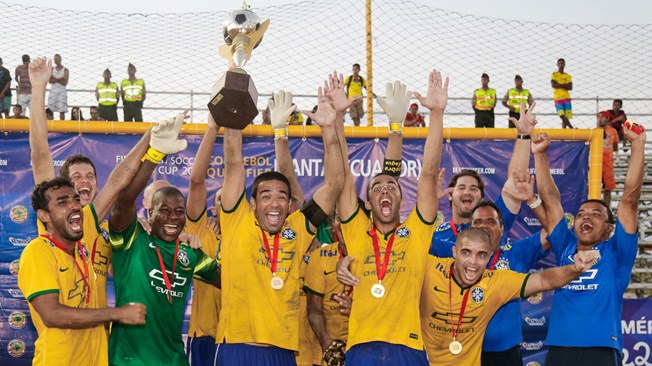 The Poles sensationally won the European qualifying tournament and will be hoping their momentum carries them through for similar success at the World Cup. Poland lost to Tahiti and Brazil at the Intercontinental Cup in November but both games were close and they are well poised to spring a surprise. You can back Poland to qualify from Group D at 4/1 with 888sport. 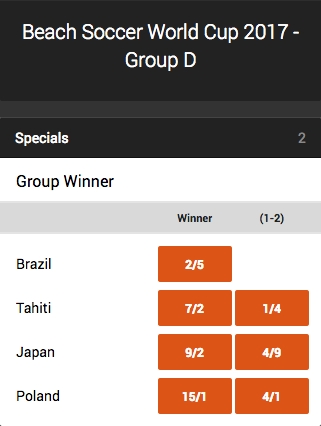 There are several realistic contenders for the top goal scorer award at the 2017 FIFA Beach Soccer World Cup. Gabriele Gori of Italy is the pre-tournament favourite at 5/1 with 888sport and his team should make the quarter-finals without any problem. Dejan Stankovic of Switzerland is an interesting bet at 9/1 as he finished as the top goal scorer at the European qualifying tournament with 25 goals, 6 goals clear of Gori.

Other names include Lucao of Brazil (6/1), Madjer of Portugal (8/1) and Mohammadali Mokhtari of Iran (11/1). If Poland is to stage a repeat of their European triumph, they will need Bogusław Saganowski to be in form and he can be backed at 50/1 with online bookie 888sport to finish as top goal scorer in the tournament.

With the dominance of Brazil over, predicting the winner of the Beach Soccer World Cup has become more difficult. There is no guarantee Brazil will make it to the quarter-finals, as they have a tough group and this makes it hard to back them. Poland is being given very little chance by the bookmakers despite their recent success and they can be backed at 20/1 to reach the final.

A good outside bet must be Switzerland, who should have no problem coming through their group and reaching the latter stages. You can get 14/1 for Switzerland to go one further than they did in 2009 and win the tournament. However, with some of the best players in the world in their ranks, plus the experience of winning the event two years ago, you cannot back against Portugal, who is 5/2 to win the 2017 FIFA Beach Soccer World Cup. 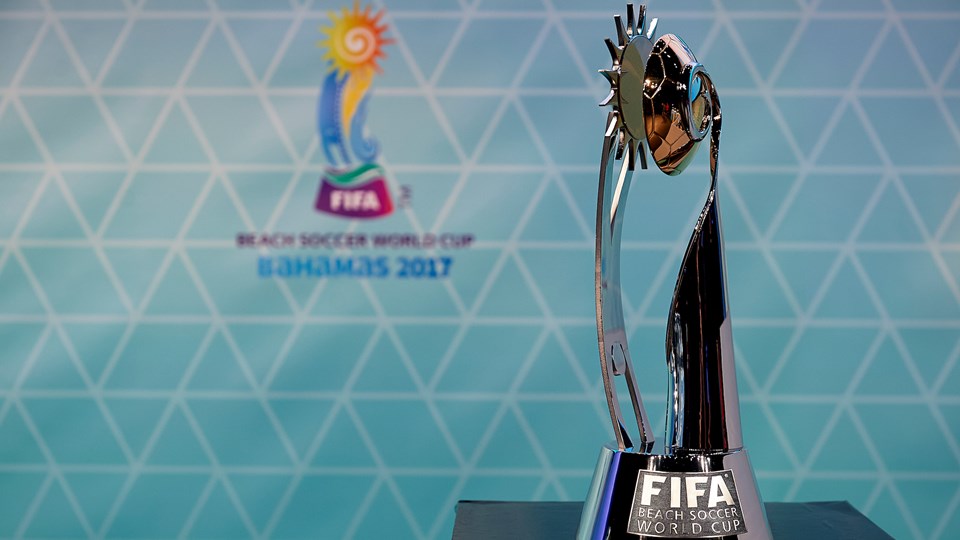