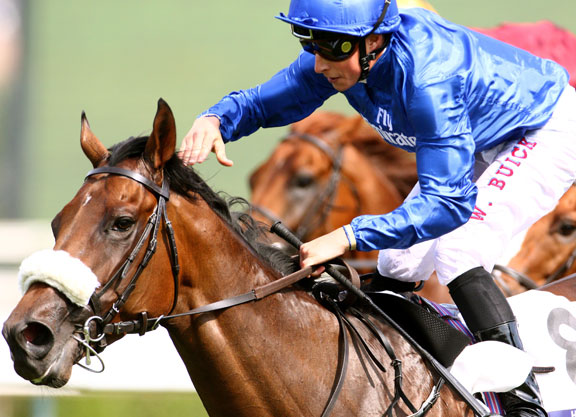 Six races a day for five days, eight Group One events, and the richest meet in Great Britain – no wonder the Royal Ascot in Berkshire is the most heavily attended racing meet in Europe. Leading off this equine extravaganza is the Queen Anne Stakes, one mile for four year olds and up, where everyone is likely to be chasing odds-on favorite Ribchester. Great Britain’s top-rated four-year old is listed as a 1.72 favourite from online bookie 10Bet. Last year at Ascot, trainer Richard Fahey shied away from sending Ribchester into the prestigious St. James Palace Stakes and the colt ran away from the field at seven furlongs in the Jersey Stakes. Lightning Spear, trained by David Simcock, will be looking to reverse results at Newbury when he couldn’t catch Ribchester. He is currently offered at 5.00. Mutakayyef, currently at 8.00, is the only other strong contender in a field of 16. 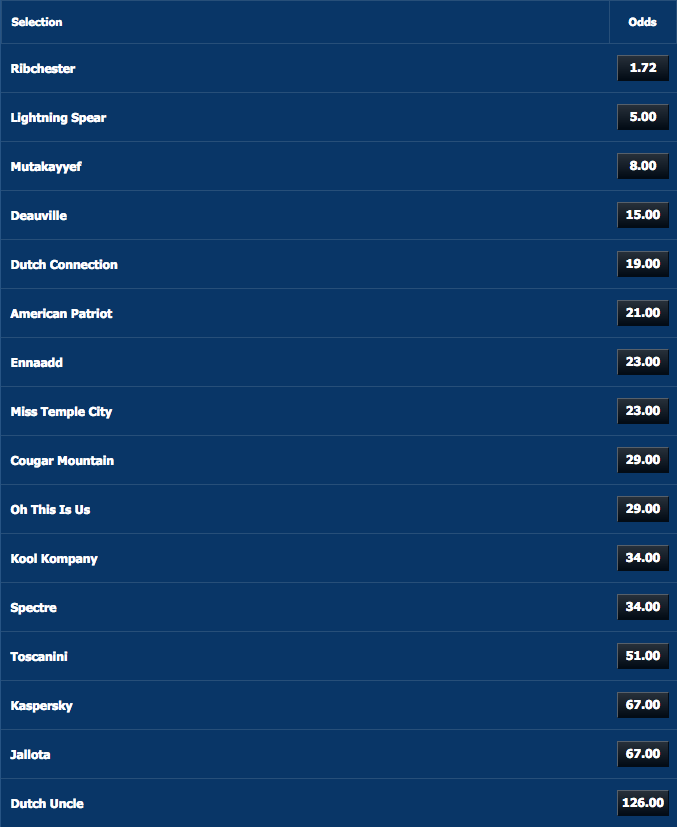 The second Group One race on opening day is the King’s Stand Stakes, a five-furlong sprint that is the shortest race in the meet. Kentucky-bred Lady Aurelia will come to the starting gate as one of the biggest stars at Ascot. She was the top-rated European two-year old filly in 2016 and thrilled British race fans with her victory in the Queen Mary Stakes here last year. The popular bay racer has been installed as a 3.75 favorite but is expected to find stiff resistance from the British entry Marsha (4.50) and the French contender Signs of Blessing (6.50). The four-year old Marsha has six wins including in the Group Three Palace House Stakes in her only outing in 2017. 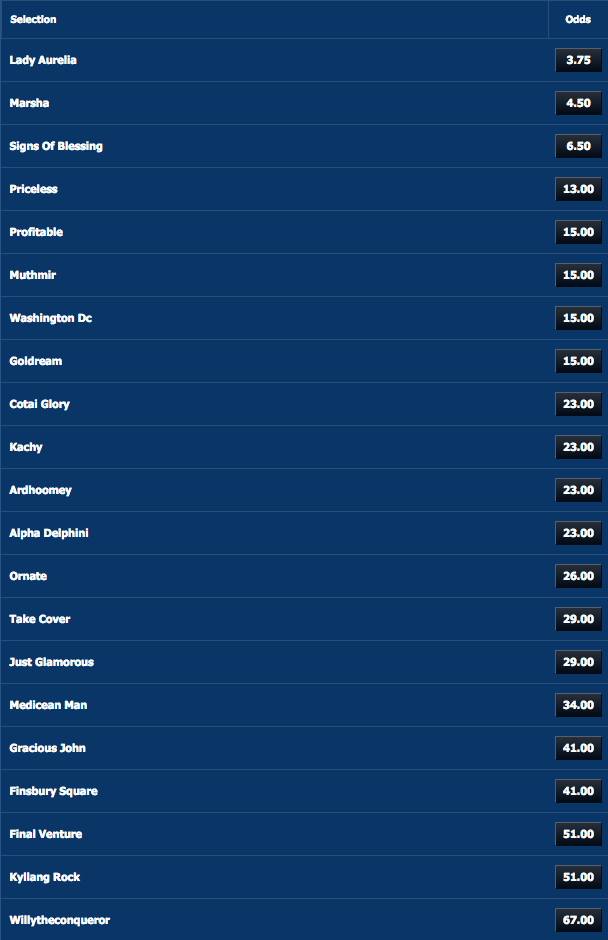 Churchill has emerged as the horse to beat in the St. James’s Palace Stakes, the final Group One affair on the first Royal Ascot day. The three-year old has already won both the English 2000 Guineas and the Irish 2000 Guineas leading to Ascot. Three-time champion jockey Ryan Moore will be in the saddle for the 1.61 favourite. Oddsmakers expect two Godolphin Stables entries to be in the St. James’s Palace mix – Barney Roy (3.00) who finished runner-up to Churchill in the English 2000 Guineas and Thunder Snow (9.00), a Kentucky Derby runner who was two lengths short of Churchill in the Irish 2000 Guineas. 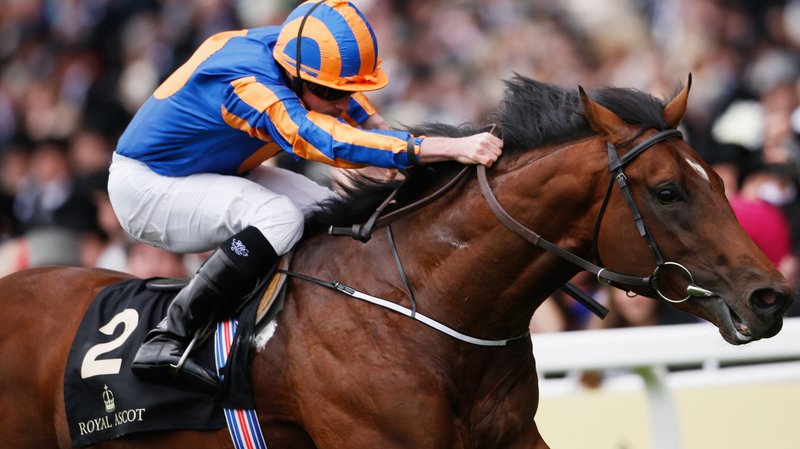 The Prince of Wales Stakes, 10 furlongs for aged horses, is the star of the Wednesday card and it promises to be a competitive affair with Jack Hobbs (3.75), Ulysses (4.00) and Highland Reel (4.00) all nominated. All are proven winners but have each had missteps over the past year. Jack Hobbs has been a training enigma and sported blinkers for the first time in a dominating win at the Dubai Sheema Classic in March. Ulysses, a four-year old from the stable of Michael Stoute, struggled in last year’s Epsom Derby and has been toiling at Group 3 in 2017; he claimed wins at Goodwood and Sandown. Highland Reel was nipped at the wire in this race last year but comes to Ascot as the reigning Breeders’ Cup Turf champion. 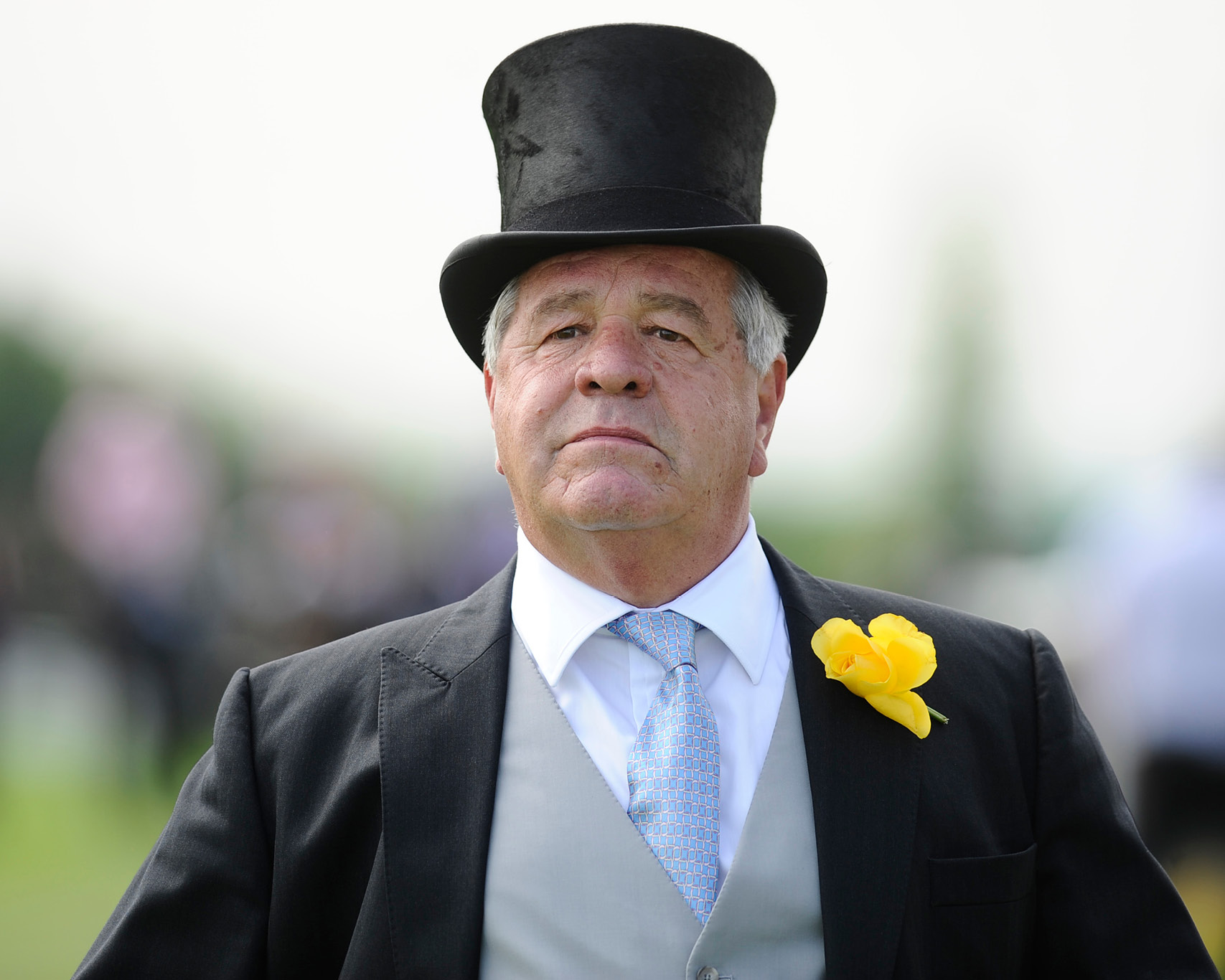 The Ascot Gold Cup on Thursday tests aged horses over two and a half miles. The odds-on choice in Britain’s most prestigious distance race is last year’s champion Order of St. George who is posted at 1.83 in the 17-horse draw. Aidan O’Brien’s star charge has warmed up with a easy romp to the wire at Leopardstown. Punters looking for a takedown of the favorite will check out Big Orange, a recent winner at Sandown, at 8.50 and Simple Verse, a former St. Leger champion, at 9.50. The Irish turf racer, Torcedor, will certainly draw interest in exotic bets at 15.00 and so might six-year old Trip to Paris, a former winner of this race, at 29.00. 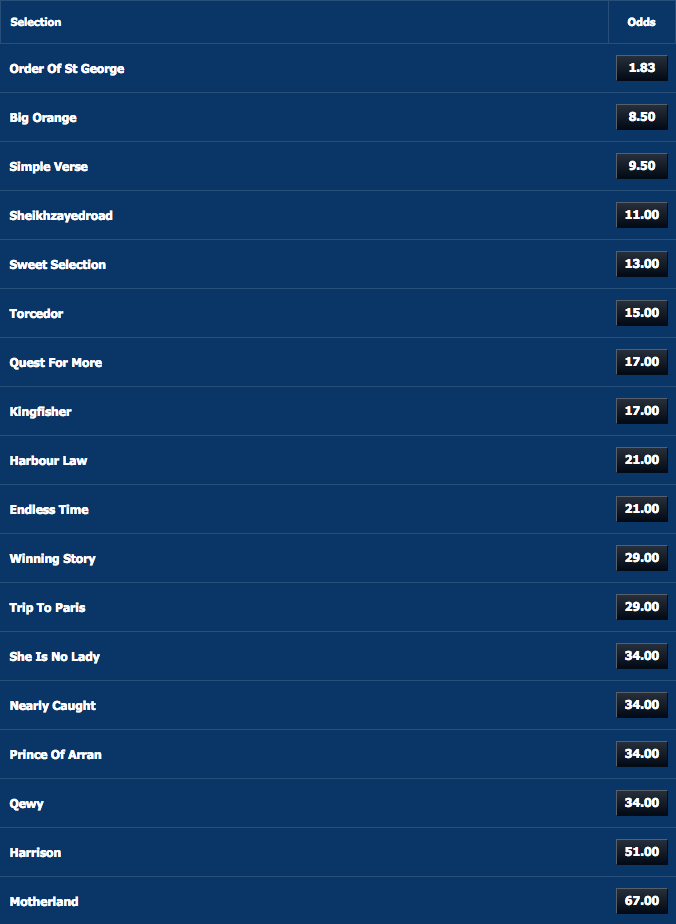 A crowded group of 19 runners have been nominated for the six-furlong sprint in the Commonwealth Cup. Five will be from Aidan O’Brien’s stable including the favorite Caravaggio. The sleek black colt was undefeated in four starts as a juvenile but took nine months off before his three-year old debut, another win in the Group Three Lacken Stakes. The unbeaten Caravaggio is offered at 1.90. Harry Angel (4.00) and Blue Point (5.50), neither of whom has yet tangled with the favorite, are expected to give lively chase. Harry Angel has two Group Two wins and two seconds in his four-race career and Blue Point has four wins including a defeat of Harry Angel in the Pavilion Stakes last month. 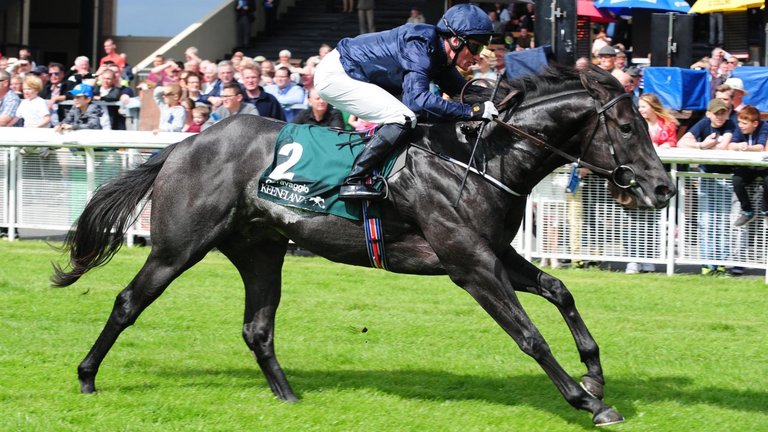 The Coronation Stakes has another short favorite in Winter at 1.57. The three-year old grey has been more impressive each time out in 2017 while adding the English and Irish 1000 Guineas championships to Aidan O’Brien’s stuffed trophy case. John Gosden’s Dabyah is expected to offer a murmur of protest at 8.00; he was a nine-length winner in Newbury in 2016 and hit the board in Group One competition in France this year. 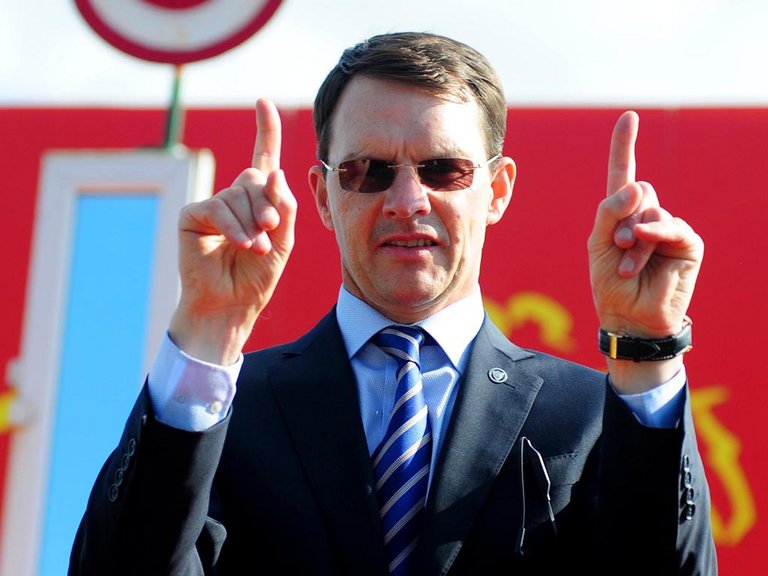 Helping close the meet on Saturday is the Diamond Jubilee Stakes that promises to be a bettor’s race. There are still 28 entries but Limato, Magical Memory, The Tin Man, and Tasleet are all expected to draw strong support. Another half-dozen horses are given a chance. Limato (5.00) was a favorite last year but did not get to the post; he later won two Group One stakes and ran mid-pack in the Breeders’ Cup Mile. Magical Memory (8.00), a five-year old gelding, has won five sprints in the past two years and is just rounding into racing form in 2017. 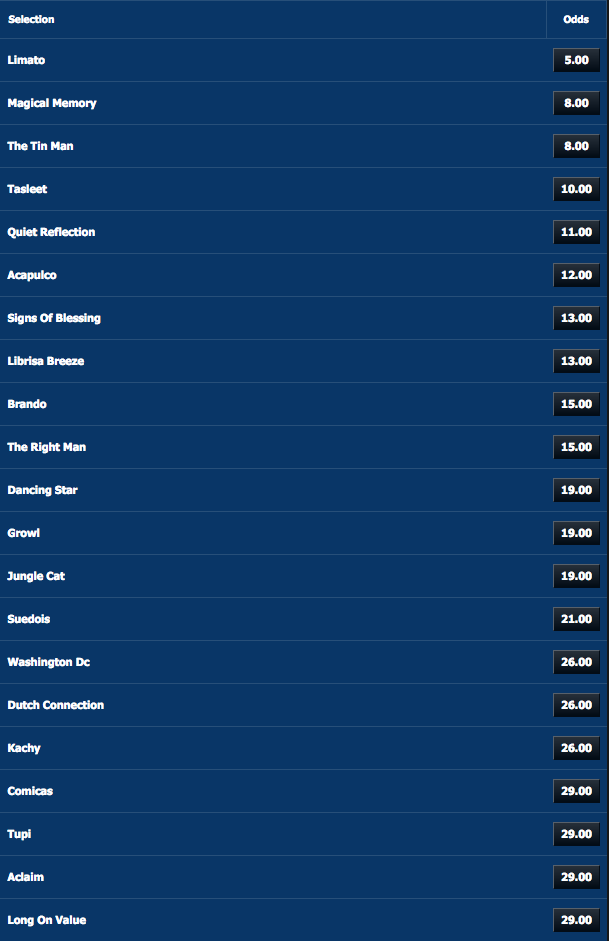