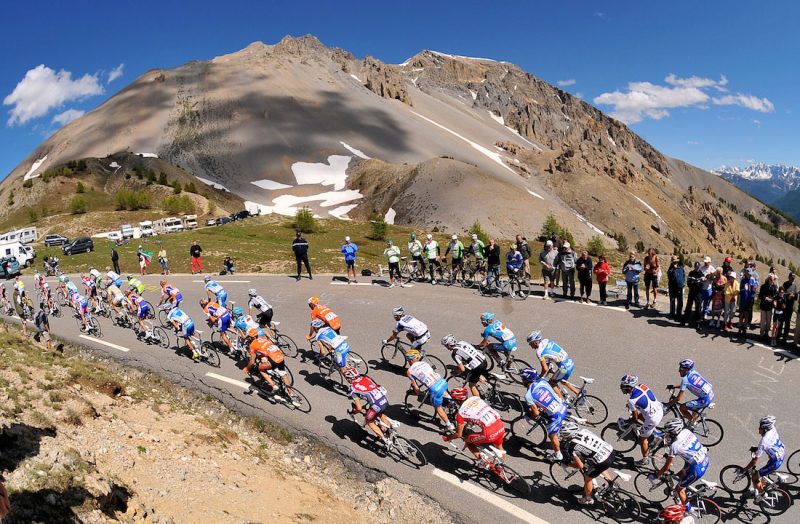 The Tour de France, the most famous cycling race in the world, is now over 100 years old. The 2017 Tour de France will be the 104th edition of the event. 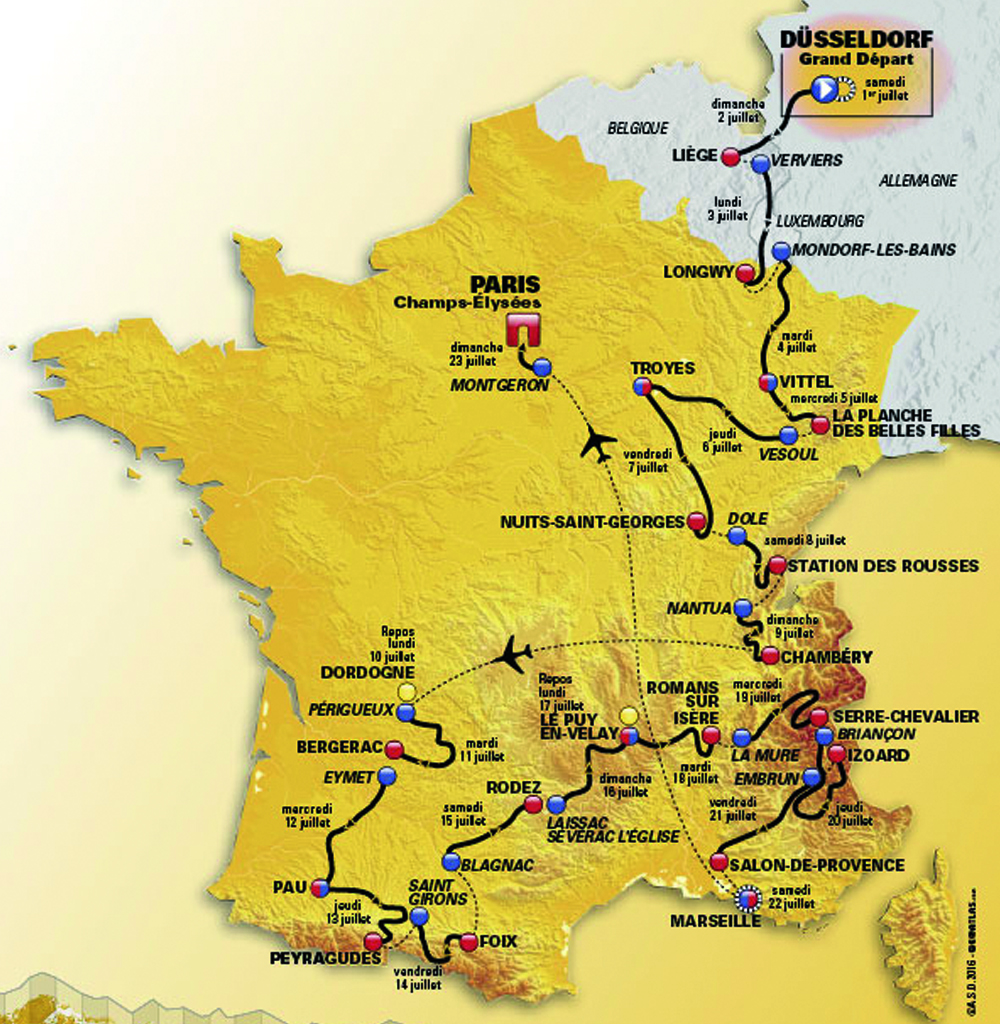 There will be a total of 21 stages throughout the race with two rest days and these fall between stages 9 and 10 and stages 15 and 16. The stages are split into six different categories. In total, there will be 2 individual time trials, 8 flat stages, 5 summit finish stages, 3 mountain stages, 2 hilly stages and a single medium-mountain stage.

The race starts in Germany and progresses through the country into Belgium on day 2 and 3 before arriving in Luxembourg on day 4. Stage 5 is the first of the 2017 Tour de France to take place solely in France.

With only 3 mountain stages and 36.5 kilometres of time trialling, anyone hoping to claim the coveted Yellow Jersey must be creative in the way they make time on the other cyclists. 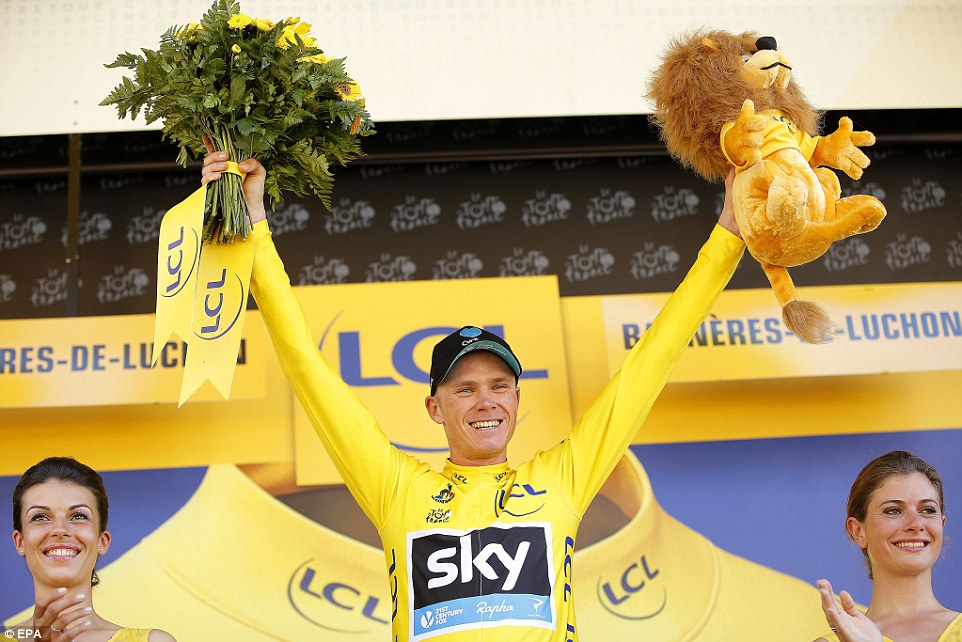 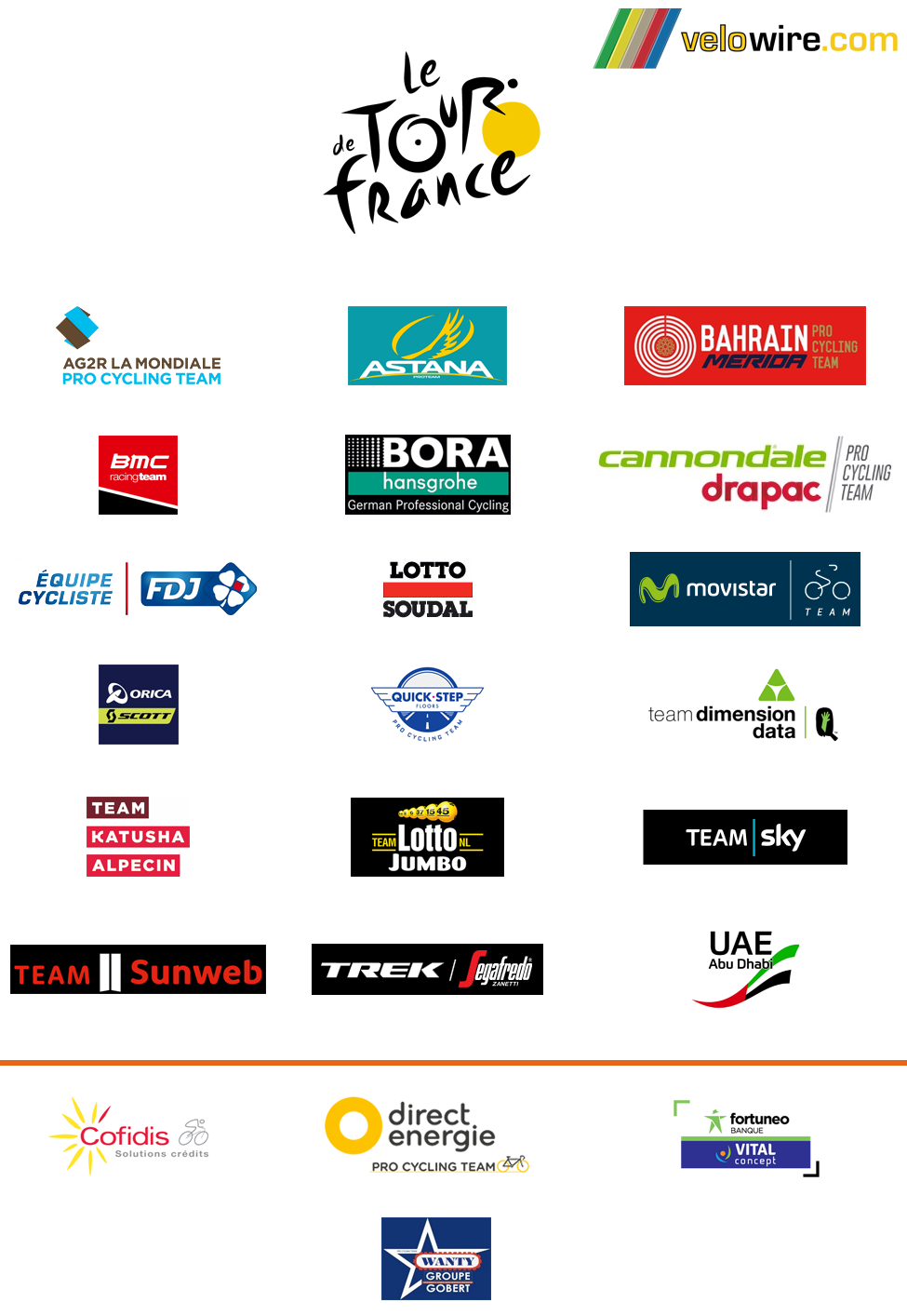 The defending general classification winner is Chris Froome of Team Sky. The British cyclist has won the previous two editions of the race and three of the last four with Vincenzo Nibali being the only rider to prevent him from making it four in a row.

With Lance Armstrong’s results banished from the history books, Froome can become the only the third person to reach four Tour de France victories. A win this time around would move him one closer to the record holders currently on five, which are none other than Miguel Indurain and Bernard Hinault. However, his form this year has not been great.

Froome has not won a race since September 2016 and each of his previous Tour de France victories have been proceeded by a win at the Criterium de Dauphine. He struggled at the Tour de Romandie and complained about small back issues during the race. This plus the UK Anti-doping inquiry into Team Sky and British Cycling has not helped Froome in his preparations for the Tour de France this year.

There is nothing to suggest from this year that Froome is a man primed to win the 2017 Tour de France but his record suggests he will be in contention. Froome remains the favourite at 11/8 with William Hill to win the race. 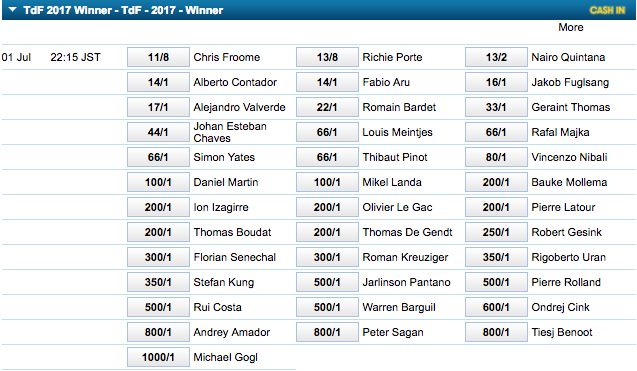 So, if Froome does not win his fourth Tour de France, who could step up and win the race? Richie Porte has looked the most impressive cyclist this year. The Australian has looked unbeatable for much of the season but having been put to the sword by his rivals at the Criterium du Dauphine, he will need his team to be in top form in the Tour de France.

Interestingly, while the likes of Froome went to Sestriere for more altitude training after the Dauphine, Porte decided to return home to Monaco to spend time with his family. Porte may have out time-trialled and out-climbed Froome at the Dauphine but has yet to show he can put together a sustained three weeks of good, consistent form together to win the Tour de France.

At odds of 13/8 with William Hill, Porte seems a little short and does not represent good value in the betting for the 2017 Tour de France.

Colombian rider Nairo Quintana claimed his first Grand Tour victory at the 2014 Giro d’Italia having finished second in the previous year’s Tour de France. It seemed only a matter of time before Quintana won the Tour de France but a second finish in 2015 and third in 2016 means it has remained out of reach.

Having taken the decision to race the 2017 Giro d’Italia, where he finished second, Quintana has damaged his chances of winning the Tour de France this year. He does not seem to have the confidence of a man who believes he can win the Tour de France and the way he was outridden by Tom Dumoulin in the Giro will not have helped.

Quintana will have a chance if he is still in contention come the final week but much like in his victory at the Vuelta last year, the Colombian will be relying on Froome and Team Sky failing to produce the goods as much as his own team and personal performance. Quintana is available at 13/2 with bookmaker William Hill to win the 2017 Tour de France, which is about right. 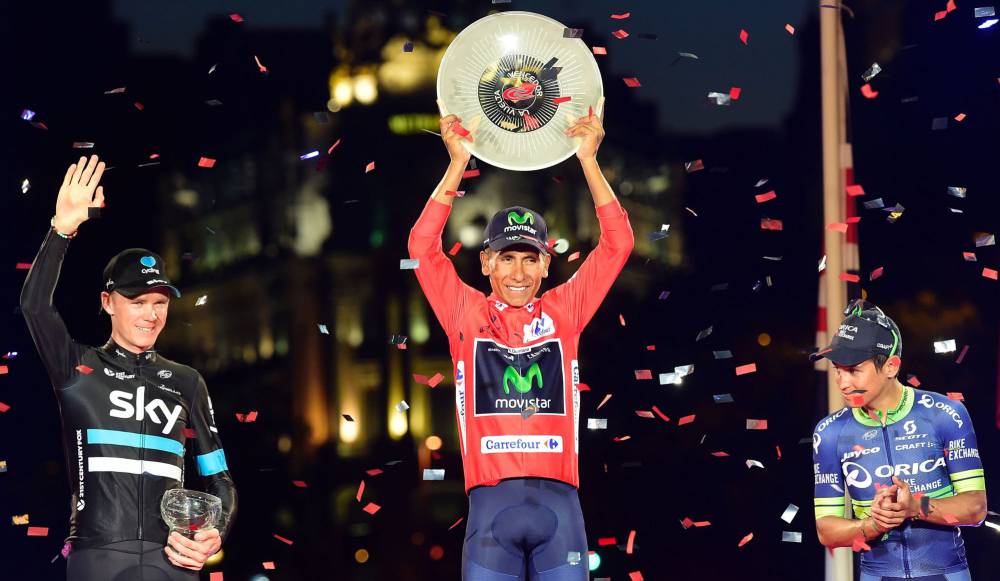 Many of the other general classification candidates followed Quintana’s lead in targeting the Giro this year. The likes of Vincenzo Nibali, Thibaut Pinot, Steven Kruijswijk and Tom Dumoulin probably saw the race in Italy as their best chance of winning a Grand Tour event. Dumoulin, who claimed the victory, will miss this race as a result. Nibali has not been named in the provisional list by his team Bahrain-Merida and Pinot is out at 66/1 with William Hill, which underlines his very slim chances at the 2017 Tour de France.

Looking elsewhere and Fabio Aru, the 2015 Vuelta winner, missed the Giro d’Italia due to injury. The Italian was focused on the Giro so to miss it was a blow and he will share the Astana team captaincy with Jakob Fulsang, who was originally planned to be Astana’s rider in the Tour de France this year. How the dual captaincy will work out remains to be seen and both riders are on offer at 14/1 with William Hill, which is a fair reflection of their chances. 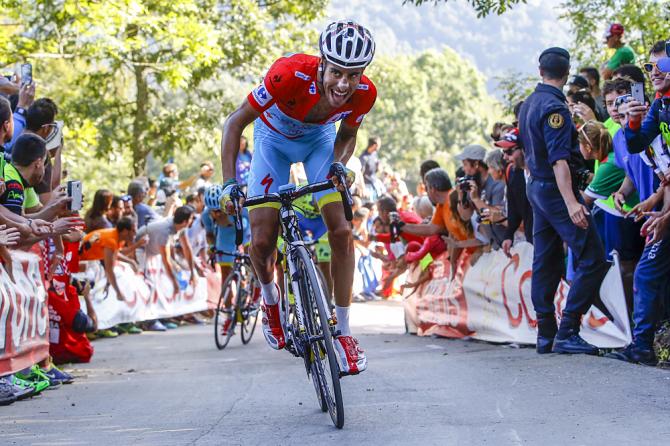 This leaves us with the experienced Alberto Contador and Romain Bardet as possible winners of the 2017 Tour de France.

Contador is a name which is sure to be present throughout the race, especially on the major climbs. The Spaniard will attempt to unsettle Chris Froome but his powers are not what they used to be and at the age of 34, this will be a big ask for Contador. Even at odds of 14/1, it is difficult to back the two-time Tour de France winner to add a third victory to his impressive CV.

Romain Bardet finished second in the Tour de France last year but his time trial is still the weak aspect of his cycling. The opening stage in Dusseldorf, in addition to the flat time trail on the penultimate stage in Marseille, could see the Frenchman lose a lot of time from which he will struggle to recover. At odds of 22/1, Bardet would have to produce something special in the mountain stages to win the 2017 Tour de France. 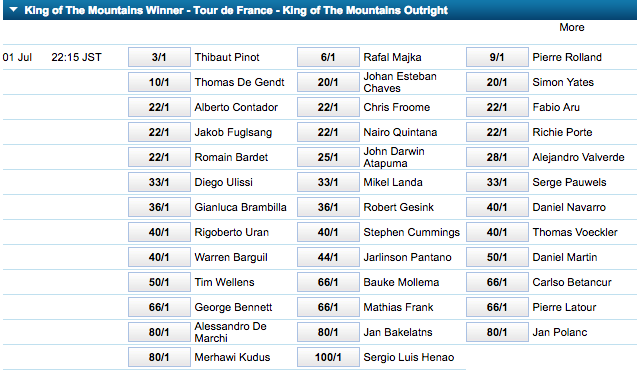 A brief look at some of the other classifications and Simon Yates makes a tempting bet at 6/5 with sportsbook William Hill to win the young rider classification in addition to a potential podium finish at odds of 18/1. In terms of the mountain stages, it is hard to look beyond Thibaut Pinot to finish as king of the mountains at 3/1.

However, when considering the general classification, it is one again Chris Froome’s to lose. The Team Sky rider has had a poor season but has shown some improvement in recent months and fortunately his main rivals do not appear to be at the required level to challenge. He knows what it takes to win this race and will be aiming to open a gap between himself and his rivals during the first five stages. If he does that his team should be able to keep any challengers at bay and Froome will win his fourth Tour de France.

Online sportsbook bet365 weighs-in on who are the favorites to win this year’s Giro. Can Nairo Quintana capture back the title?
【Podcast】Episode #10: Chinese Super League Kicks into High Gear! Can Anyone Stop Guangzhou Evergrande?
【Podcast】Episode #11: The Mid-Season Report Cards are In! Who Has the Best Chance to Lift the World Series Trophy?
Home
Cycling