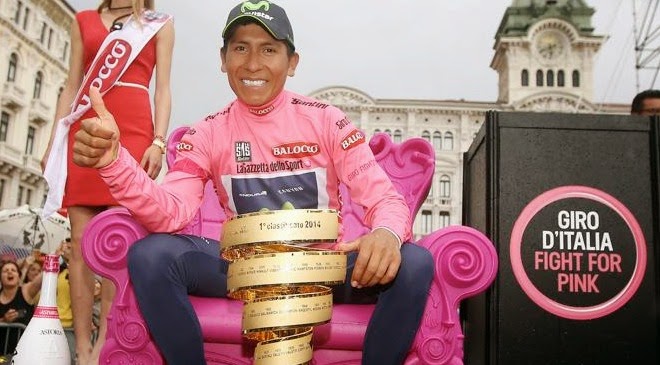 This year will witness the 98th running of the Giro d’Italia cycle race. One of the Grand Tour races, the 2015 Giro d’Italia will start on the 9th of May and end on the 1st of June. The fifteenth race in the 2015 UCI World Tour, the event will commence with a time trial in San Lorenzo al Mare and will conclude with a flat stage in Milan.

The route of the race changes each year but the actual format of the race always stays the same. There are always at least two time trial stages and that will be the case again in 2015. There is also a section which passes through the Alps, which includes the Italian Dolomites, and this year, there will be a total of five mountain stages. In addition to the two time trials and five mountain stages, there will be seven flat stages and seven medium-mountain stages comprising of a total of 21 stages. There will be two rest days during the 2015 Giro d’Italia, one after stage 9 and the other after stage 15 of the race. 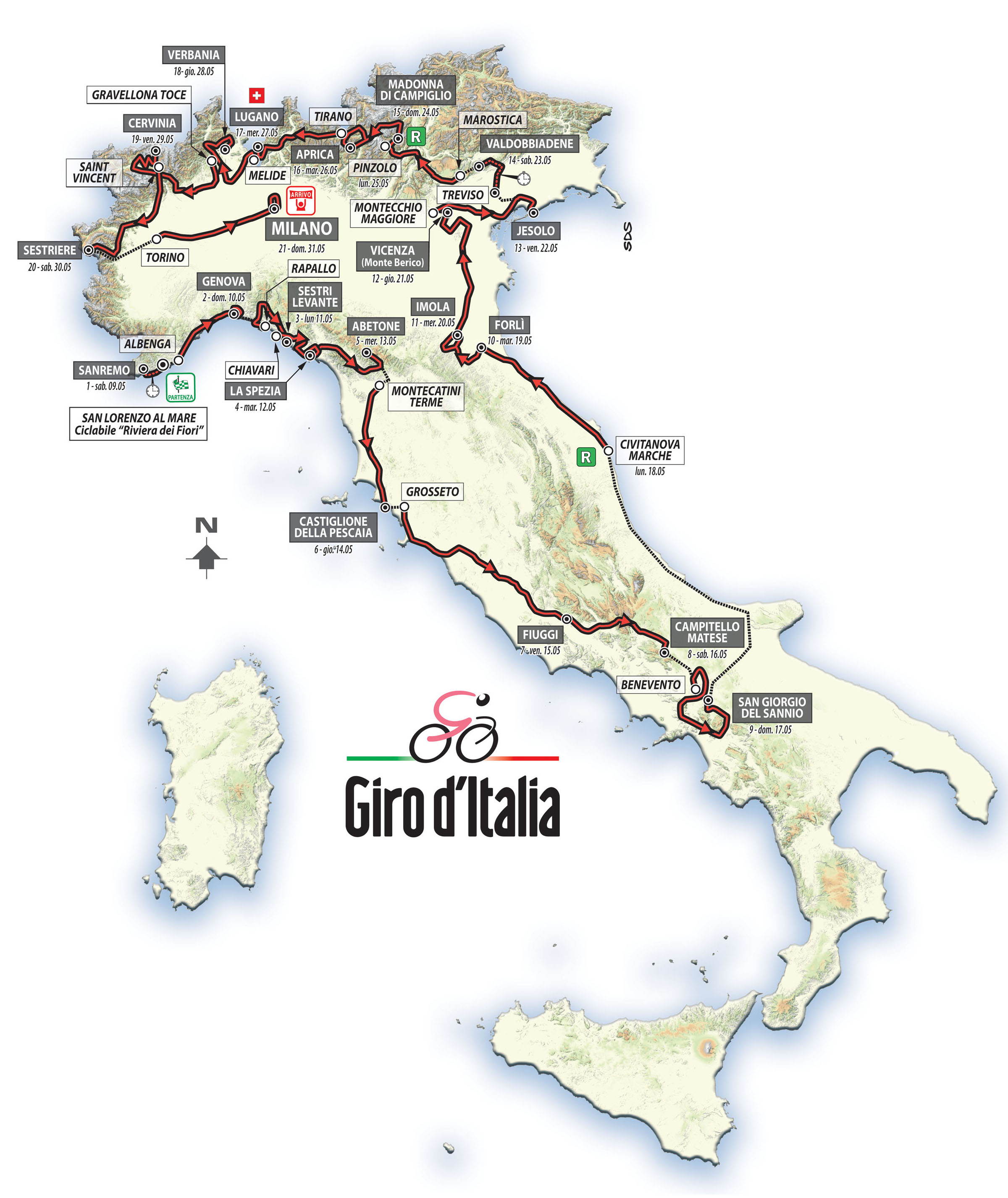 During the course of the 2015 Giro d’Italia there will be four different jerseys awarded. The general classification, which is calculated by adding the finishing times of each cyclist at the end of every stage, is what’s used to determine the final winner of the event. During the course of the race the leader will wear the pink jersey. The 2014 Giro d’Italia was won by Colombian Nairo Quintana of the Movistar Team team who became the first Colombian ever to win the race.

In total, there are 17 UCI World Tour teams that automatically qualified and 5 wild-card teams, each of which received invitations to take part. Therefore, there will be 22 teams competing with 9 cyclists within each team for this year’s competition.

Of all the teams and cyclists, there are a few names that stand out as real contenders to lift the 2015 Giro d’Italia title. They are Alberto Contador of Tinkoff Saxo, 2014 runner-up Rigoberto Uran of Etixx Quickstep, Richie Porte of Team Sky and Fabio Aru of Astana. A look at the odds shows these four cyclists at the top of the list although one name stands above all others and that’s Alberto Contador. 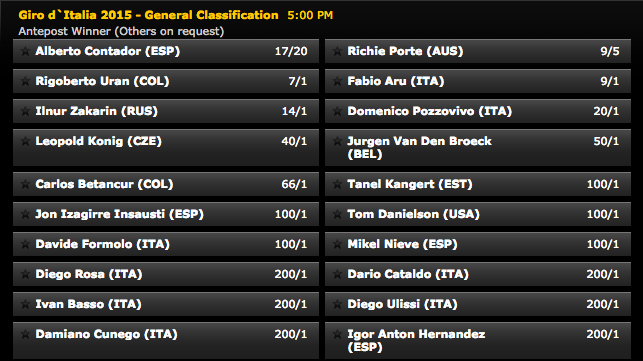 The Spaniard, Alberto Contador, is the favorite for the Giro d’Italia General Classification at 17/20 with Bwin. Having won last year’s Vuelta A Espana and the 2008 Giro d’Italia, Contador has previous experience and knows what it takes to win this race. At the same time it would be wise to mention that he has also missed a lot of racing due to testing positive for Clenbuterol in 2010. Failure of the test meant that he was stripped of his 2011 Giro d’Italia tour title, which Contador won in great style.

Fast forwarding to this year, the Spaniard has looked dominant, so much so that he has not dismissed the chance of taking a Giro d’Italia and Tour de France double in 2015. It could be Contador’s last chance to achieve what would be a huge feat in cycling. The betting odds play to his favor with him being the clear favorite to complete the first leg of that double in Milan on the 1st of June. 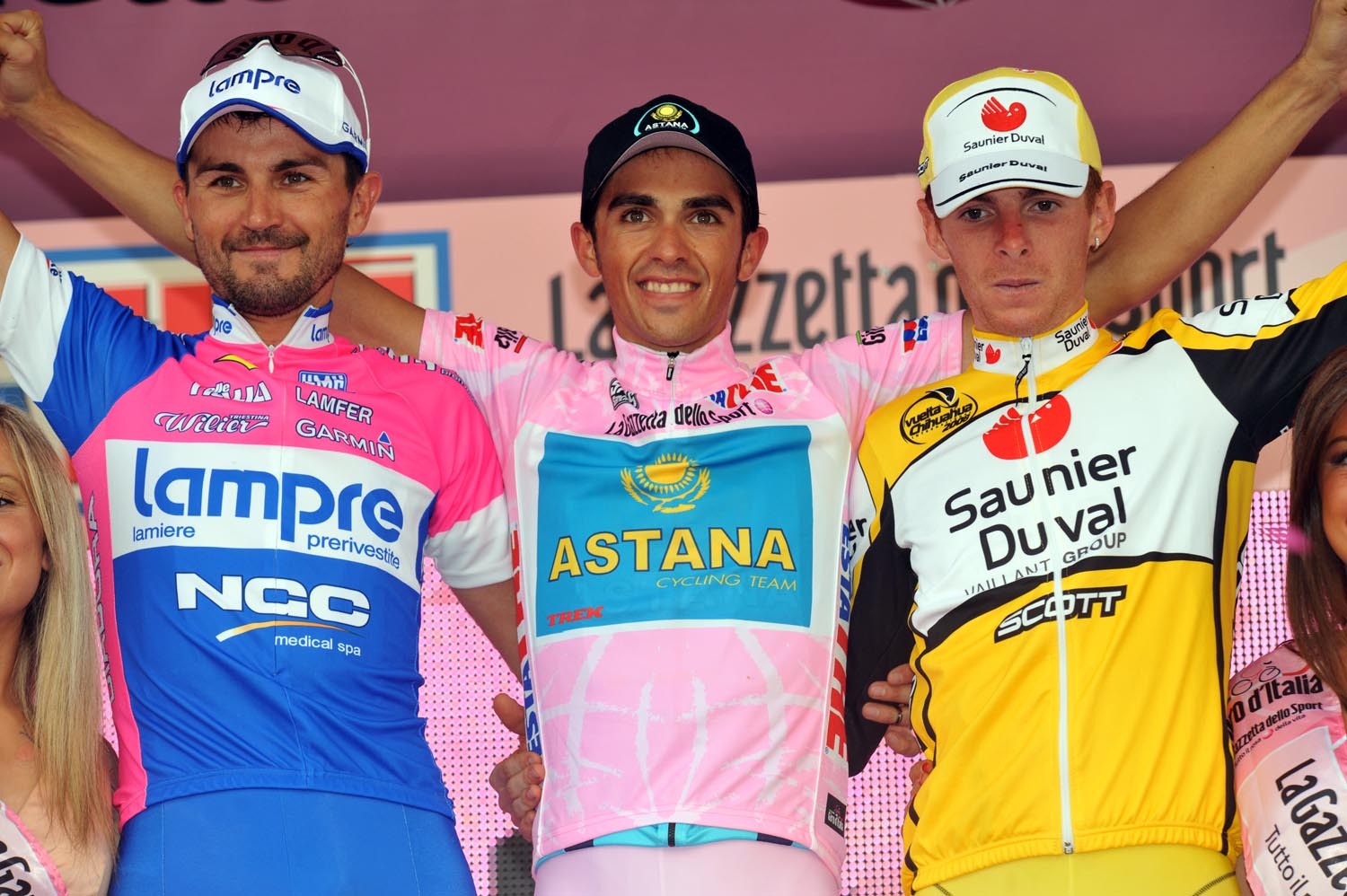 Of the three main threats to Contador’s ambition of claiming a second Giro d’Italia General Classification, Fabio Aru probably represents the best value at 10/1 with Unibet and is Italy’s best chance of a winner since Vicenzo Nibali in 2013. With just 15 days of racing in his legs, Aru will have the weight of the nation on his young shoulders. As Nibali will not be taking part, Aru will be hoping that the illness he suffered recently has not set him back too far. With a strong team who seem to be behind him, Aru could be a good bet to seal his first Giro d’Italia title at the young age of 24.

According to the bookmakers, Contador’s biggest rival this year will be Richie Porte of Team Sky. Porte won the Young Riders Classification in 2011 and went on to win Paris-Nice in 2013, however illness played a large part in Porte’s 2014 season. But with a new year upon us, the Australian has looked his best so far this year.

Porte will have a good team behind him and will have to respond to the pressure that comes with leading Team Sky in such a big event. The big test for Porte will come in the third week but if he is in a good position prior to the mountain stages, winning the General Classification is not out of the question. Porte can be backed at 9/4 with Unibet. 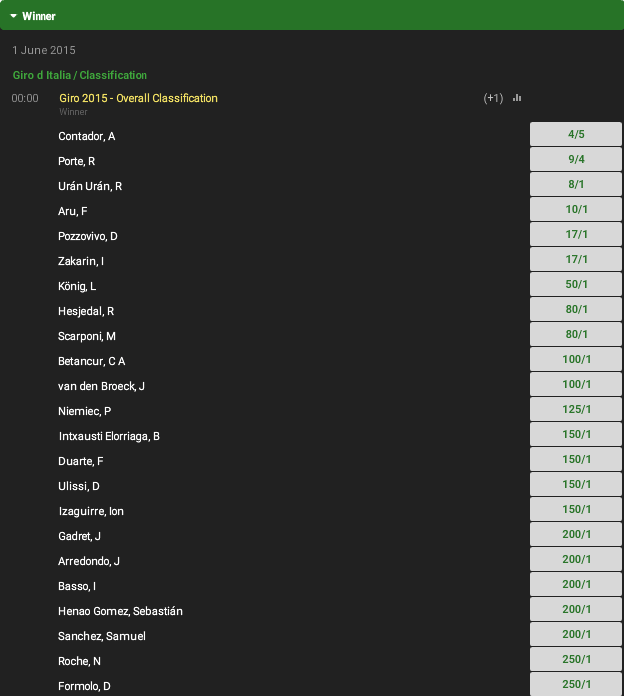 Despite coming in with odds of 8/1 at bookie Unibet, Rigoberto Uran of Etixx Quickstep could be the man to ensure that Colombia wins their second Giro d’Italia in succession. Uran has finished runner-up at this event for the past two years and the Colombian will be targeting the time-trial as an area he can gain time on his closest rivals such as Contador and Porte. However it has to be said that there are still doubts over how durable a racer Uran really is. Can he prove the naysayers wrong?

Having had the honor of being the first Colombian to wear the Maglia Rosa, which he did in 2014, Uran will need to put together some strong performances similar to the one he had in stage 12 of the 2014 Giro d’Italia if he is to ensure a victory in this year’s edition.

Looking outside the top four contenders discussed above, Canadian Ryder Hesjedal could cause a stir at 80/1 with sportsbook Unibet. This is likely to be Hesjedal’s final year at the Giro d’Italia and having won the event in 2012, he will be determined to go out on a high. Elsewhere, Domenico Pozzovivo will have home field advantage and if the Italian can remain consistent, he could be a worthy outsider at 17/1.

However, the fact remains that Alberto Contador is the marked man to win the grand classification at the 2015 Giro d’Italia. Having already spoken of winning both the Giro d’Italia and Tour de France this year, Contador is either trying to psych out his opponents or is feeling fit and confident. If the Spaniard is at his best, there is no one in the field who can go toe-to-toe with him.

Will Contador ride to glory? Watch all the action unfold as the best of the best in the cycling world battle it out road in Italy!

Bookie Betfred covers the favorites expected to challenge for this year’s Tour de France. Can Froome repeat as champ or will Quintana & Co. knock him off?
【Bookmaker】Money vs. Pac Man: And the “Fight of the Century” Odds are on…
【mybet】Will The Serbinator Finally Taste the Glory a of Grand Slam? The Linemakers Weigh In!
Home
Cycling