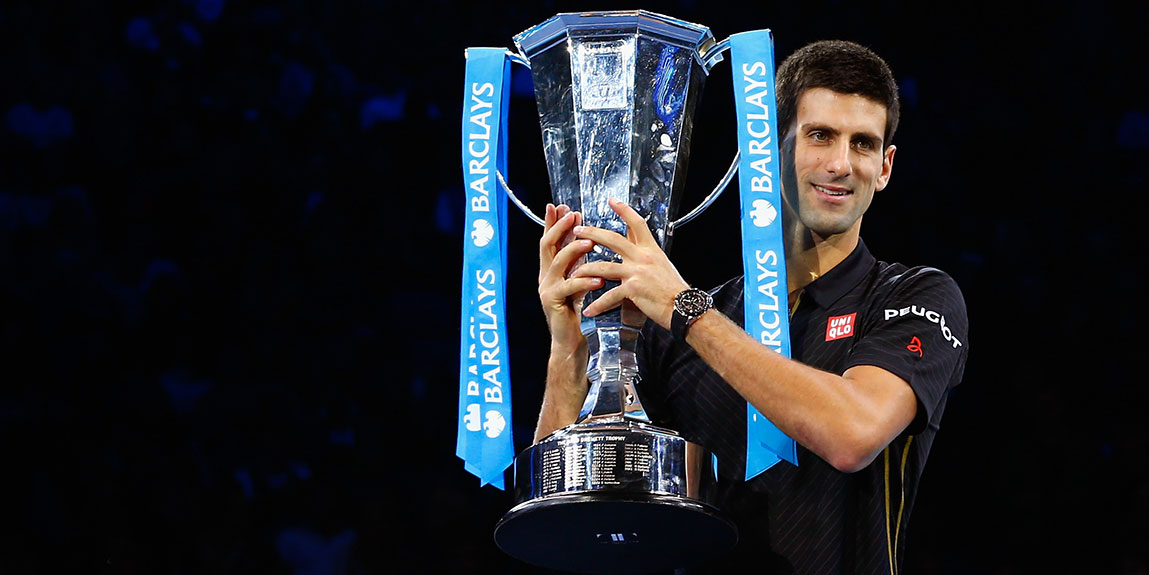 The 2015 Barclays ATP World Tour Finals will be played between the 15th and 22nd of November and will be the 46th time the tournament has been contested. The event will be hosted by London, in the O2 Arena and it’s the 7th time the ATP World Tour Finals has been staged in the 17,500 capacity arena. There are two more years left on the contract before the finals will be moved to a different location but the surface, indoor hard court, should remain the same.

The ATP World Tour Finals is the last event on the ATP Tour calendar and features the top eight players in the ATP Tour rankings following the final event of the season, which was the Paris Masters. The eight players are split in to two groups of four and will play each other in a round robin format, with the top two from each group progressing to the semi-final stage. The tournament is then pure knockout with the two semi-final winners contesting in the final. Previous winners of this event include Ilie Nastase, Jimmy Connors, John McEnroe, Bjorn Borg, Ivan Lendl, Boris Becker, Andre Agassi, Pete Sampras, Roger Federer and Novak Djokovic. 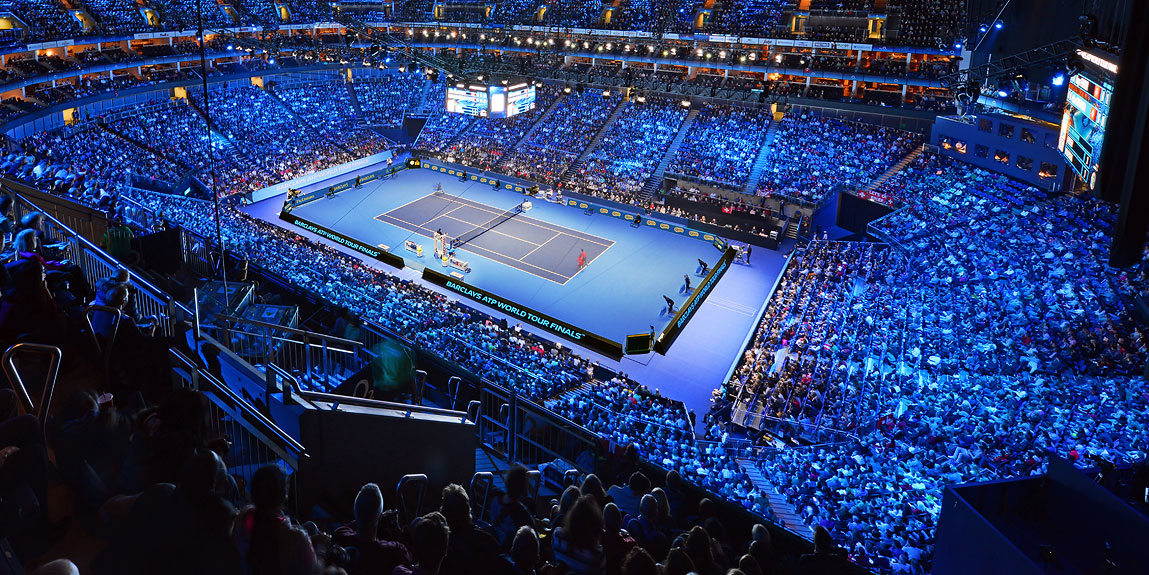 The defending champion coming in to the 2015 ATP World Tour Finals is Novak Djokovic. The current world number one has won the season ending event four times, including the last three in a row, and has a chance of making history by winning four consecutive titles this year. Also in the field this year is record six time winner Roger Federer, who will be appearing in the event for the 14th time and in doing so will hold the record for the most individual entries. Home crowd favourite Andy Murray is also in the hat and will be joined by Stan Wawrinka, Rafael Nadal, Tomas Berdych, Kei Nishikori and David Ferrer. 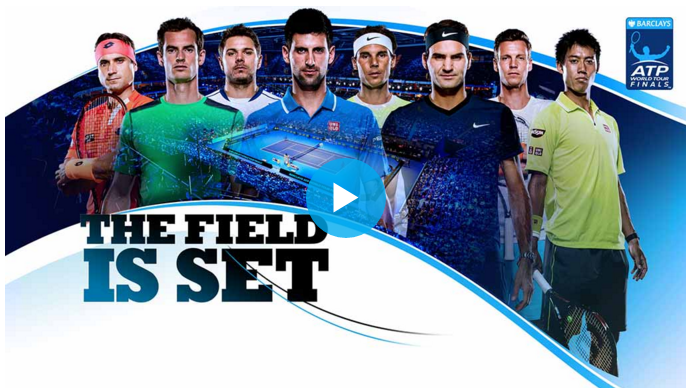 It will come as little shock that Novak Djokovic will start the 2015 ATP World Tour Finals as the favourite and is priced at 4/9 with 888sport to go all the way for the fourth year in a row. A glance over the Serbian’s record this year makes for a hugely impressive reading and it’s easy to see why Djokovic has classed 2015 as being the best year of his career. Three Grand Slam victories plus reaching the final in Roland Garros is a massive achievement even though that loss in the French Open final will still be hurting. Five other ATP World Tour Masters 1000 titles, including Indian Wells, Miami, Rome, Shanghai and most recently Paris, in addition to wins at Monte Carlo and China really highlight what a fantastic season it has been for Djokovic. If anything, the defeat to Stan Wawrinka at the French Open will act as a spur for the Serb to keep pushing himself to the limit, which is bad news for every other player on tour. 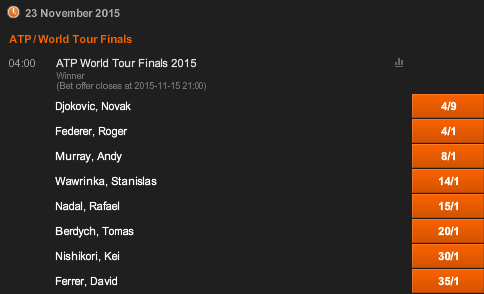 Coming in as second in the ATP Tour rankings is Andy Murray. While it may not have been the Scot’s best season of his career, Murray has still made some important accomplishments in 2015. Titles this season include the Madrid Open and Rodgers Cup, both ATP World Tour Masters 1000 events. Murray also won the Aegon Championships, BWM Open and reached the final of the Australian Open losing out to Novak Djokovic in the final. If this was a normal end of the year finals for Murray, you would back him to make the final, however, the Scot has other things on his mind, namely the Davis Cup final. By practicing on clay, the surface on which the Davis Cup final will be played, prior to playing the ATP World Tour Finals, Murray has essentially shown where his priorities lie. Therefore, at evens to fail to make the semi-final, it may be worth betting on Murray to be eliminated at the group stages, as he was last season. 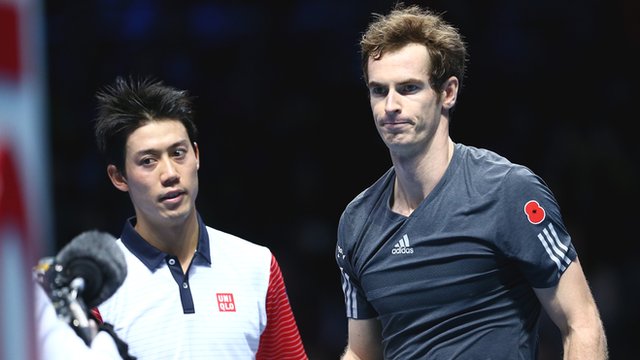 With Murray’s attention occupied by events elsewhere, we have to look further down the list of qualifiers to find someone who is capable of defeating Djokovic. Many people are waiting for Roger Federer to announce his retirement as opposed to when his next tournament victory is going to be but the 34 year old continues to defy those who question his age. This was no more evident than at the recent Swiss Indoor tournament in Basel, where Federer defeated Rafael Nadal in the final to win a tournament that included the likes of Stan Wawrinka, Marin Cilic and Kevin Anderson. The Swiss legend has won a number of ATP World Tour Masters 500 tournaments, plus the Western Southern Open in addition to making the final of both Wimbledon and the US Open. Federer has made the final twice at the last three ATP World Tour Finals but was forced to withdraw due to injury in 2014. However, at 4/1 with 888Sport to win the event, Federer provides good value.

Outside of Djokovic and Federer, Stan Wawrinka may be the man to come out on top at the O2 Arena this year. The Swiss number two has already shown he has what it takes to defeat Djokovic on the biggest stage, when he claimed the French Open title this year beating the Serbian in the final at Roland Garros. Wawrinka has also won three ATP 500 titles this year and made the semi-finals of both the Australian Open and US Open. Defeat in the first round of the recent Swiss Indoors has not helped but it has pushed Wawrinka’s price out slightly and at 14/1, he could be the pick of the outsiders. 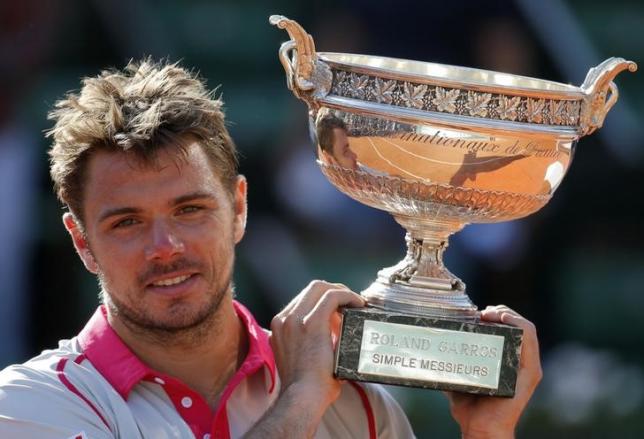 Both Rafael Nadal and Tomas Berdych have not enjoyed a good 2015 season and Nadal in particular has probably had his worst year for some time. However, both players have come in to a bit of form towards the end of the season and will start the 2015 ATP World Tour finals in possibly their best form this year. Since October, Berdych has won two ATP 500 titles, in Shenzhen and Stockholm, and Nadal has reached the final in Beijing and Basel, which will give both players some added confidence ahead of the finals. Nadal is available at 15/1 while Berdych is on offer at 20/1 with 888Sport to win the 2015 ATP World Tour Finals. 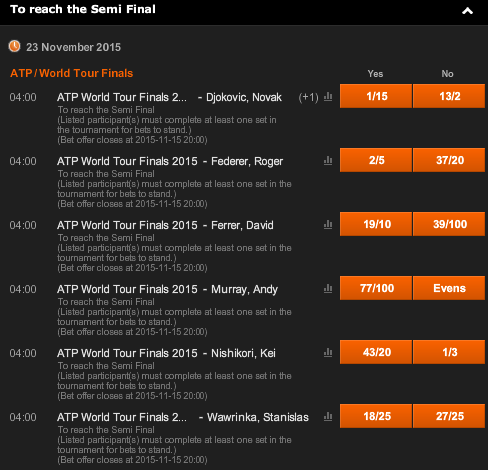 David Ferrer is also a man coming to London off the back of a couple of tournament victories having won in Kuala Lumpur and Vienna. However, performances in the major tournaments have not been great with his best showing being a quarter-final appearance at the Australian Open. With odds of 35/1 to win the end of season event, the oddsmakers have taken into consideration his performance over the past year.

Finally, Japanese star Kei Nishikori has enjoyed a good 2015 winning three tournaments and also reaching the quarter-finals of two grand slams, which makes this season his best to date. Despite losing in the first round at Flushing Meadows, Nishikori has the ability to play well on the hard court surface having reached the final of the same tournament in 2014. Nishikori may not have what it takes to win the ATP World Tour Finals but is certainly a good bet at 43/20 to make the semi-final stage.

With Andy Murray’s focus elsewhere, there appears to be little to stop Novak Djokovic from claiming a record fourth straight ATP World Tour Finals title. Roger Federer is the best bet to de-throne the world number one and depending on Murray’s appearance, they could meet in the final. Outside of these players, Stan Wawrinka has proven he can defeat the best on his day this season and could offer the biggest threat to the dominance of Djokovic. However, to pick one player to win the 2015 ATP World Tour Finals, it would be foolish to look away from the world number one. 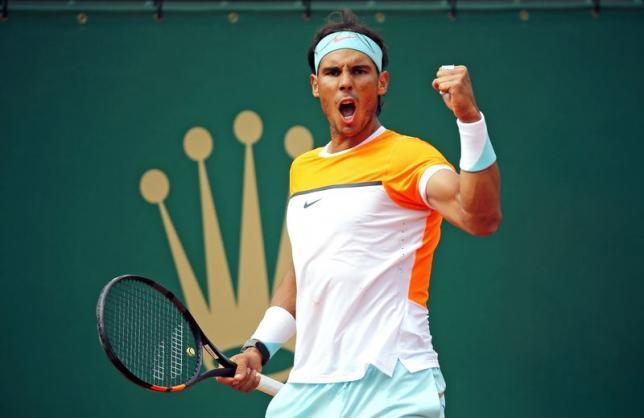 Can Nadal win for the 10th time in the past 11 years? "The City of Lights" plays center stage as the 2015 French Open rolls into town!
【Paddy Power】3 Done, Going for 4! Will Toulon Once Again Be Crowned European Champs?
【bet365】2015 Hong Kong Open: Will Saina Nehwal Get Revenge on Li Xuerui? Can Lee Chong Wei Pull Off Another Stunner?
Home
Tennis