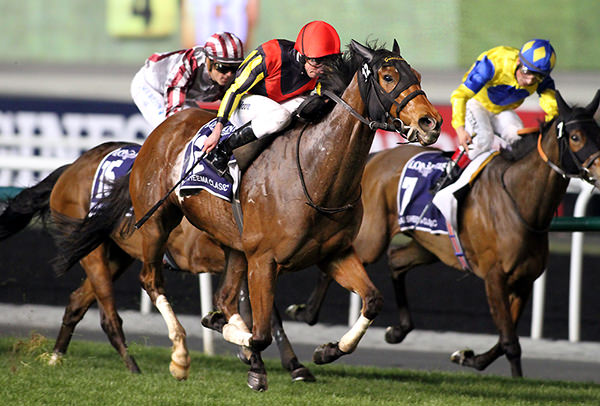 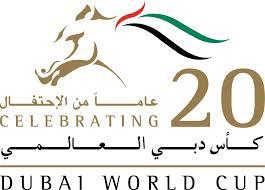 The Dubai World Cup was the dream child of Sheikh Mohammed, Prime Minister of the United Arab Emirates and noted equestrian, back in 1996. The Sheikh wanted to gather the best horses from countries around the world and today the Dubai World Cup Night offers a card of eight thoroughbred races and the Dubai Kahayla Classic for pure Arabians with total purses approaching US$30 million. The marquee event, the Dubai World Cup contested at the classic 10 furlongs, is the world’s richest race with US$10 million at stake. 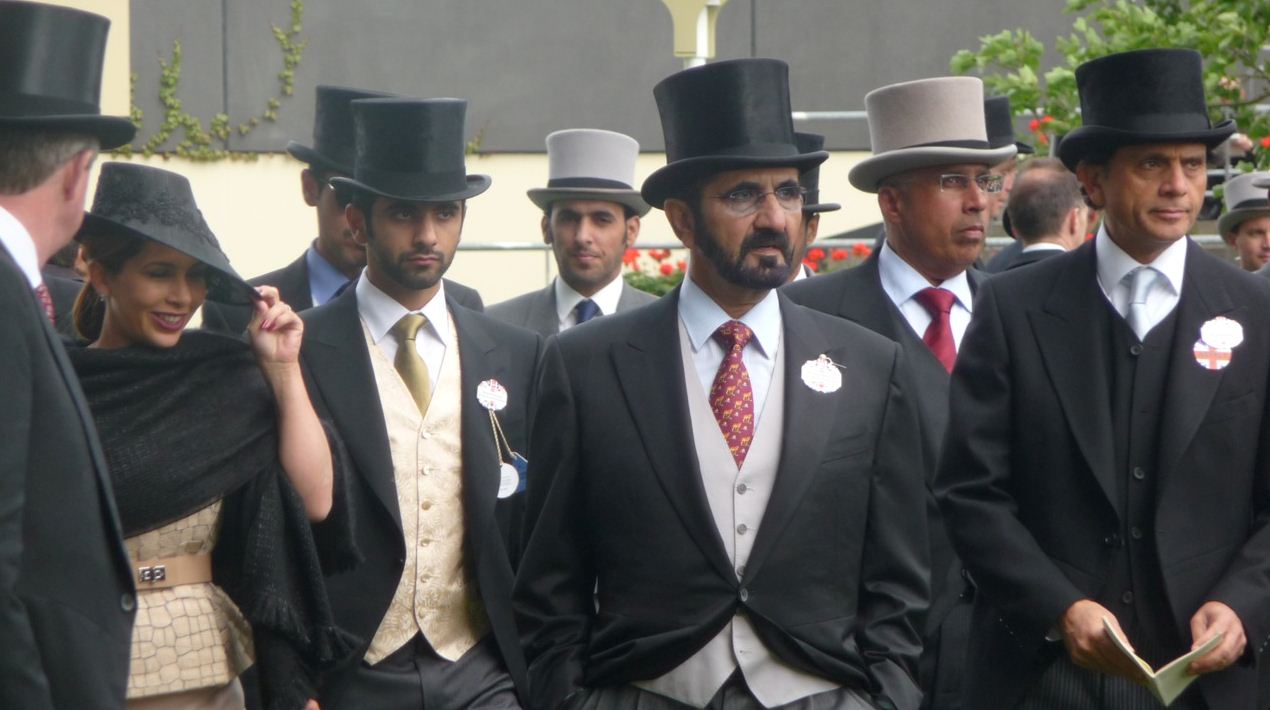 The Hall of Fame champion Cigar, then reigning Horse of the Year, bestowed instant credibility for the Dubai World Cup when he won that inaugural event in 1996. Before that time American horses were rarely shipped to another continent but Cigar returned to the States fit and frisky and continued his winning form. The precedent thus set, Kentucky Derby and Preakness Stakes winner Silver Charm captured the Dubai World Cup two years later and Curlin, North America’s all-time leading money winner, also took home the hefty gold trophy during his career. American horses dominated the first 14 years of the event, winning eight times.

But in 2010 the World Cup shifted to the newly constructed Meydan Racecourse – complete with the planet’s only five-star trackside hotel – which featured a synthetic sand-based racing surface. American trainers wary of the artificial surface began crossing Dubai off their racing schedules until in 2014 only three horses in training in the United States came to the United Arab Emirates and none were entered in the US$10 million showcase event. Suitably alarmed by this trend the Dubai Racing Club ripped out the Tapeta all-weather track and filled the oval with hoof-friendly dirt.

The result is that 16 American horses are shipping in for the 2015 Dubai World Cup on March 28, a contingent that would have been larger if not for injuries. Leading the Yankee invaders will be 2014 Triple Crown sensation California Chrome and six-year old Lea, a middling performer on grass early in his career who as an older horse has found his stride on dirt as a miler and nine-furlong horse. Reigning Horse of the Year California Chrome kicked off his four-year old campaign with a second place finish in the San Antonio Stakes at Santa Anita Park and British bookmaker Ladbrokes has installed the California-bred chestnut colt as an early line 5/4 favorite in the US $10 million Dubai World Cup. The only other colt carrying short odds to the starting gate will be Lea (7/2), trained by Bill Mott who saddled Cigar back in the 1990s. 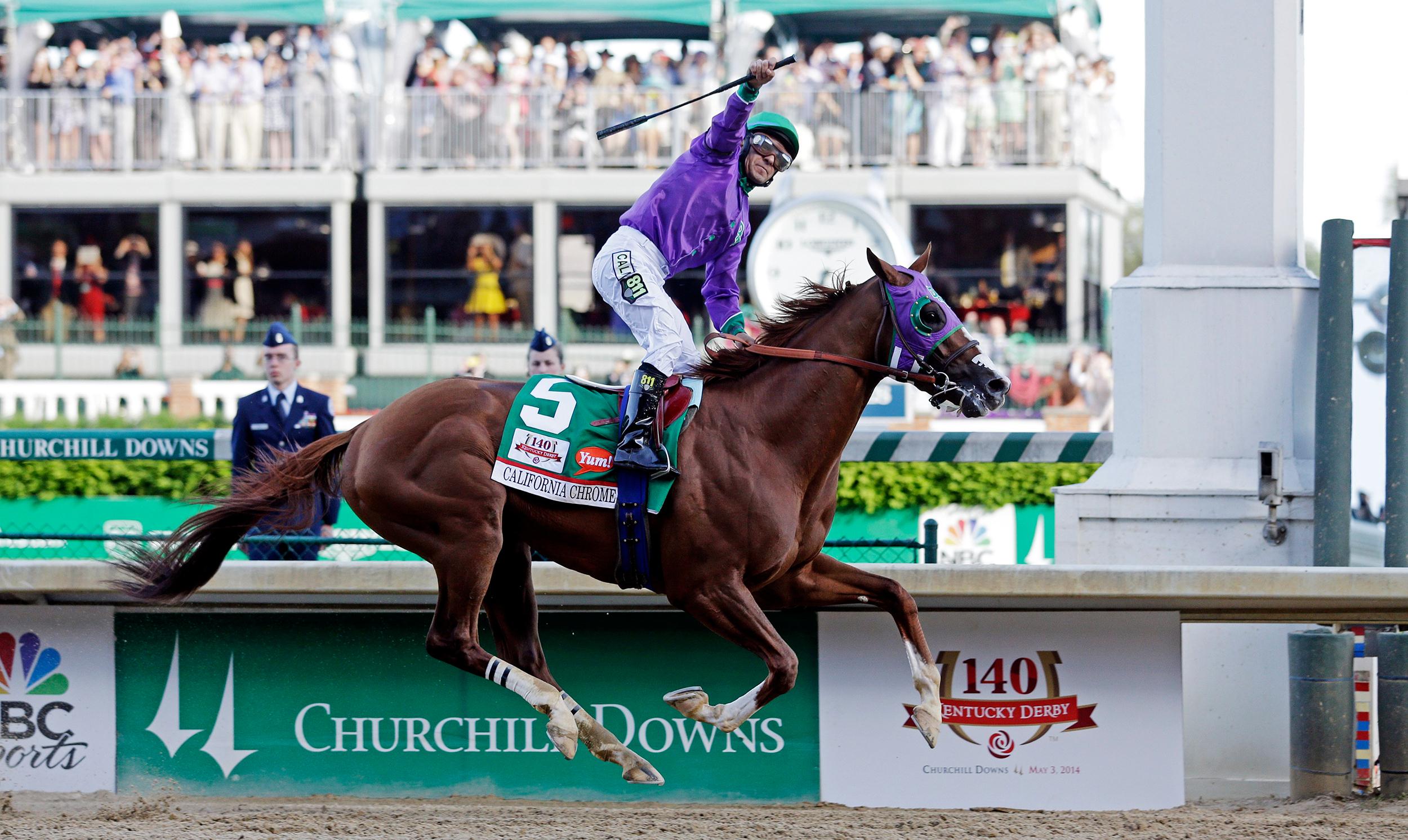 The blue racing silks of Godolphin, the racing stable founded by Sheikh Mohammed that has won the world’s richest race seven times, will be on the back of the defending Dubai World Cup champion, African Story. The eight-year old chestnut gelding set the track record at Meydan in a blistering 2:01.61 to best a sixteen-horse field last year at 12/1 odds. African Story has long thrived on the Tapeta surface but his first efforts in 2015 on the dirt left the defense of his title in doubt. A win in the Al Maktoum Challenge Round 3 in early March has inspired enough confidence in his backers to send African Story back to the Dubai World Cup. 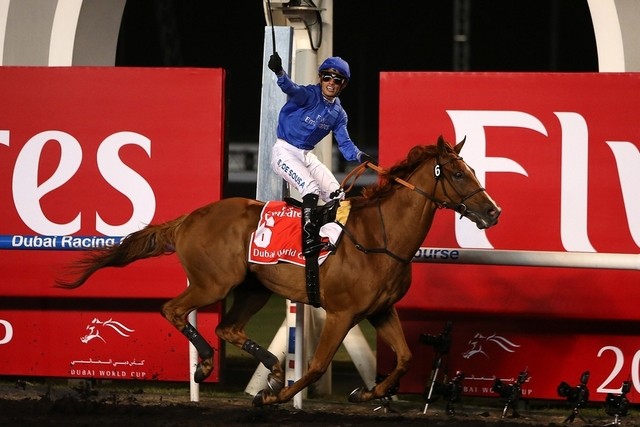 African Story is joined at 7/1 by Epiphaneia, the two-time Japanese Horse of the Year who is currently listed at number two in the World’s Best Racehorse Rankings, up from 83rd in 2013. The five-year old Japanese champion drubbed an 18-horse international field in last year’s Japan Cup at 1 1/2 miles and he will certainly be able to get the distance in the United Arab Emirates. His country mate Hokko Tarumae earned an invite to the Dubai World Cup with a stalking win in the Japan Cup Dirt in December, giving the five-year old colt an opportunity to avenge last year’s last place finish at Meydan; he is given a 10/1 chance by the punters in pre-race wagering. 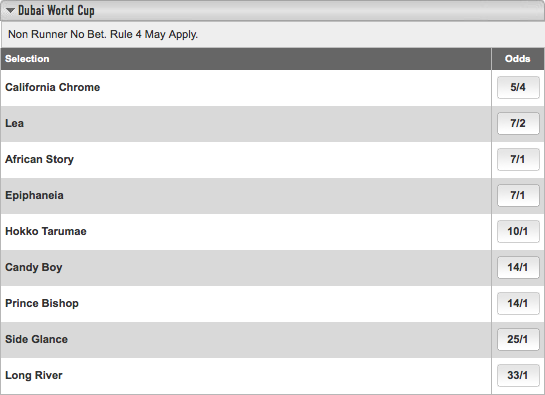 Also returning to Meydan will be Prince Bishop, racing in his fourth Dubai World Cup. The game campaigner owned by Sheik Mohammed has found his way to the winner’s circle in many Grade 2 and Grade 3 stakes events but has never finished higher than seventh in a Grade 1 stakes like the Dubai World Cup. Bookie Ladbrokes rates the eight-year old gelding no better than a 14/1 choice. Other probable starters for the 20th renewal of the world’s richest race include Candy Boy (14/1), an American runner recently sold to Dubai connections; Side Glance (25/1), another eight-year old gelding who has finished fourth in the last two World Cups at similar odds; and Long River (33/1) who has never won a graded stakes race. 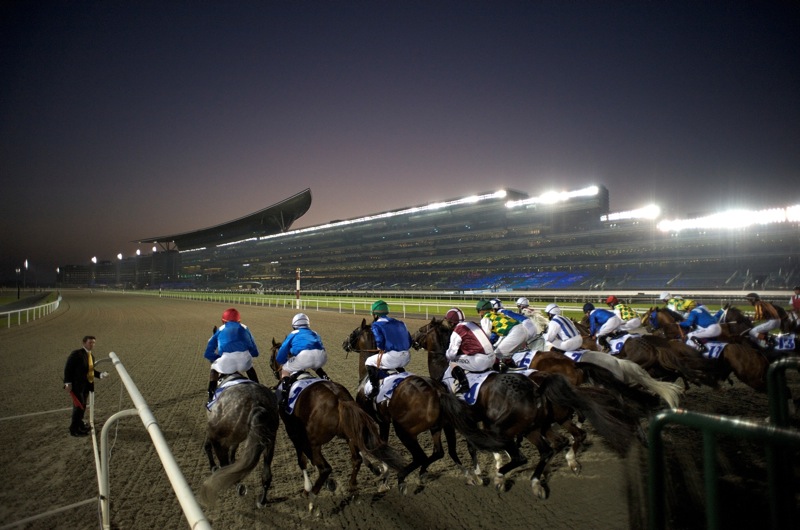 America’s Turf Horse of the Year, Main Sequence, is preparing to line up for the prime event of the undercard, the US$6 million Dubai Sheema Classic, covering about 1 1/2 miles on the turf. The Kentucky-bred colt spent his first three racing years in Europe before being gelded and sent to American tracks. He responded with victories in his first four starts – all Grade 1 events, including the Breeders’ Cup Turf. Even with those credentials, Main Sequence is priced at 9/2 odds against the likes of the Japanese filly Harp Star (5/2) and the French raider Flintshire (7/2). 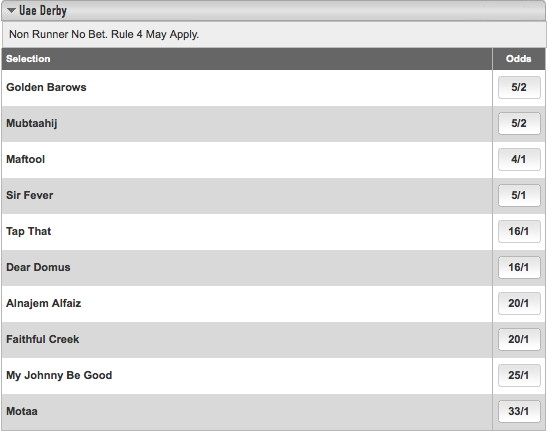 In the US$2 million UAE Derby, Golden Barows and Mubtaaji are co-favorites at Ladbrokes at 5/2 but they must contend with Sir Fever (5/1) who fetched a record price from United Arab Emigrates interests after winning the Uruguayan Triple Crown in 2014. The last horse to take all three legs of Uruguay’s best races was Invasor who won the Dubai World Cup in 2007. Unfortunately for his new owners, the previously undefeated Sir Fever suffered his first loss in his initial outing in Dubai earlier this year. 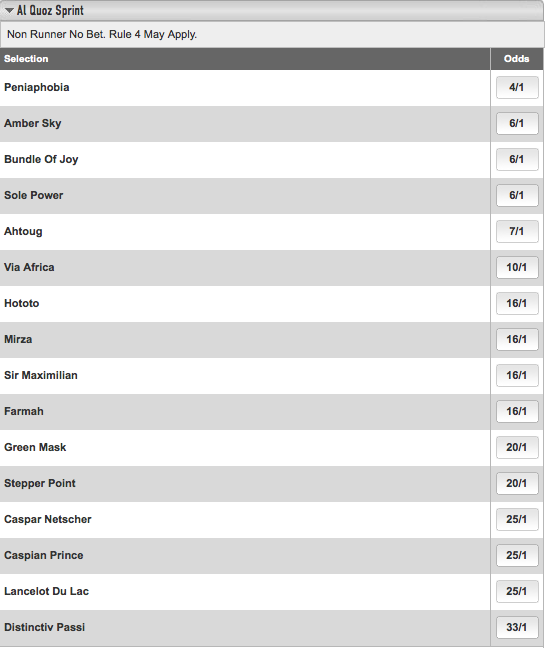 The Al Quoz Sprint at five furlongs on the turf for US$1 million is shaping up to be a wide open dash with Sole Power and Ahtoug, both runners-up in this event in the past, going off a 6/1 and 7/1, respectively. They will be dueling with a trio of quick-stepping Hong Kong Racing Club veterans – Peniaphobia (4/1), Bundle of Joy (6/1) and Amber Sky (6/1). Amber Sky set the track record in the Sprint in 2014. Look for local favorite Tamarkuz, Kentucky-bred and owned by Sheikh Hamdan bin Rashid, to go to the post with some of the shortest odds on the Dubai World Cup Night card in the Godolphin Mile. Tamarkuz (5/4) banged his head on a starting gate and lost a chunk of his prime racing years but has re-emerged to set track records in the Dubai World Cup Carnival that leads up to the richest day in racing on March 28. 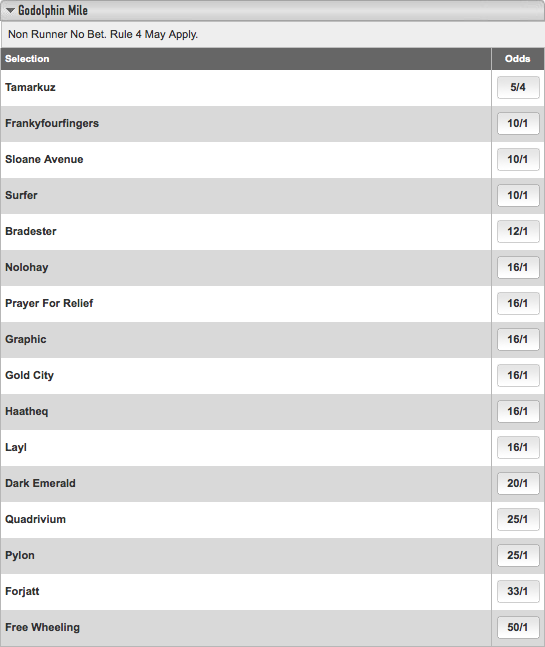 【bet365】2016 Ascot: Who are the Favourites of Britain’s Richest Racing Meet?

Can a JC Rouget trained horse ride to glory? UK sportsbook bet365 has the Queen Anne Stakes and the rest of the Ascot covered!

The 96th Running of the Prix de l’Arc de Triomphe: Can Enable Outlast the Field?

The best middle distance racers in horse racing head to Chantilly. Bookie bet365 provides insight into who’s favored to come out on top!