Thomas Cup, named after the successful badminton player from England – Sir George Alan Thomas, was first played in 1948-49 and won by the only contestant from the Pacific region – Malaysia. Also known as the World Men’s Team Championships, it is the most prestigious badminton tournament with respect to the number of players participating with Indonesia being the most successful country of the tournament with 13 titles to their name.

And for an interesting tidbit to take into consideration for those wanting to place a wager or two, after 29 editions no country from outside of Asia has been able to take home the title. 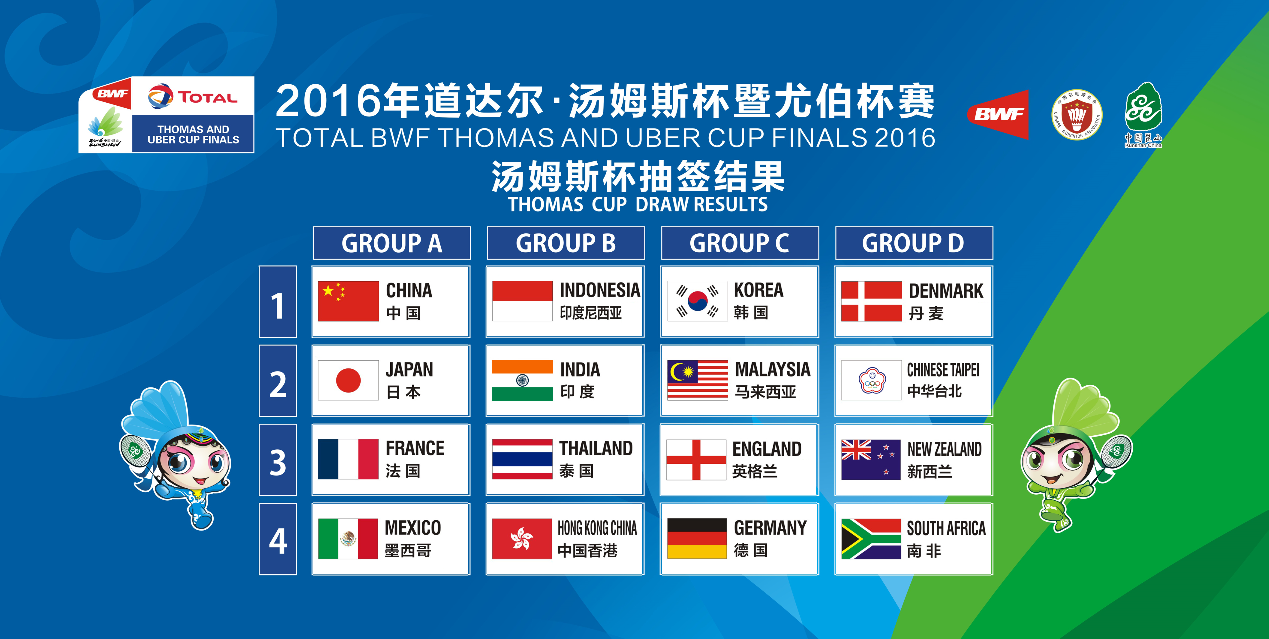 Meanwhile, the World Women’s Team Championships, more commonly known as the Uber Cup, started in 1956-57 and is almost similar to the men’s version of the competition.

The 2014 Thomas Cup was held at the Siri Fort Sports Complex in the Indian capital of New Delhi, which was the tournament venue for only the second time. The competition turned out to be one to remember as the finalist teams were entirely unexpected – Japan and Malaysia. If that is not enough, the world of badminton was shocked as Japan beat the favourites Malaysia, winner of 5 titles, in a closely fought 3-2 match to win their first ever Thomas Cup.

The 29th edition of this international tournament will return to China where it will be hosted by Kunshan Sports Center in Kunshan, the satellite city of Jiangsu province. The tournament will start from the 11th of May and the final will be played on the 22nd of May with all the matches taking place at the same venue. Sixteen teams qualified for the main tournament with Japan and China qualifying as defending champions and hosts respectively.

China will be hosting the event for the fourth time this year having previously served as hosts in 1998, 2002, and 2012. Emerging as the new powerhouse of badminton, China won the competition five consecutive times between 2002 and 2012. In 2014, they faced defeat in the semi-finals by Japan, who eventually went on to win the title.

Since entering the competition in 1982, China has never failed to qualify for the semi-finals. The Chinese team also won the competition in their first ever appearance in 1982 followed by consecutive titles in 1986, 1988, and 1990 as well. 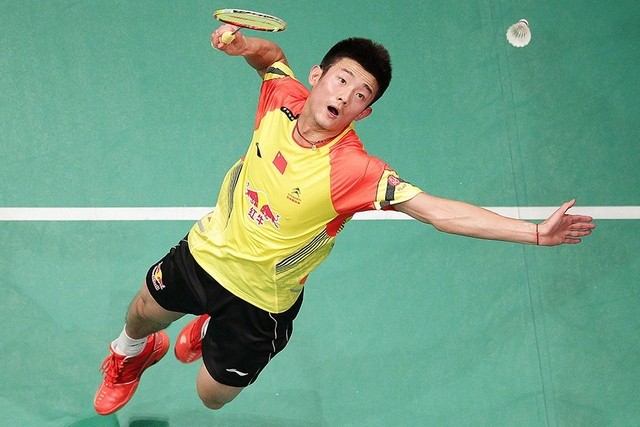 The Chinese city of Kunshan will prove to be an exciting place for this year’s tournament. The city is adjacent to over a forest park extending for more than 2.2 sq. km. The city boasts an eco-friendly environment with amazing food, the local seafood and desserts is not something to be missed.

The gymnasium of Kunshan Sports Center has a seating capacity of almost 6,000 with its game hall measuring 40m x 70m. The adjacent training hall is 20m x 80m making the facility an ideal venue for national as well as international sporting, cultural and artistic events. 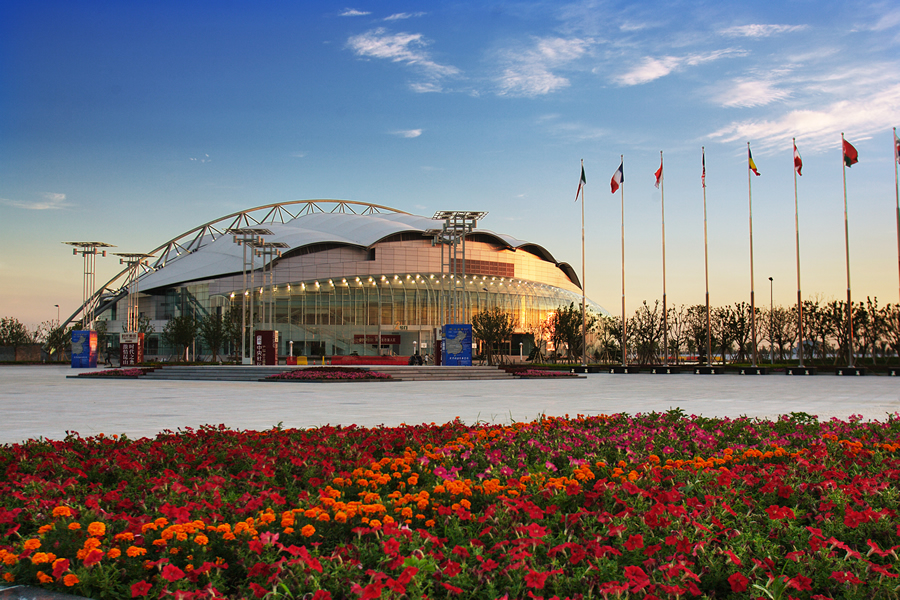 Among all the continents, Asia has the unwavering dominance in the badminton game. India, Indonesia, South Korea, and Malaysia qualified for this year’s competition in addition to China and Japan. Denmark is coming in as an experienced team having managed to qualify for the knockout stages in 28 of 29 editions of the competition. Representing the European continent, the Danish team is joined by Germany, England, and France.

Meanwhile, Chinese Taipei, Hong Kong, and Thailand, all teams from Asia, qualified for the main tournament through the world badminton team rankings as of the 3rd of March. From the regions of Pan Am, Oceania, and Africa, there is only one qualifier team in Mexico, New Zealand, and South Africa respectively.

The group draws were held on the 21st of March to divide the qualified teams into four groups with the same number of teams in each group. The top two teams from each group will qualify to the knockout stage. 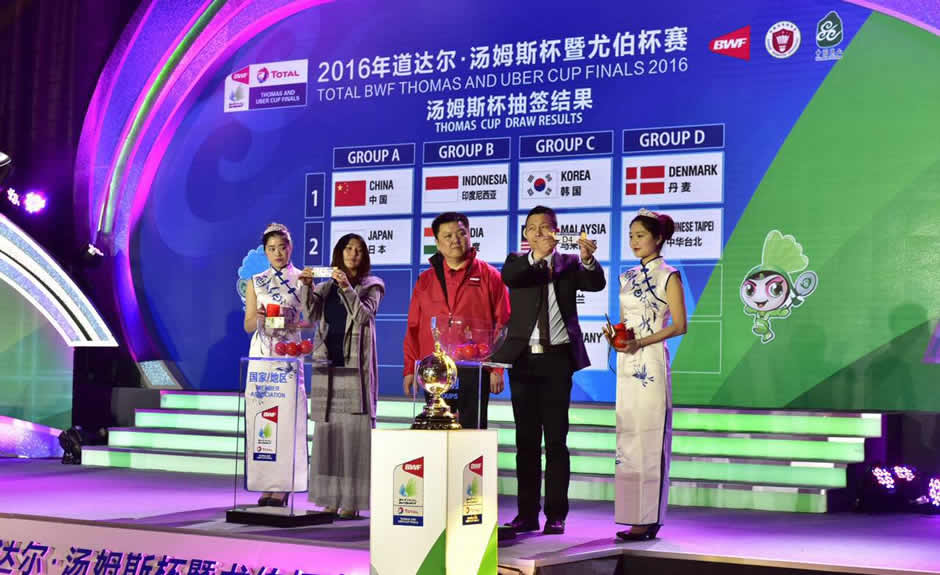 From the 15th of May to the 18th of May, the group stage fixtures will be played with eight matches every day involving all 16 teams. In Group A, the match between China and Japan is expected to be a fierce fight as both teams would like to establish their supremacy as early as possible. Meanwhile, Indonesia looks to qualify into the knockout stage from Group B with ease. The match between Malaysia and Korea is one to keep an eye on in Group C. And in Group D, Denmark looks like a lock to take a spot in the next round.

Although not the champion of the last Thomas Cup, China is favoured to win this year’s competition while the odds place Germany and France to be the least favourites of winning the trophy as published by UK online bookie bet365. But with the triumph of Leicester City in the English Premier League this year, it is safe to say that anything is possible so a little money on the long shots may be worth it in the end. 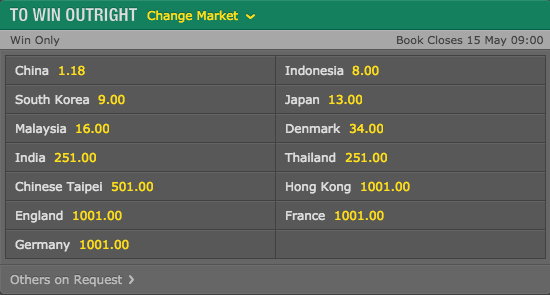 With the top players on both the men’s & women’s side facing off in Dubai, who’ll smash their way to glory? Bookie SBOBET highlights the front-runners!

Sportsbook bet365 highlights who’s set to cruise to victory during the opening rounds of the 2016 BWF Super Series Masters Finals!

Who's slated to conquer the Yonex-Sunrise 2015 Hong Kong Open? Online bookie bet365 is covering all the badminton singles, doubles & mixed doubles action.
【Betsson】Who’s Destined for Rio? The Volleyball Courts of Puerto Rico & Japan Will Decide All!
【188BET】Who Will Be the New King of Asian Soccer? AFC Champions League Knockout Round Action Kicks Off!
Home
Badminton