The NASCAR racing season has ground through 26 races and now it is time for the ten-race series for The Chase. Or, it used to be for The Chase. Now the season-ending competition is called the NASCAR Cup Series playoffs. The name change did not come without a new set of rules for handicappers to learn as well.

Briefly, this is how the playoff series will work. Sixteen drivers begin the first race, the Tales of the Turtles 400 at Chicago Speedway this weekend with a chance to win the championship. They are seeded by the number of points accumulated during the regular season of racing. Any driver winning a 2017 event automatically became eligible for the championship as long as he or she finished in the top 30 of the overall season standings. Thirteen drivers made the playoffs that way. The final three slots were filled according to season points, which were also handed out for performance during races this year for the first time. Those three were Matt Kenseth, Chase Elliott, and Jamie McMurray. With the field of 16 assembled, the next nine races will be run in rounds of three. After each round, three drivers will be eliminated. The winner of one of the three races will move on, along with the highest point score among the non-winners. After three rounds of eliminations only four drivers will be remaining and all points are thrown out and the last race in Homestead-Miami is winner take all (actually top finisher among the final four since all races will have full fields and it is possible to become champion without ever actually winning a race in the playoff series). 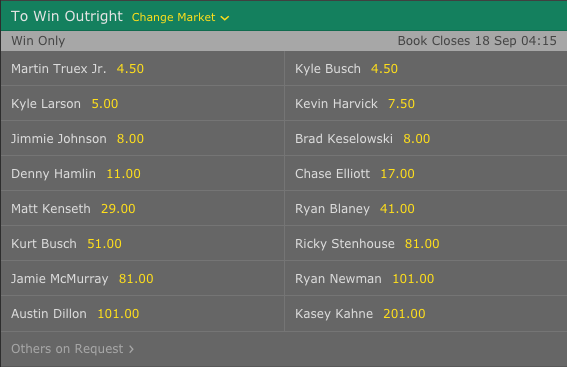 With that in mind, job one for punters is to identify the four drivers with the best chance to make it to the last race. The purpose of the new rules was to reward season long excellence and could be known as the Martin Truex rules. Truex, after a mostly undistinguished career, broke out in 2016 with four wins. But none of those checkered flags came in the playoffs so he was bumped from the championship almost before his engine got warm.

Truex had another dominant racing season in 2017 with four outright wins and he led the circuit in stage wins, laps led, and top-10 finishes. The Furniture Row Racing star also won the seasons point standings by a comfortable margin which should enable the new rules to work the way they are supposed to and propel Martin Truex into the finals. Bookmaker bet365 has installed Truex as the co-favorite to actually the win the title when he gets there at 4.50, down from 8.50 to start the campaign. 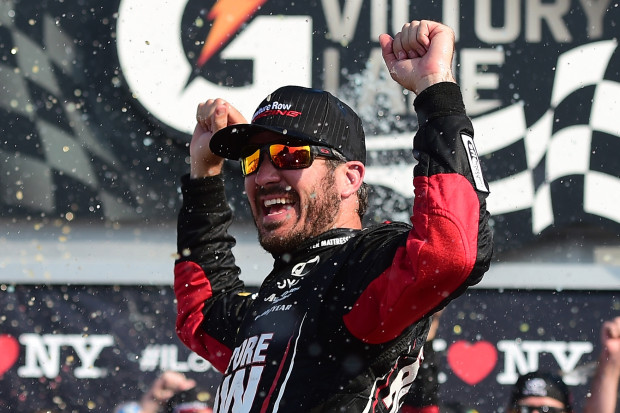 Co-favorite Kyle Busch was also a popular pre-season choice at 7.00. Early in the year Busch seemed to betray that confidence but his season came together in the second half when he picked up two checkered flags and a slew of high finishes. Busch ended the regular season as the third highest point scorer and has put himself in solid position to take home his second season championship in three years.

One driver who was not on most gamblers’ pre-season betting slips was Chip Ganassi Racing’s Kyle Larson. Only in his fourth year of driving, Larson was often not a factor on the big tracks but he won four times on intermediate tracks in 2017 and finished second to Truex in the point standings. Should the 25-year old Larson make it through to the final four expect him to be dangerous in the final race in Homestead-Miami. He guided his Chevrolet #42 to a second place finish in the year-ender there last year and won the Infinity Series race on the track in 2015. Larson will return backers 5.00 if he can polish off a dream season with a title. 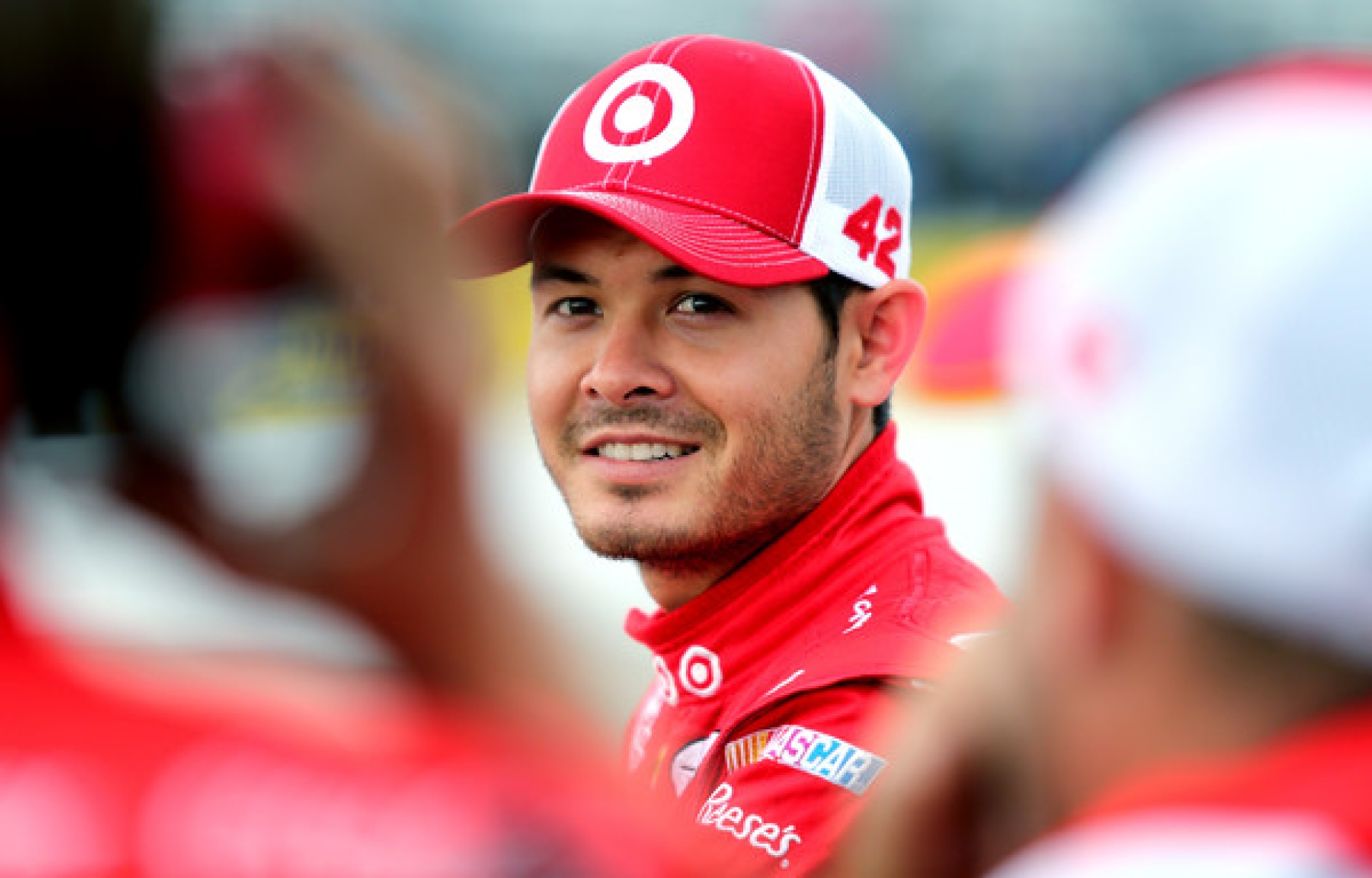 Seven-time champion Jimmie Johnson seemed to be cruising towards an eighth season title that would break a tie with legends Richard Petty and Dale Earnhardt when he won three times in the first 13 races. But the second half has not been so kind for the 83-race winner and Hendrick Motorsports. The best finish Johnson has been able to muster is an eighth place run at Richmond in the final race of the regular season. His final race log produced career lows in average finish, top-fives, top-tens, and laps led. Still, punters bet against the defending champion at their peril. He was 7.00 to win the title at the start of the year and 8.00 to still do so. By contrast Denny Hamlin of Joe Gibbs Racing has posted nine top-five finishes in his last 12 races including wins at Darlington and New Hampshire Motor Speedway. His Toyota #11 is as consistent a performer as they come but he may need to get a couple more checkered flags in the playoffs to get into the finals from his seventh position in the point standings. Hamlin is offered at 11.00. Two former champions are lurking in their Fords for a chance to get back on top. Kevin Harvick, the 2014 champion from Stewart-Haas Racing, is at 7.50 and Brad Keselowski, the 2012 champion from Team Penske, is at 8.00. Harvick had two playoff wins last year and Keselowski finished in the top-two six times in 2017. For long shot players there is 39-year old Kurt Busch. Busch won his only championship back in 2004 and has seldom been a factor in recent years. After a surprise win in the Daytona 500 to start the season, Busch seemed to take off most of the rest of 2017. But he pushed his Stewart-Haas Racing Ford to fifth-, third-, and fourth-place finishes in the last three regular season races. If he can steal a couple of playoff series wins and sneak into the finals in Homestead-Miami, backers will be holding tickets at 51.00 on him to win the title. 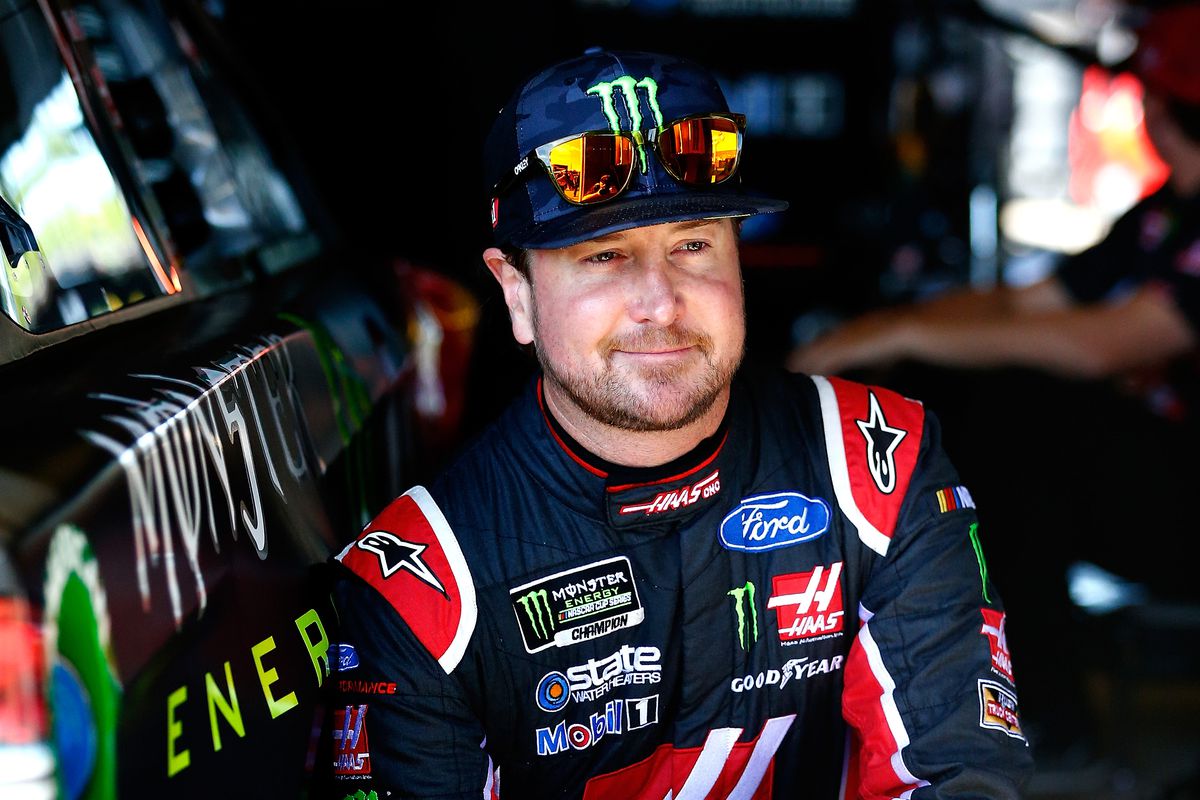 【Marathonbet】The Chase for the Sprint Cup Heads Down the Final Stretch! Who’s Favored to Take the Crown?

Bookmaker Bovada unveils the odds for NASCAR in 2017. Can Jimmie Johnson defend his title?

【NetBet】The Chase for the Sprint Cup Begins! Can Busch Make It Two in a Row? The Odds Say…

Bookie NetBet unveils the odds for NASCAR in 2016 including which driver has the inside track to be crowned the Sprint Cup champion.
Podcast Episode #22: The Middleweight Supremacy Bout – Canelo Álvarez vs. Gennady Golovkin
Podcast Episode #23: A Real Slump? Madrid Looks to Get Back on the Winning Track in La Liga!
Home
NASCAR