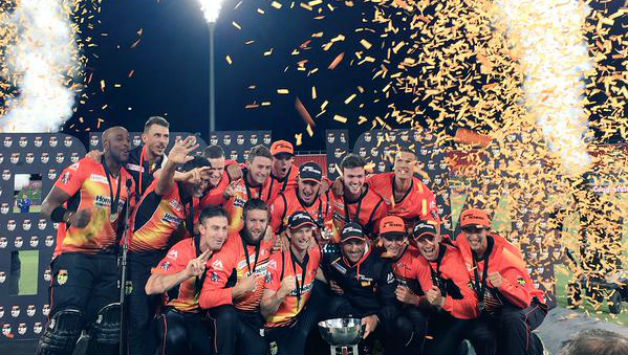 The 2015/16 Big Bash series will be the fifth time the tournament has been played since it’s establishment in 2011. The Big Bash series is the biggest Twenty20 cricket tournament in Australia and one of the most popular in the world. Essentially, each team has 20 overs with which to score as many runs as possible and the team which finishes with the highest total after both have batted, wins the match.

There are a total of 8 teams in the tournament, which are all placed in to the same group. Each team will play 8 matches within the group, 4 at home and 4 away from home. After the completion of the group, the top 4 teams will progress to play in the semi-finals, which is played as a one-off, knockout match. The two winners progress to the final, where the overall tournament winner will be crowned. The 8 teams taking part in the 2015/16 Big Bash tournament are Adelaide Strikers, Brisbane Heat, Hobart Hurricanes, Melbourne Renegades, Melbourne Stars, Perth Scorchers, Sydney Sixers and Sydney Thunder.

As it stands, there are only 3 teams that have previously won the tournament and they are the Sydney Sixers, Brisbane Heat and Perth Scorchers. The defending champions are the Perth Scorchers, who have won the last two Big Bash league events. In fact, only 4 different teams have ever made the final with the Hobart Hurricanes being the 4th team and only team yet to triumph. To date, the Perth Scorchers have reached the final of every tournament, losing their first two appearances but winning in both of their most recent finals. Last season, the final went down to a dramatic final over featuring the legendary Australian fast bowler, Brett Lee.

Last season, the Perth Scorchers showed you do not have to come out on top of the group stage to be able to win the tournament. A place in the top four is enough for a team to progress to the semi-finals and as defending champions, Perth will expect to finish comfortably as a top four team once again this year. However, despite having a strong looking squad on paper, including the likes of Adam Vogues, Mitch Marsh, Shaun Marsh and Nathan Counter-Nile, the lack of game time preparation from these players may prove to be costly. A number of the Perth Scorchers squad are involved with the national team and duties for their country could weaken the strength of the Perth Scorchers squad during the tournament. In terms of international talent, the Scorchers will once again call upon Michael Carberry with the addition of another Englishman, David Willey. Even with national duties causing problems, Perth’s home advantage should help to push them in to the semi-finals and they are 4/1 with bookie Unibet to win the Big Bash League for the third season in a row. 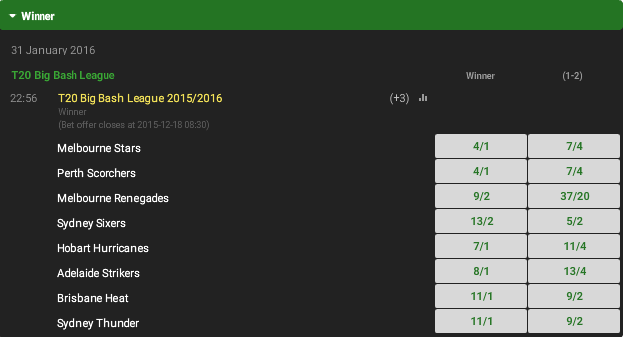 So which teams can mount a serious challenge to the Perth Scorchers in the 2015/16 Big Bash League? The Melbourne Stars, for one, have often been installed as the favourites for the tournament in the past but never really delivered the goods when it’s mattered the most. Last season, they made the semi-finals by finishing third but that’s where their tournament ended as they were bowled out for 126 runs by the Perth Scorchers. The squad this season looks very strong in the batting department with the likes of Kevin Pietersen, Luke Wright, Peter Handscomb, Rob Quiney and captain David Hussey in the squad. The Melbourne Stars also boast two excellent all-rounders in Glenn Maxwell and James Faulkner. The bowling attack may not be as strong as other contenders but at 4/1 with sportsbook Unibet to win the tournament, Melbourne is expected to at least make the semi-finals once more. 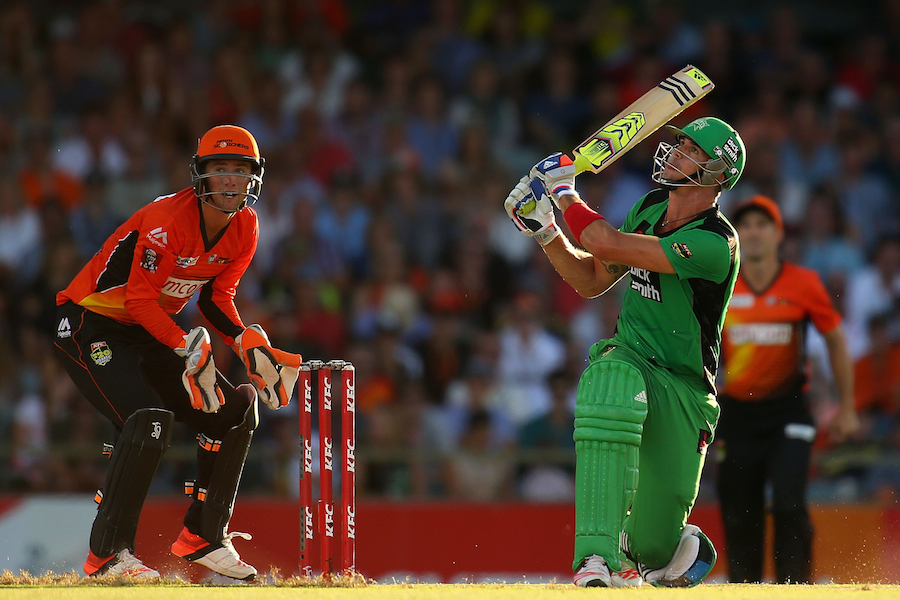 Staying in Melbourne, one team has made a number of changes to their squad following a disappointing sixth place finish last season and that is none other than the Melbourne Renegades. Despite losing some quality international talent this season, the Renegades have brought in West Indies batsman Chris Gayle. If the Jamaican can get in to his stride, he is capable of winning games on his own. However, Gayle will have to step up his performance level from previous Big Bash League displays, if that is to be the case. With the likes of Callum Ferguson, Tom Cooper and Dwayne Bravo to bat this season, the Renegades could cause some serious damage when at the crease. However, their bowling attack looks weak, especially with injuries and international involvement, and it’s that which could let them down. The 9/2 odds on them to win the 2015/16 Big Bash League seems a little short. Nonetheless, their batsmen will have to be at their very best for them to make the final.

Looking further down the odds, one team worth looking out for this season is the Hobart Hurricanes. Having finished as runners-up in 2013/14 and semi-finalists in 2011/12, the Hurricanes have the experience of making it to the latter stages of the tournament. They just missed out on the semi-finals by finishing fifth in the group last season but they have strengthened significantly this time around. Talented West Indies all-rounder Darren Sammy will provide both quality and entertainment in equal measure but it’s the addition of Sri Lankan Kumar Sangakkara, which is the real stand-out signing. Easily one of the best batsmen in the world, Sangakkara will join Dan Christian, George Bailey and Tim Paine in what looks a formidable batting line-up. One of the great things about signing Sammy and Sangakkara is that both players are available for the entire tournament. With top international talent missing games for other teams throughout the course of the Big Bash League, Sammy and Sangakkara could prove vital in the Hurricanes progress this season. At 7/1 with Unibet to win the 2015/16 Big Bash, it’s worth keeping an eye on the Hobart Hurricanes. 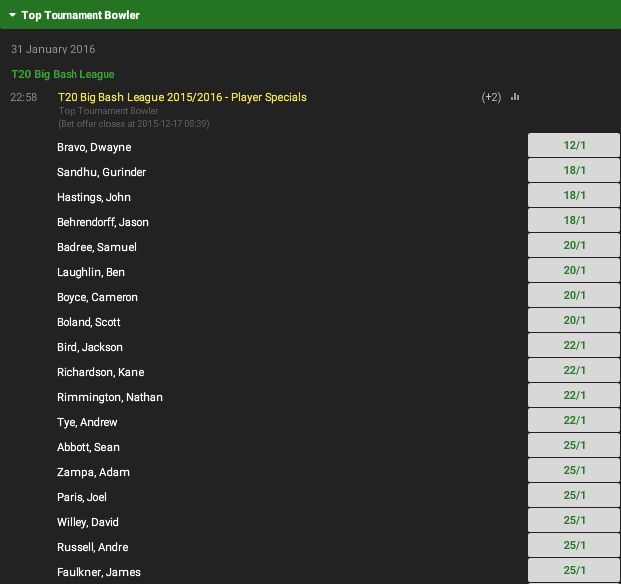 Other teams to look out for in the 2015/16 Big Bash League include the Adelaide Strikers, who having won the group stage last season appear tempting at 8/1 to win the tournament this season. Unfortunately for the Strikers, they have lost Kieron Pollard, who was a key player in their progress to the semi-finals last year. It will be interesting to see how his replacement, Mahela Jayawardene, fares in his first taste of the Big Bash League. The Sydney Sixers, available at 13/2 with Unibet to win the tournament, is another team that may suffer at the hand of international call-ups. The likes of Steve Smith, Nathan Lyon and Mitch Starc are unlikely to be available and that will come as a big blow to their chances of winning.

Twenty20 cricket always produces some exciting individual performances and it’s little surprise to see Chris Gayle at 10/1 with Unibet as the favourite to finish as top batsman. Kevin Pietersen is also on offer at the same price but possibly the pick of the betting is Kumar Sangakkara at 14/1. As mentioned above, Sangakkara will be devoting all of his time to the Big Bash and has only just retired from international cricket. The Sri Lankan will certainly be one to watch.

In terms of bowling, Twenty20 cricket can be a very unpredictable format for players. Having finished as the top bowler last season, John Hastings of the Melbourne Stars is rightly considered one of the favourites by Unibet at 18/1. Also finishing near the top of the bowling records in the previous two seasons has been Jason Behrendorff of the Perth Scorchers. With Perth expected to do well again this season, Behrendorff is sure to be a key player and can also be backed at 18/1 with Unibet to finish the 2015/16 Big Bash as leading bowler. 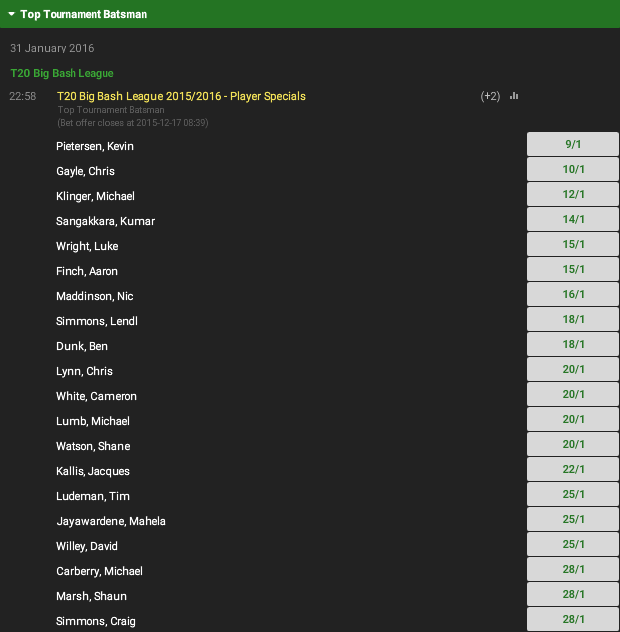 With Twenty20 cricket being the shortest form of the game, it can be difficult to predict an outcome at times. However, the Perth Scorchers have shown great consistency over the years to reach all four finals to date. Therefore, they can not be ignored at 4/1 with Unibet to win the tournament but for a bit more value, Hobart Hurricanes, at 7/1, are worth backing here for this campaign. Excellent recruitment leading up to the tournament has left the Hobart Hurricanes with a quality, consistent looking squad, who are capable of going all the way and winning the 2015/16 Big Bash League. 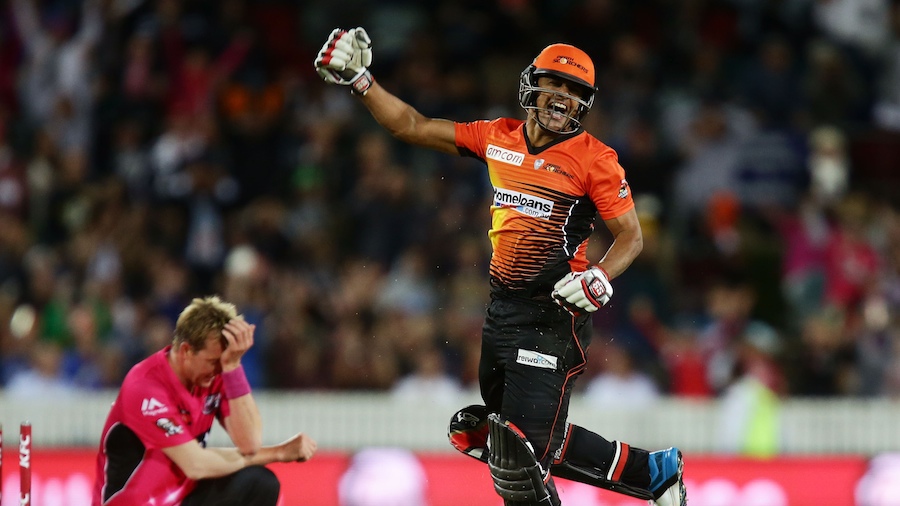 Sportsbook Marathonbet has got you covered for the 2017 edition of the Ashes. Which team is favored to win it all?

Who’s favorited to take home the Nissan T20 World Cup trophy? British bookie bet365 reveals all including batsman & bowler odds!
【bet365】Who will Ascend to the Football Summit in the Land of the Rising Sun? FIFA’s Club World Cup Commences!
【Bookmaker】Tide & Spartans, Sooners & Tigers: Who Will Be the Last One Standing?
Home
Cricket