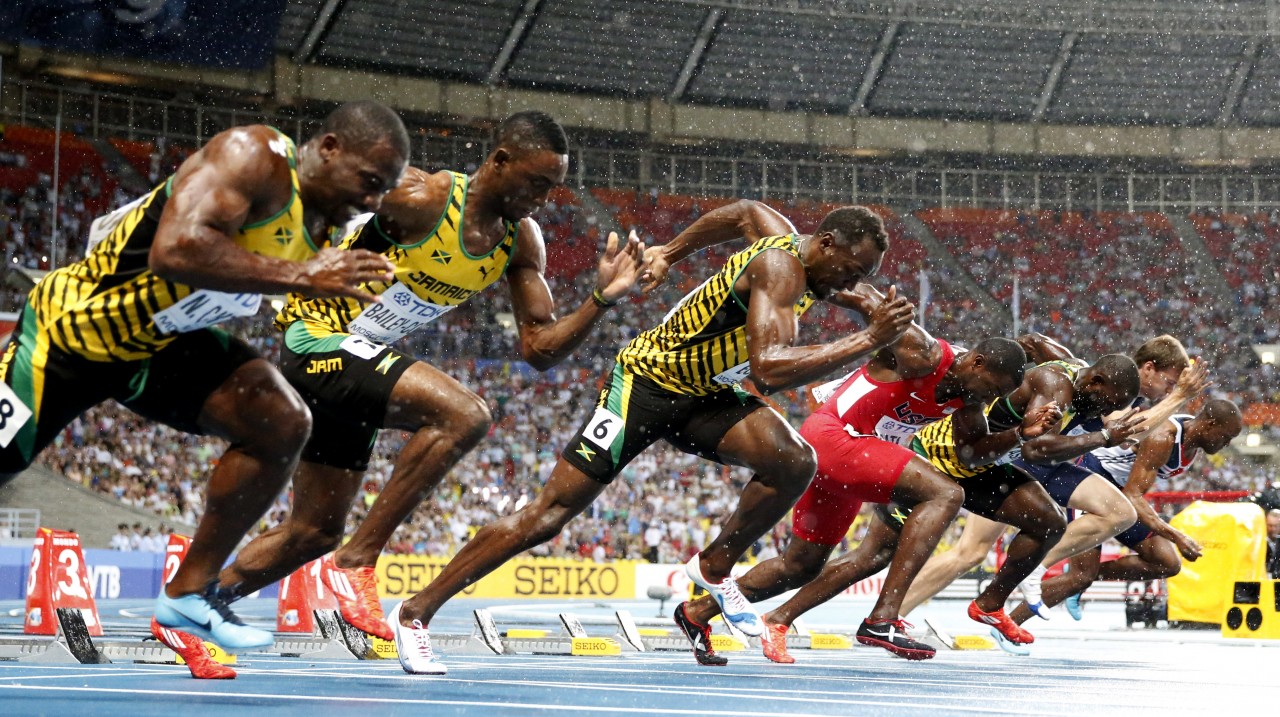 The 2015 IAAF World Athletics Championships will be held in Beijing, at the iconic Bird’s Nest Stadium. The event will be held between the dates of August 22nd and August 30th, and it’s the 15th time that the World Athletics Championships are being staged. It’s the first time the event has been held in China and the fourth time it’s been staged in Asia, with Korea and Japan (twice) being the previous host countries.

Over the course of the World Athletics Championships, there are a total of 23 events, which will be contested in both the men’s and women’s section. The only differences are the Decathlon and the Heptathlon, which are in the men’s and women’s respectively and the men have one additional event, which is the 50km walk. The majority of events, will be contested inside the Birds Nest Stadium, which will have a capacity of 54,000 for the championships, with the option of additional seating in the top tier of the stadium, if required. 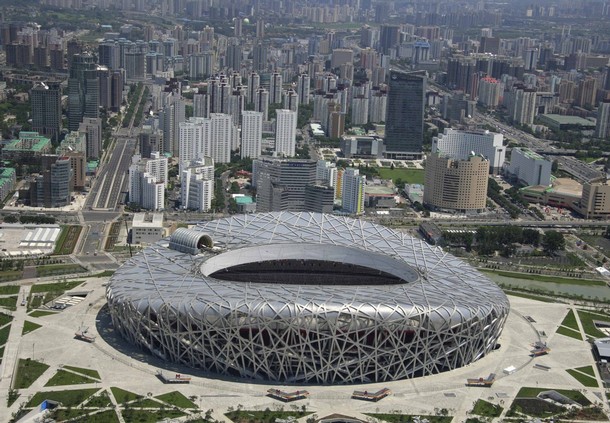 As per usual in the World Athletics Championships, the sports contested are split in to two different categories, one being track and the other field. Track events are all races, which differ in distance, with the majority being contested by individuals and two being contested in teams of four. The field events include the throwing, jumping and vaulting categories and in addition to this, there are the decathlon and heptathlon, which are a mix of the two.

Each athlete taking part, represents their country and as it stands, USA have been the dominant force at the World Championships, leading with a total of 301 medals since the championships began, back in 1983. The closest rivals to USA are Russia but they sit way back on a total of 166, which really highlights the dominance of the American athletes. However, in terms of gold medals, it was Russia who came out on top recently, winning a total of 7 to the USA’s 6 in the 2013 event. 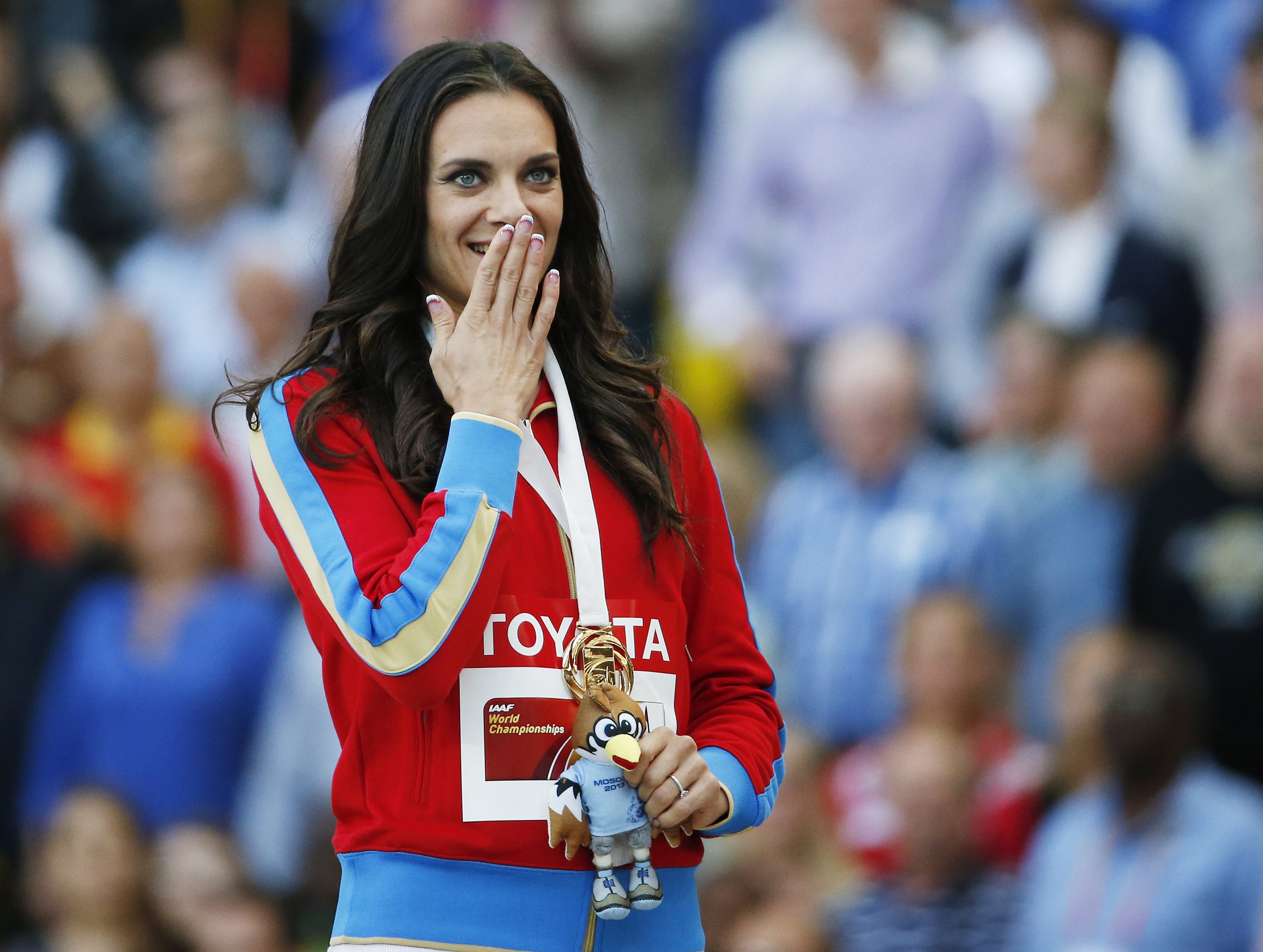 There’s one man that every sports fan likes to watch and that’s Usain Bolt. The Jamaican is the defending men’s 100 meter and 200 meter champion and despite struggling with injury during 2014, is still the best male sprinter in the world when healthy.

Seemingly unbeatable for many years, Bolt’s main competition will come from Tyson Gay, Asafa Powell and Justin Gatlin. As two sprinters, with controversial pasts, Gay and Gatlin have performed well recently and will be looking to capitalize if Bolt is less than 100%. However, at 4/5 with bet365 to win the men’s 100 meters, Bolt has to be favorite and looks fit coming in to the championships. The same applies for the men’s 200 meters, where if Bolt really wants it and turns it on, there is not much the other participants can do to stay with him. 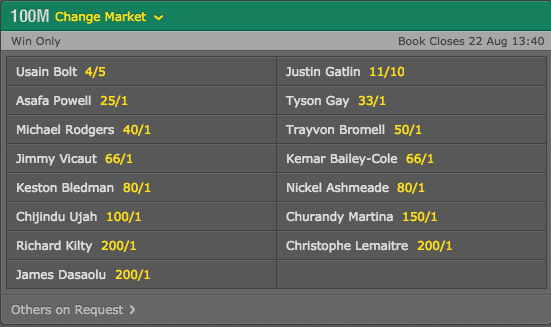 Turning the focus to the women’s sprint events and it’s another Jamaican star, Shelly-Ann Fraser-Pryce who comes in to the championships as the favorite to defend both her 100 meters and 200 meters gold medal’s from the 2013 championships. In terms of the 100 meters, there can be little doubt Fraser-Pryce, who is 4/9 with bet365, will take the gold but in the 200 meters, great competition from Candyce McGrone, Dafne Schippers and fellow Jamaican Elaine Thompson, could see the gold go to a different athlete this year. 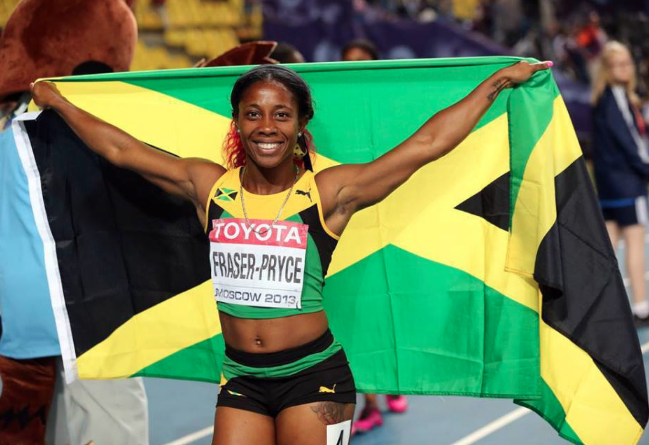 Elsewhere on the track, look out for the sensational Genzebe Dibaba, of Ethiopia. Having recently broke the world 1500 meter record and also set the fourth fastest 5000 meter time in history, Dibaba could be on for an historic 1500 meter/5000 meter winning double. At just 1/10 to win the 1500 meters with bet365, Dibaba is the clear favorite but the American duo of Jenny Simpson at 14/1 and Shannon Rowbury at 20/1 will be hoping to stop her.

The men’s long distance races of 5,000 meters and 10,000 meters could, once again, be dominated by Britain’s Mo Farah. In terms of rivals, Caleb Ndiki is lacking genuine fitness but could still be in contention for the 5,000 meter gold and both Paul Tanui and Geoffrey Kamworor of Kenya could really trouble Farah in the 10,000 meters. Even so, backing Dibaba and Farah is probably the safest bet here.

The men’s 800 meters could be a tight one to call, with Kenya’s David Rudisha, who is 11/4 with et365, claiming he is going to be back to his best come the World Championships. However, Nijel Amos of Botswana, the favorite at 7/4, has got the better of Rushida in their last six meetings and he, along with Amel Tuka of Bosnia, provide the biggest threat to Rushida’s attempt to claim back his world crown.

Moving on to the field events and Britain’s Mark Rutherford will be aiming to complete his set of Olympic, European, Commonwealth and world championship men’s long jump gold medals in Beijing. Despite not being in great form, Rutherford has to be considered the favorite but faces competition from Jeff Henderson and Marquis Dendy of the USA. The men’s triple jump is set to be a terrific battle between the in-form pair of Cuban Pedro Pichardo and American Christian Taylor. Both are capable of jumps over 18 meters. 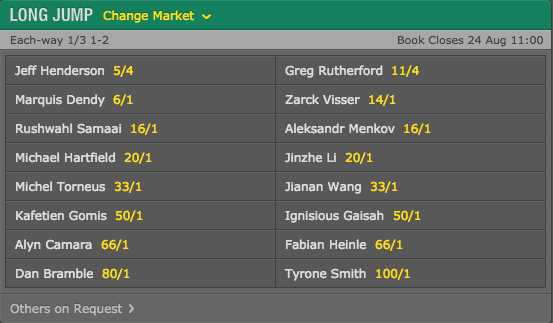 The women’s hammer is there for the taking for Poland’s Anita Wlodarczyk. Having won the event back in 2009, Wlodarczyk knows how to get the job done on the biggest stage and has recently set a world record distance. The home crowd will be hoping Wang Zheng and Zhang Wenxiu can get on the podium and have a good chance of doing so, even though the gold medal will probably be out of reach.

The closest contest in the field, could come from the men’s javelin, where the gold medal could realistically be won by five different athletes. Both Julius Yego and Keshorn Walcott have thrown over 90 meters this year and the defending champion, Vitezslav Vesely, is also in good form. Other contenders include Thomas Rohler and Tero Pitkamaki but Vesely remains the man to beat. 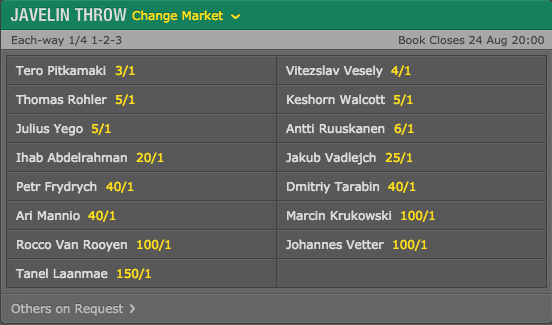 Both the men’s and women’s multi-discipline events have their favorites, with American Ashton Eaton leading the way in decathlon and Brianne Theisen-Eaton strongly fancied to take gold in the heptathlon. Trent Hardy and Damian Warner are likely silver and bronze medalists in the decathlon, with Jessica Ennis-Hill, Nadine Broersen, Katarina Johnson-Thompson and Carolin Schafer competing for the silver and bronze in the heptathlon.

Finally, we have the relay events and is there any bigger rivalry in the world of athletics than the USA vs. Jamaica in the men’s 4 x 100 meter relay? The competition between the two teams was really stoked up, when the US team defeated Jamaica at the world relays in the Bahamas earlier this year. It wasn’t only the victory but the throat slashing gesture made by Ryan Bailey at the end of the race that has fueled the flames. That might be all the motivation Jamaica needs to come out on top in Beijing.

Even with Jamaica winning the men’s 4 x 100 meter relay, there can be little doubt that come the end of 2015 IAAF World Athletics Championships, the United States will be sitting at the top of the medal table once more.

Will It Be the World’s Fastest Human’s Last Hurrah? Bolt & Co. Get Ready for London!

Bookie Coral showcases the odds covering the spectrum of events at the 2017 IAAF World Championships.
【Bookmaker】Can Spieth Snag Major #3 in 2015? The Oddsmakers Weigh-In on the Pairings at Whistling Straits!
【Coral】Is this the Year of the Serena Slam? Will Djoker Make it 3 out of 4? The US Open Odds are Out!
Home
Track & Field