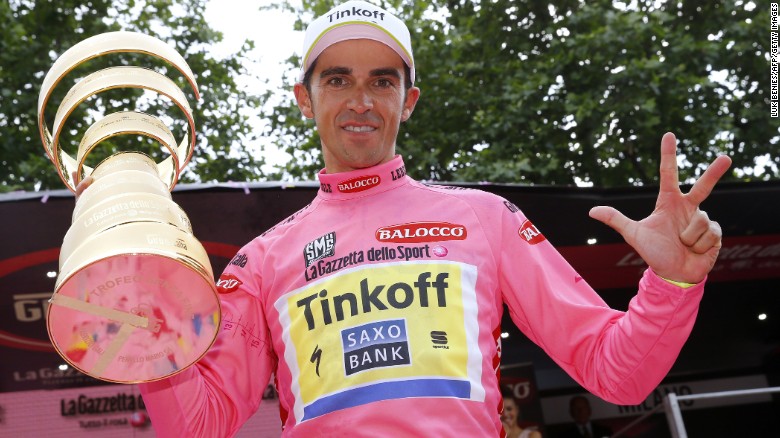 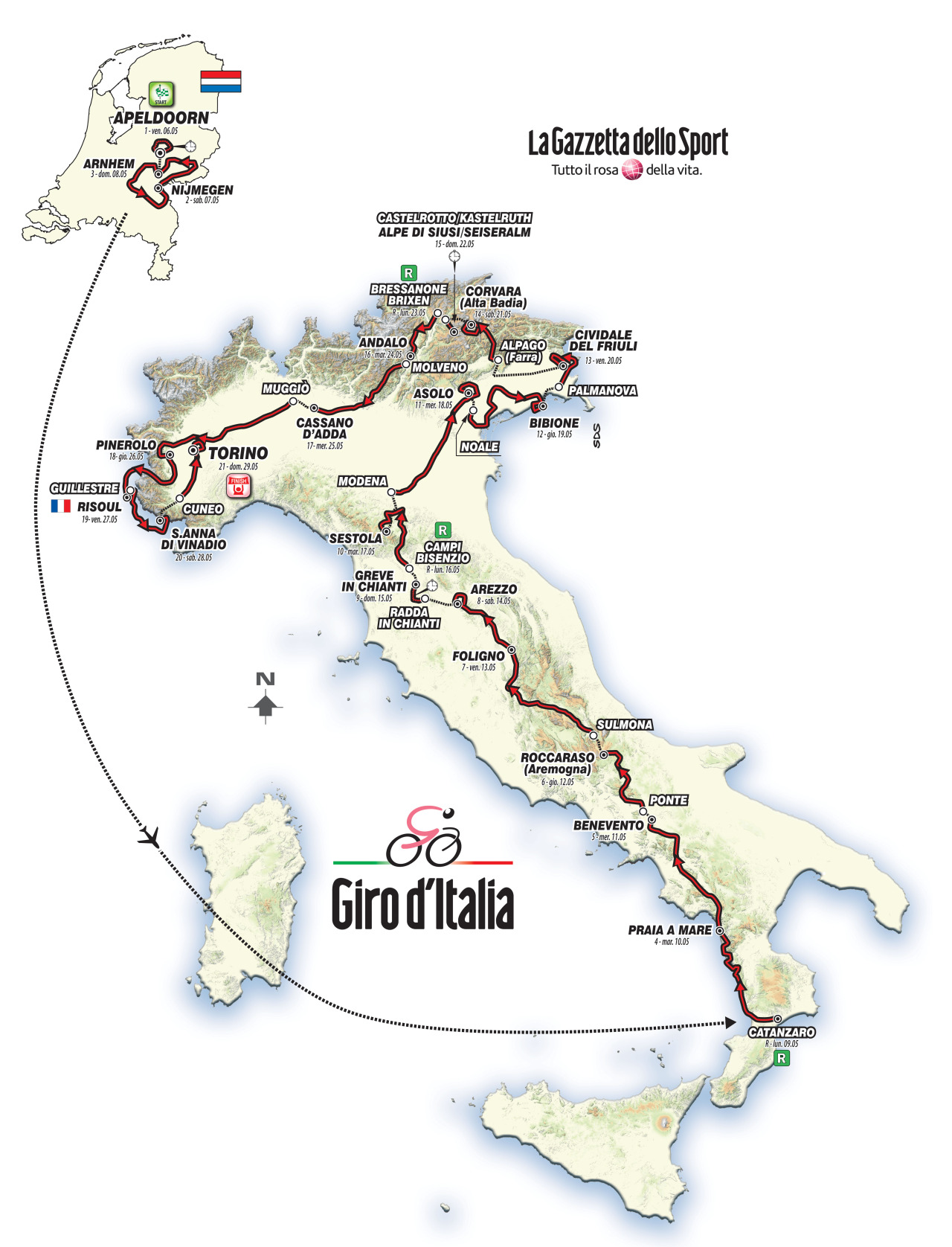 In total, there are three stages in the Netherlands, all of which come at the start of the race. There are also two stages in France and these come towards the latter stages of the 2016 Giro d’Italia. The remaining stages all take place in Italy.

During the course of the 2016 Giro d’Italia, there will be four different jerseys awarded. The general classification, which is calculated by adding the finishing times of each cyclist at the end of every stage, is what’s used to work out the final winner of the event. During the course of the race, the leader will wear the pink jersey. The 2015 Giro d’Italia was won by Spaniard, Alberto Contador of the Tinkoff-Saxo team, the second time he has won the race with the first being back in 2008. 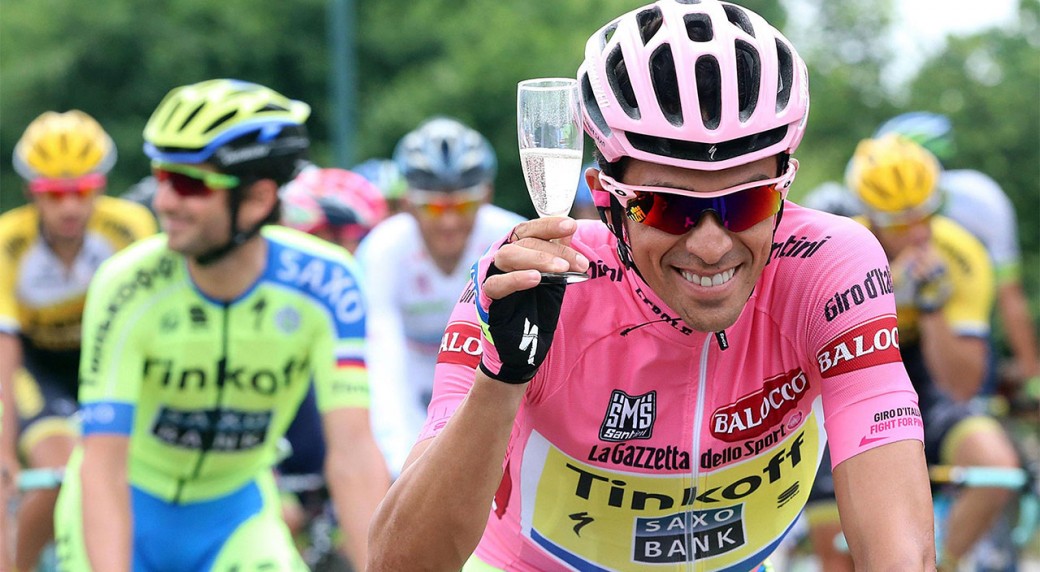 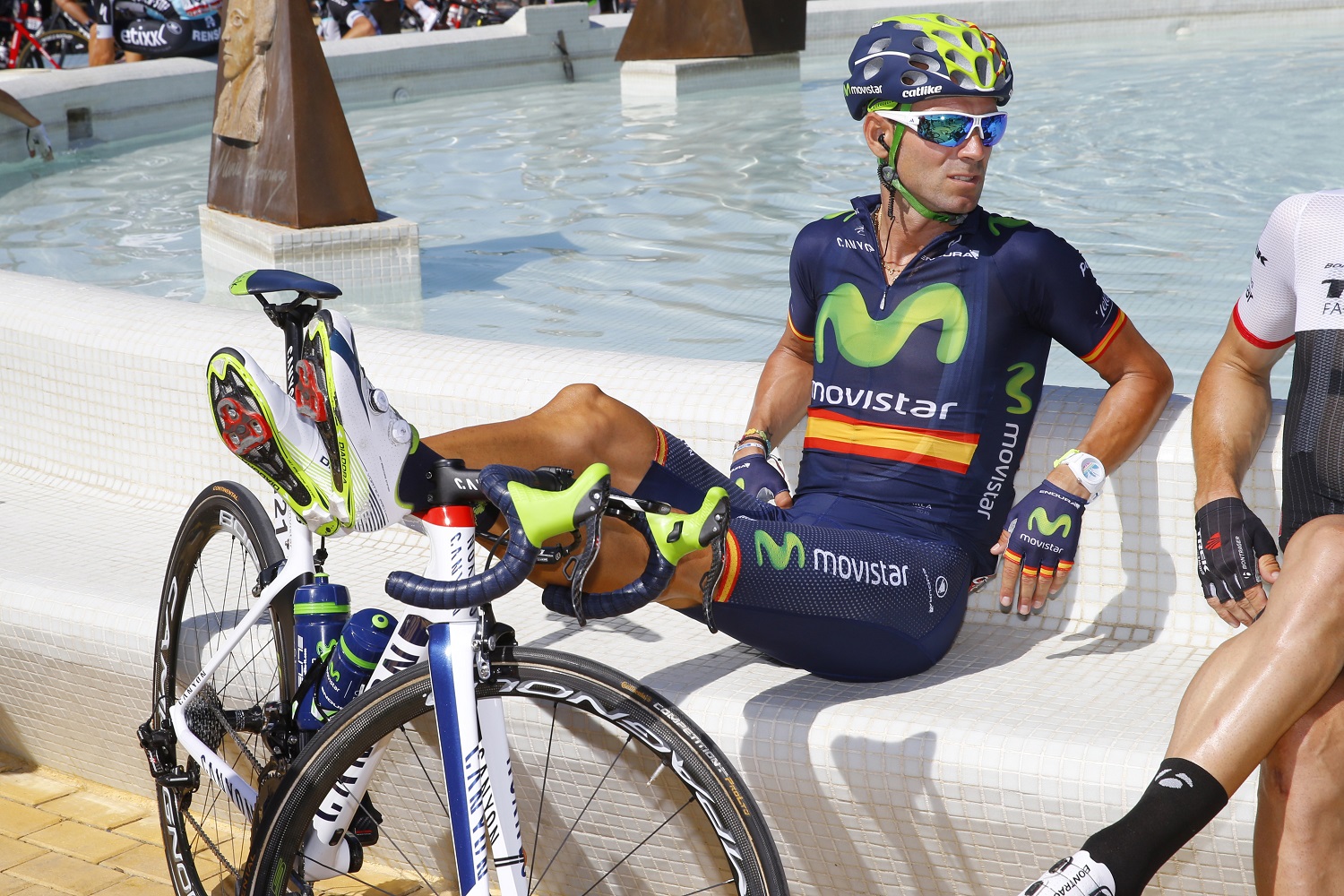 The defending champion, Alberto Contador will not be taking part in the Giro d’Italia this year and is instead concentrating his efforts on the Tour de France. Indeed, there are not as many big name riders entering as perhaps we have seen in recent years, so who can we expect to see competing for the pink jersey throughout the tour and finishing as winner of the 2016 Giro d’Italia?

There are three cyclists who have to be considered as the main contenders for the Maglia Rosa and they are Mikal Landa of Team Sky, who finished in third place in 2015, Vincenzo Nibali, who won the 2013 Giro d’Italia of Astana and Alejandro Valverde of Movistar, who is taking part in his first Giro d’Italia race.

Let’s start with Vincenzo Nibali, who has achieved a great deal of success in his career and will be looking to add the 2016 Giro d’Italia to his long list of accomplishments in cycling. However, form leading up to the race has not been great and following success in the Tour of Oman, the Italian has been quiet. He did not look in the kind of shape required to win this event when riding in Trentino a few weeks ago but has been taking part in altitude training in preparation of what’s to come. Furthermore, the course seems to suit him and with his ability to compete in all facets of the race plus perform in cold conditions, Nibali is sure to challenge for the 2016 Giro d’Italia crown and is 6/4 with bookmaker Unibet to win it. 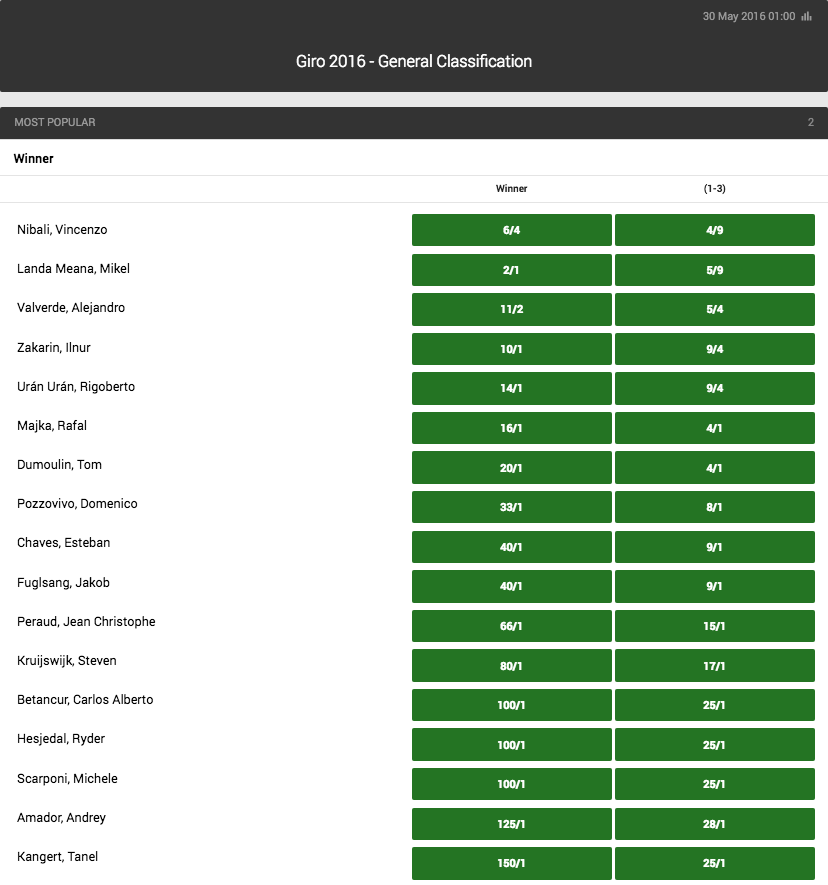 Alejandro Valverde will be participating in his first Giro d’Italia but will bring plenty of experience and success with him. The Spaniard finished third in the Tour de France last year, his highest placed finish for that event in his career. His only tour win to date came at the 2009 Vuelta a Espana but he does have a fantastic record in the classics. Perhaps not in brilliant form ahead of this race, Valverde has still enjoyed a successful period leading up to the 2016 Giro d’Italia including victories at the Vuelta Castilla y Leon and the Vuelta a Andalucia, plus more recently, the Fleche Wallone. Valverde is certainly good enough to feature but the mountain stages may be his downfall. If he can keep in contention during these then anything is possible and Valverde is available at 11/2 with Unibet to win the 2016 Giro d’Italia.

Last year Mikel Landa finished third in the Giro d’Italia but was not given the same chances as teammate Fabio Aru. That was with Astana but this year Landa is with Team Sky and will be their number one rider giving him every chance to succeed. Form has been good in the lead up to the race and the Spaniard won the overall and mountains jersey at Trentino in addition to a stage of the Basque Country. One concern will be Landa’s time trialling but the mountain time trial will suit him. At odds of 2/1 with sportsbook Unibet, Landa may be a little short in the betting to generate your full support. 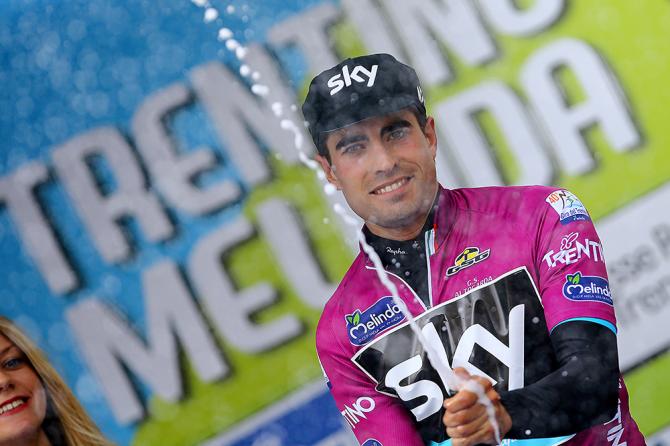 Outside of these three riders who else could come in to contention at the 2016 Giro d’Italia? Rafal Majka burst on to the scene in 2012 and also enjoyed a good year in 2014. The Pole won a stage of the Tour de France last year but questions remain as to whether he can make the step up and challenge at the Giro d’Italia. Durability over 3 weeks is questionable and the odds of 16/1 with Unibet reflect this. 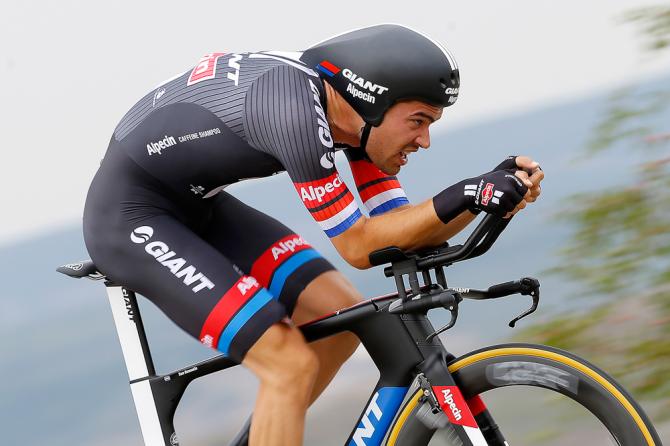 Tom Dumoulin could be the one rider who offers the best value. The Dutchman has worked his way in to contention for the 2016 Giro d’Italia thanks to some impressive performances last year. At the Vuelta a Espana, Dumoulin was very consistent only to lose out to Fabio Aru on the final mountain. His mountain climbing is what seems to let him down in comparison to the top three contenders but Dumoulin has been in excellent form this year and at 20/1 with online bookie Unibet, he could prove to be the best of the rest. If you think Dumoulin has what it takes to perform well but just fall short, he is 4/1 with Unibet to finish inside the top three. 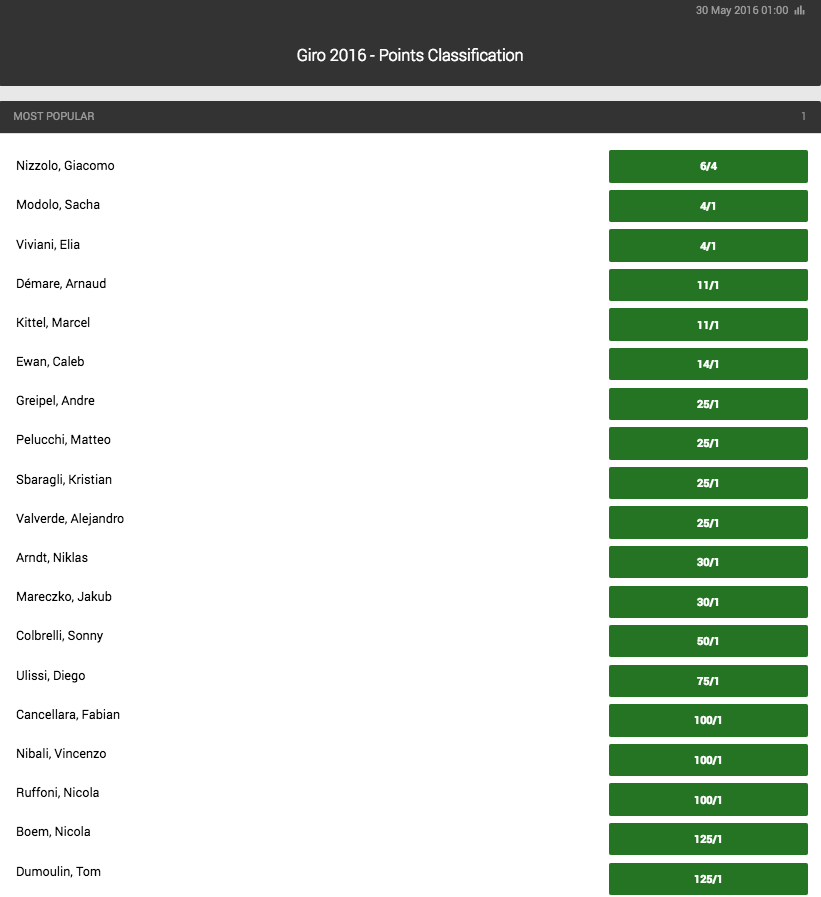 The 2016 Giro d’Italia has the potential to be an open race with a number of men coming in to contention to take the overall victory. However, Vincenzo Nibali has to be considered the favourite going in to the race at 6/4, especially with his experience, despite perhaps not showing his best form of late. If you are looking for a potential outsider, Tom Dumoulin looks a good bet at 20/1. 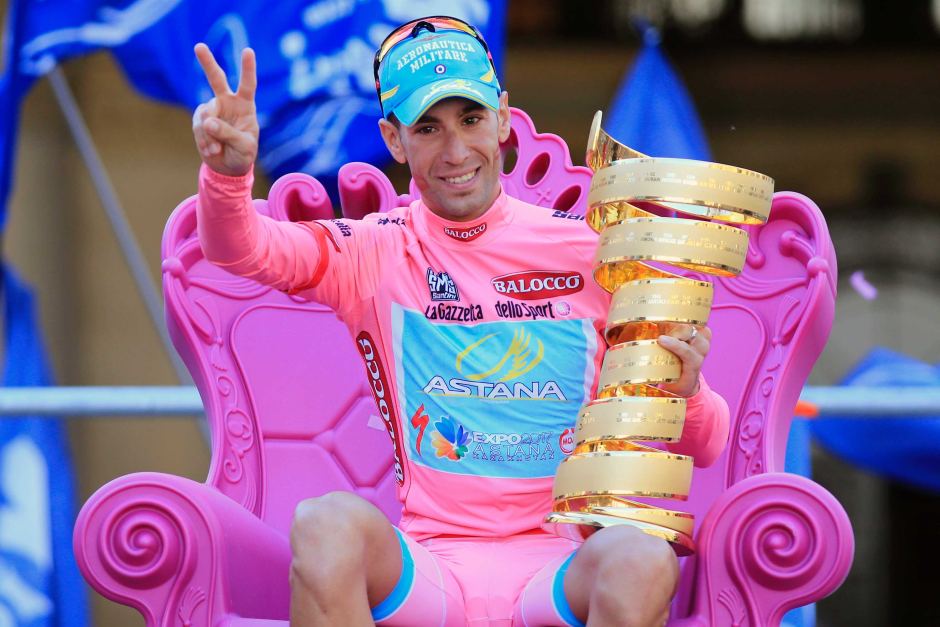 Bookie Betfred covers the favorites expected to challenge for this year’s Tour de France. Can Froome repeat as champ or will Quintana & Co. knock him off?
【M88】The Oddsmakers Have Spoken! Who’s Favored for the 2015-16 NBA Title?
【bet365】2016 Kentucky Derby: Who Will Claim Victory at Churchill Downs?
Home
Cycling