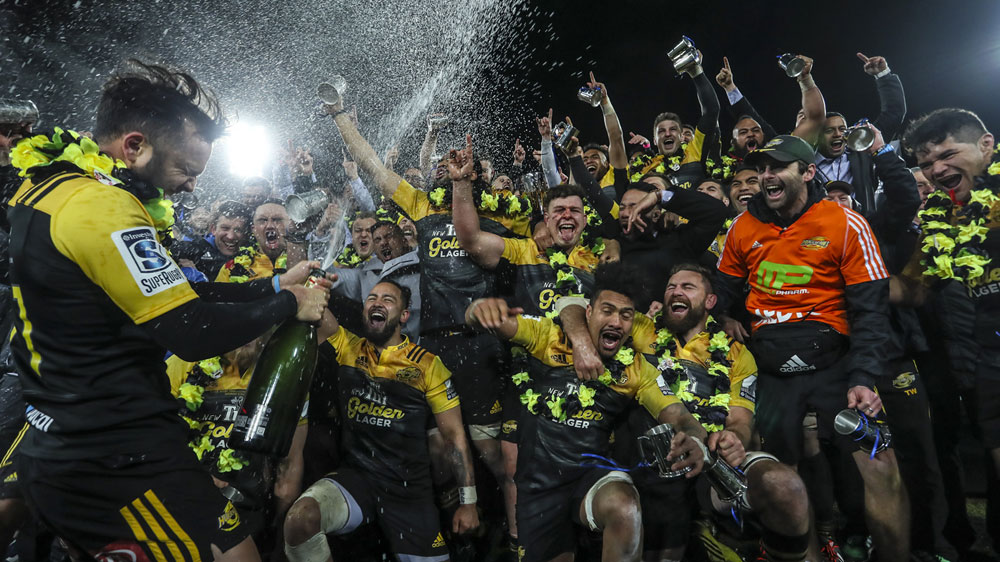 This season will see the 22nd playing of Super Rugby and its set to be the biggest and most exciting tournament to date. With the competition expanding last year to include 18 teams, the same format has been kept for Super Rugby 2017 and the tournament organised by SANZAAR will feature teams from Argentina, Australia, Japan, New Zealand, and South Africa. Will the teams from Argentina and Japan use the experience of last season to improve this time around?

The Australia and New Zealand conferences will remain the same as they were last season and the South African group has once again been split in to two conferences, each featuring four teams and including the teams from Argentina and Japan. Each team will play a total of 15 matches over 17 rounds with rounds 15 and 16 split to accommodate for the Lions tour of New Zealand. Each team will have two rest rounds and the winners of each conference will host a quarter-final match with their opponent being the next three highest placed teams from the Australasian group and the highest placed team in the South African group.

Super Rugby is a long, grueling season with a lot of traveling and one which tests players to the limit.

The Hurricanes were extremely impressive last season having topped their conference before going through the playoffs without conceding a single try. 888sport has the Hurricanes priced at 7/2 favourites to become the first team since the Chiefs in 2012/13 to win back-to-back Super Rugby titles. Other than Victor Vito and the injured Vaea Fifita, who may be back within a month of the tournament starting, the Hurricanes have kept their top performers from last season including the superb Beauden Barrett. However, despite his individual brilliance, it was a fantastic team effort from the Hurricanes in 2016 and that team could easily return to claim a second successive Super Rugby win.

The New Zealand conference is going to be extremely tough this season and with the Lions tour taking place, it will be interesting to see how the teams cope. The Highlanders certainly have the talent and experience in their squad to make the playoffs again this season. Their squad from last year is still intact and they should enjoy a good run, at least to the semi-finals, entertaining fans along the way with their open brand of rugby. The Highlanders are evens to make the semi-final with online bookie Paddy Power and 11/2 to win the tournament with 888sport. 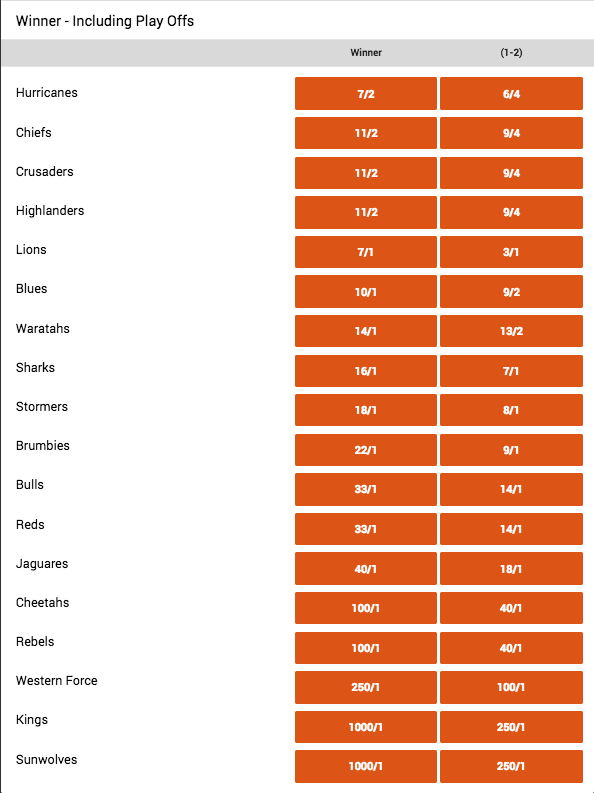 The Super Rugby all-time leading championship winners, the Crusaders, have not won the title since 2008 but that could change this season. They have several All blacks on their squad and if they can keep disruption down to a minimum during the Lions tour, their forwards have the power and talent to take them all the way to the final. The loss of Nemani Nandolo is a blow and the Crusaders must look elsewhere in their team for tries this year but with Israel Dagg in their ranks and eager to impress ahead of the Lions tests, the Crusaders could make a charge to the final in Super Rugby 2017. The Crusaders are 13/4 to win the New Zealand conference with 888sport and 11/4 to reach the final with PaddyPower. 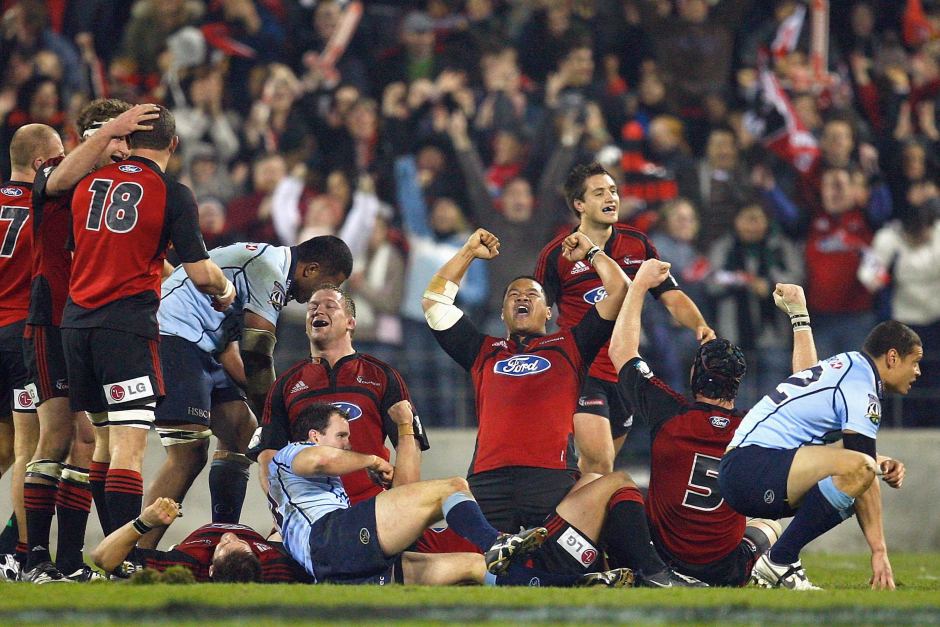 Looking at the Australian conference and the Waratahs are the one team who have a realistic chance of making the playoffs this season. It will not be easy but with their tremendous attacking threat, including the halfback duo of Nick Phipps and Bernard Foley and the scoring power of Israel Folau, the Waratahs could cause some serious damage in Super Rugby 2017. You can get evens for the Waratahs to top the Australian conference with bookmaker 888sport and 6/1 for them to make the final with Paddy Power. 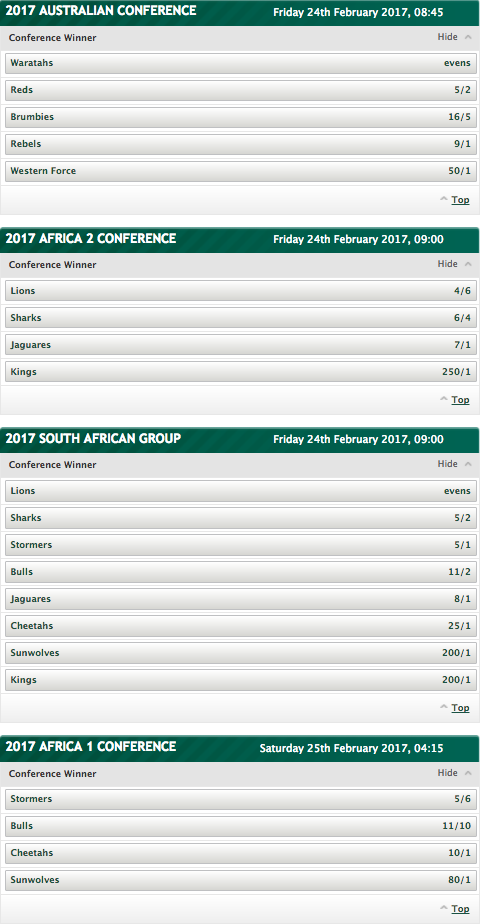 Heading to Africa and the Africa 1 conference looks to be the weaker of the two. The Sunwolves have very little chance of making it beyond this stage of the competition and it will probably come down to the Bulls to progress and challenge in the latter stages of the tournament. Captain, Handre Pollard is back from injury and with many Springboks available, including Adriaan Straaus, they have the strength in depth to do well this season. However, playing the New Zealand teams is going to be very difficult and could have a negative impact on their campaign. The Bulls have failed to make the playoffs in recent years, having last reached the final in 2010 but this could be about to change. The Bulls are 11/10 to win Africa 1 conference but their odds of 14/1 to reach the final sum up their overall chances in Super Rugby 2017.

Moving onto the Africa 2 conference and both the Sharks and Lions are expected to make the playoffs this season. Having reached the final last season, the Lions will be full of confidence and have the bonus of not playing any of the New Zealand teams during the conference stage of the tournament. If the Lions can replicate their stats from last season, they will go far again this year and should top this conference before going deeper in the competition.

The Lions are available at evens to top the conference and 3/1 to make their second final in succession. The other team to watch in this conference are the Sharks, who have a strong set of backs. Coupled with Jean-Luc Du Preez in tremendous form, they will challenge the Lions for top spot in the conference and can be backed at 7/4 with 888sport to finish in first place and progress to the playoffs. However, anything other than the quarter-final is a big ask for this group of players. 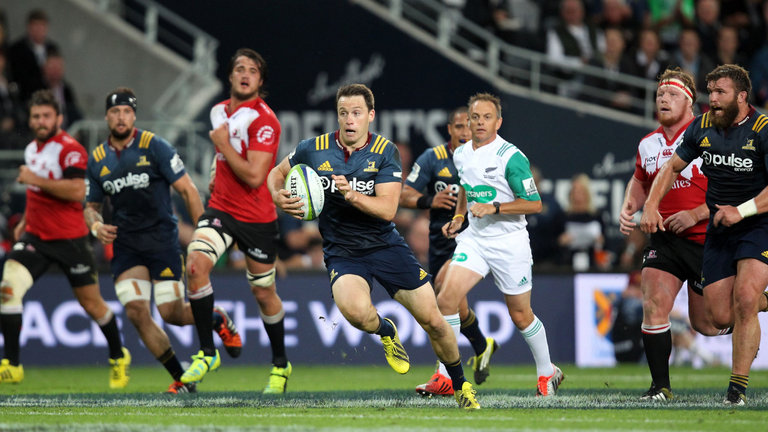 Looking at the individual honours and Beauden Barret finished as the top points scorer last season and with the Hurricanes tipped to go far again this season, he is available at 7/2 with sportsbook Paddy Power to again on top of the pile in terms of points. With the Crusaders being fancied by many to make a return to the final this season, Richie Mo’unga will be on kicking duty and should score plenty of points. At 7/1 with Paddy Power, Mo’unga makes a tempting bet to finish the 2017 Super Rugby season as top points scorer.

So, with the above information in mind, who could make the final of Super Rugby 2017 and lift the trophy? Both the Hurricanes and Highlanders should make the semi-final stage, which leaves two places up for grabs. The Waratahs have an outside chance of making the semi-finals but the Crusaders are also looking strong and could make three teams from New Zealand in the semi-finals. It’s little surprise therefore to see New Zealand at 13/25 with 888sport to be the nationality of the winner.

In fact, we could be in for a repeat of the 2015 Super Rugby final and you can get 9/1 for the Hurricanes and Highlanders to meet in the final this year. However, in terms of a winner, you just need to look at the Highlanders duo of Aaron and Ben Smith to see they have two of the best players in the world at their disposal, in key positions. It could be this that makes the difference and sees the Highlanders win their second Super Rugby title. You can back the Highlanders to win Super Rugby 2017 at 11/2 with 888sport.