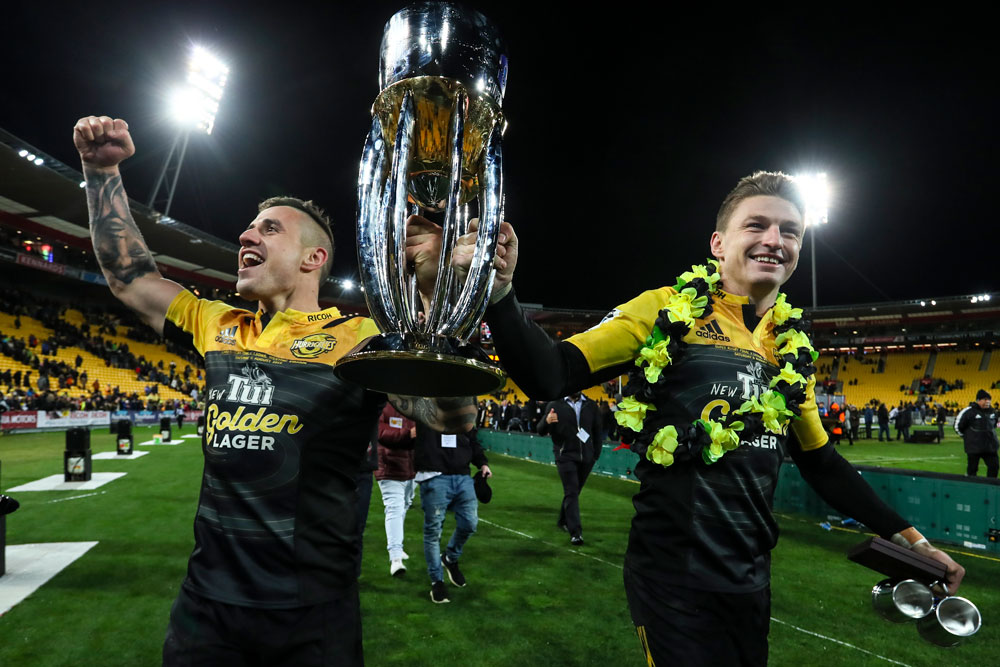 The 2017 Super Rugby season has reached the all-important finals stage of the tournament. With the league format complete, there are 8 teams remaining in the event who will each contest a qualifying match to make the semi-finals and final.

The qualifiers take place on the 21st and 22nd of July with the semi-finals on the 27th and 28th of July and the final on the 4th of August. Until the final two teams are confirmed, it is impossible to know where the final will take place as the highest ranked semi-final winner will get home-field advantage for the final.

Last season it was the Hurricanes, therefore the match was played at Westpac Stadium in Wellington. They went on to win the match 20-3 against the Lions and having made the qualifiers this season, they have a chance to successfully defend their trophy.

Eight teams have qualified for the qualifiers thanks to their position in the final table. The Lions were the most successful team finishing top of the overall standings on 65 points just one point clear of the Crusaders who were second. 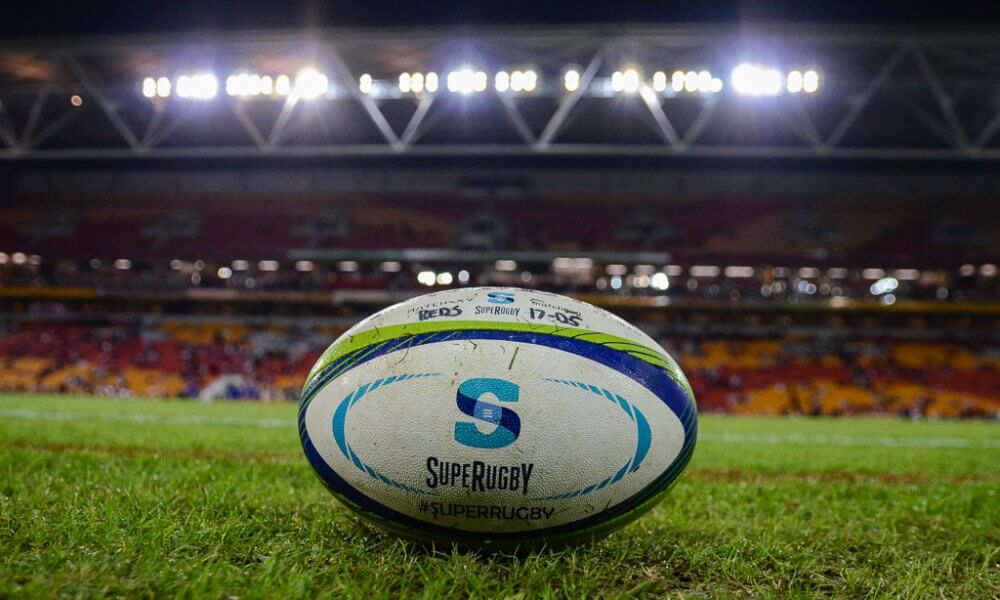 The advantage of finishing at the top of the table is a home match in the qualifiers against the lower placed team. Therefore, the Lions will meet the Sharks at home, the Crusaders will meet the Highlanders and so on but the first qualifying match to be played will be between the Brumbies and Hurricanes at GIO Stadium in Canberra. 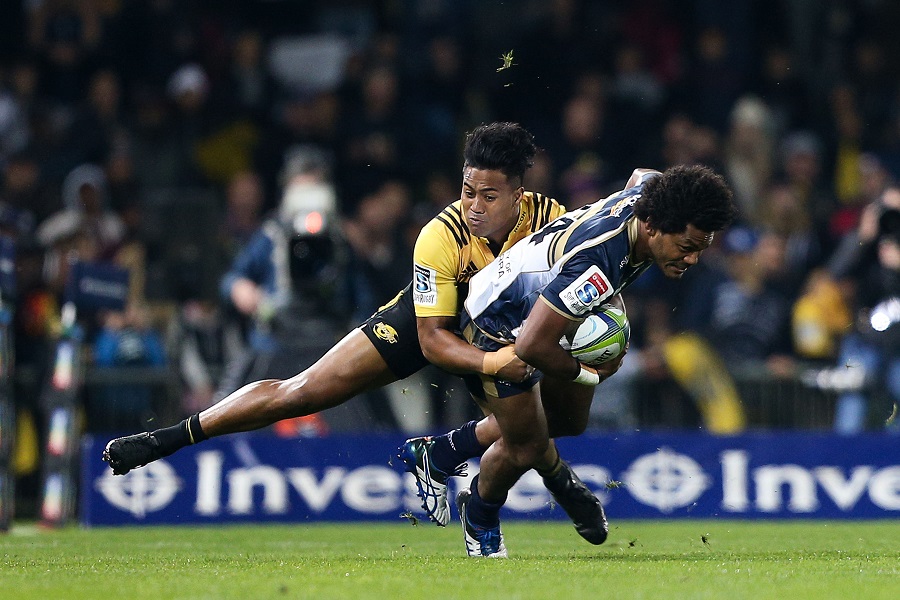 The Brumbies lost their final two matches of the regular season but their position at the top of their Australasian Conference was already secure. They made many changes to their team in the final fixture and despite losing, gave a good account of themselves. However, they still finished with less points than the Blues, who came in at the bottom of the New Zealand Conference.

Therefore, it’s little surprise to see the Hurricanes come into this match as the favourites with William Hill priced at 1/7 despite being the away team. Brumbies have lost all five of their matches against the New Zealand opposition this season including a 56-21 defeat to the Hurricanes in Round 9. 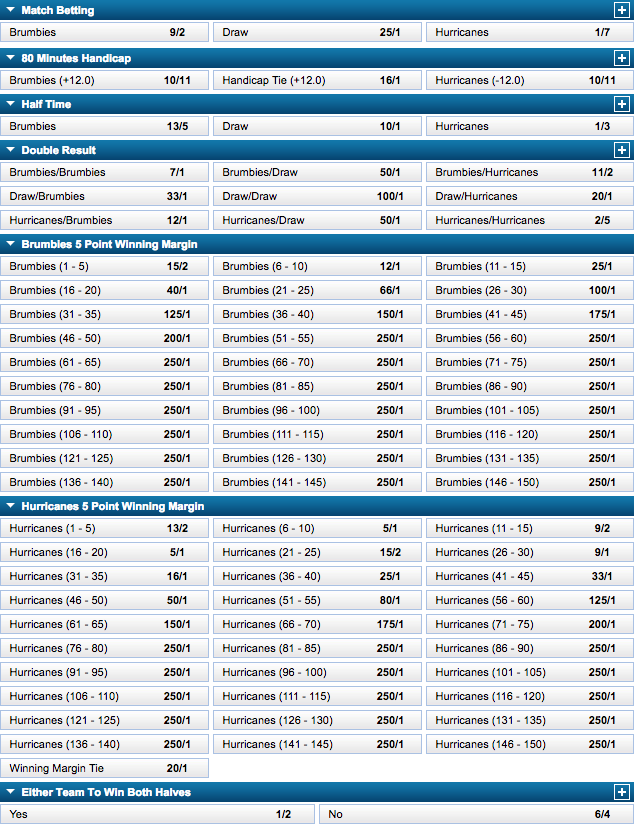 The second Super Rugby 2017 qualifying match to be played will be between the Crusaders and Highlanders at AMI Stadium in Christchurch.

The Crusaders won 100% of their games prior to the final round of regular season fixtures when they went down to the Hurricanes. The defeat could be damaging come the final as it saw them drop into second place in the overall table but first they must defeat the Highlanders. Having been involved in two tight matches against the Highlanders in the regular season this could be another close game. 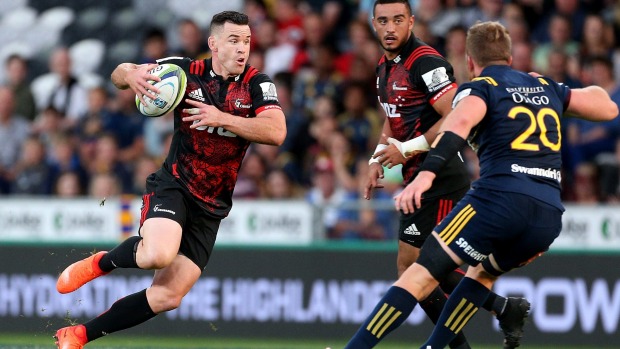 However, the Highlanders have lost four of their last six games against New Zealand opposition this season and the only team they have defeated is the Blues. This should be a very close match but the Crusaders have what it takes to prevail and can be backed at 2/5 to win. You can also get 5/1 for the Crusaders to win by a 1 to 5-point margin at William Hill. 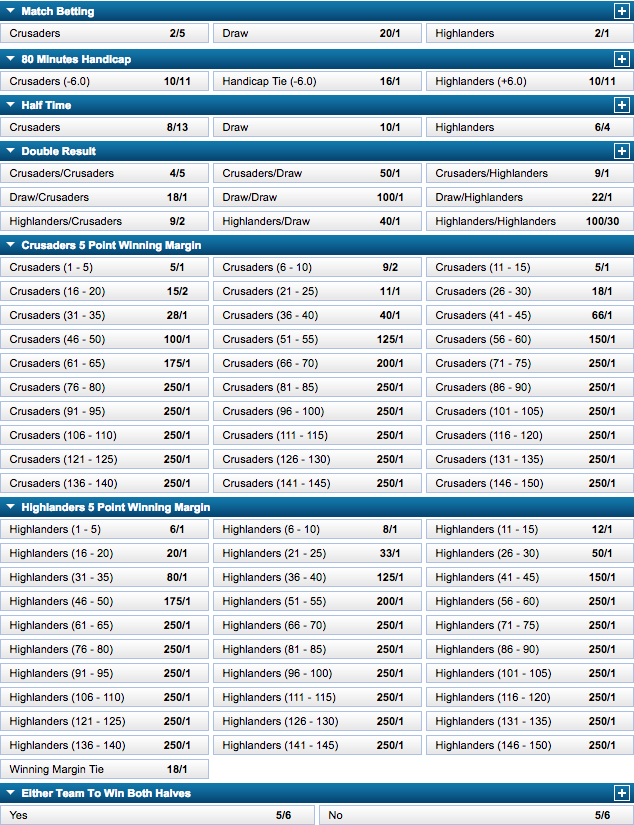 The third qualifying match will take place at the Emirates Airline Park in Johannesburg between the Lions and Sharks. These teams met in the final round of regular season fixtures and the Lions came out on top in Durban. At home, the Lions are very strong and have won their last 13 matches in a row including finals victories over the Crusaders and Highlanders in 2016.

The Sharks finished 23 points behind the Lions in Africa Conference 2 and they lost the away match to them earlier in the season. The Sharks have won four games away from home including a victory over the Brumbies but the Lions have the edge and have not lost to a team from South Africa since Round 12 in 2015.

The Lions are heavy favourites to win this match at 1/9 with William Hill and could take it by an 11 to 15-point margin, which is on offer at 5/1. 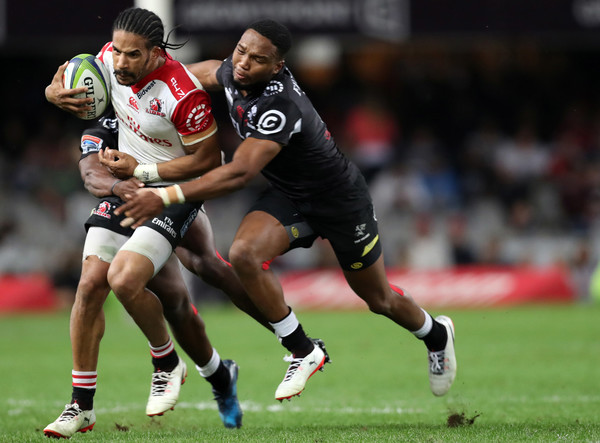 The fourth and final qualifying match is between the Stormers and Chiefs at the DHL Newlands Stadium in Cape Town.

The teams met at the same stage last season and it was the Chiefs who left Newlands as the victors, winning the match 60-21. However, the Stormers defeated the Chiefs by 8 points in Round 7 of the current campaign and will be looking at this result for confidence ahead of the match.

The Chiefs finished third in the New Zealand Conference but were only 6 points behind the Crusaders who finished in first. They won 12, drawn 1 and lost 1 of their 14 matches, which is a very good record. Aside from the Stormers, the Crusaders were the only team to beat them. 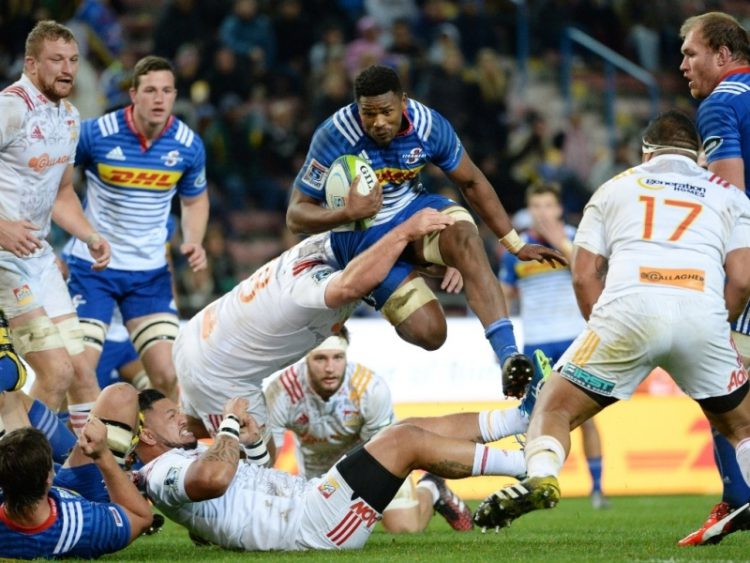 This is perhaps the closest of the four matches and although the Chiefs come in as favourites, the Stormers make a good bet to repeat their earlier victory this season and win this one at 11/8 with sportsbook William Hill. 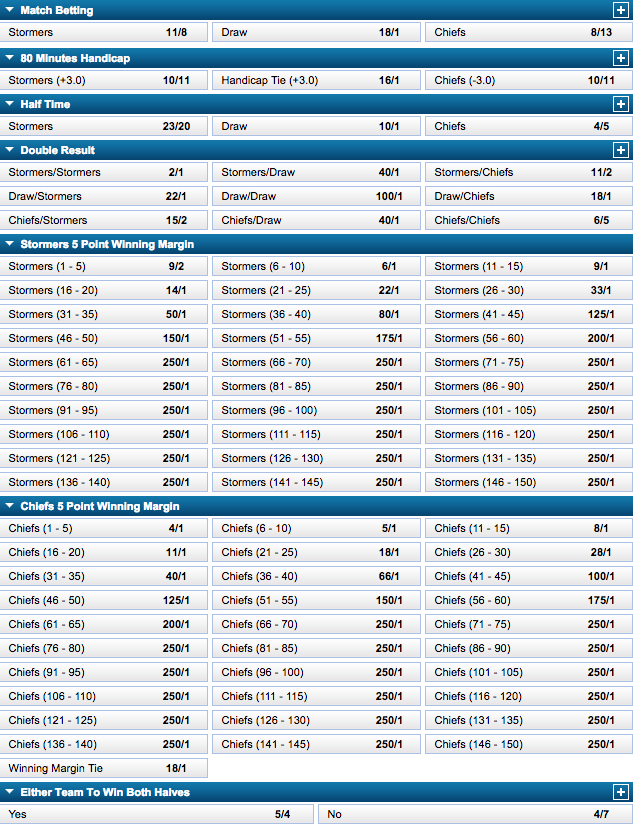 Looking ahead to the potential semi-finals and final of Super Rugby 2017, much will depend on how the teams perform in the qualifiers. The Lions should come through their match convincingly and this would set them up for a semi-final at home possibly against the Hurricanes. The Hurricanes have had the upper hand over the Lions in recent seasons having defeated them in the final last year. However do not be surprised to see the Lions make amends for their defeat in the 2016 final.

The second semi-final is not so easy to predict and if the Stormers do come through against the Chiefs, chances are they will meet the Crusaders. The Crusaders defeated the Chiefs in the regular season coming away from Hamilton with an entertaining 31-24 victory. Therefore, we could see the Crusaders and Lions reach the Super Rugby 2017 Grand Final. And if this in fact is how it all plays out, you can get 21/10 with Paddy Power for this to happen. 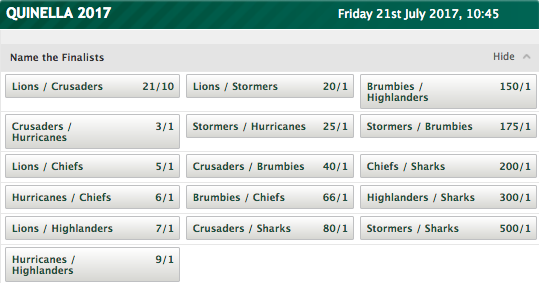 Both the Crusaders and Lions start the Super Rugby Finals at 2/1 to win the tournament with William Hill and since the teams did not meet each other this season, this would definitely add some spice to the final match.

The last time the teams met was during the 2016 season splitting their season series one game apiece. If they are to meet again in the Grand Final this season, the Lions experience of the final 12 months ago may give them edge. Bookmaker Paddy Power offers 9/5 for the winner of the Grand Final to be South African but with the Lions at 2/1 to win the tournament, and having to eliminate the Sharks along the way, it makes little sense to go for that bet.

Can the Lions become the first team from South Africa to win Super Rugby since the Bulls in 2010? The winner will be known soon enough! 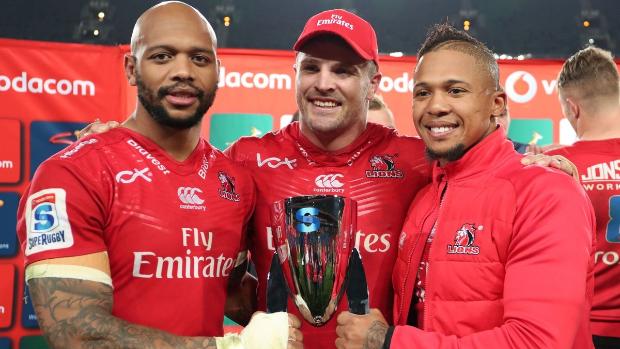 【Paddy Power】3 Done, Going for 4! Will Toulon Once Again Be Crowned European Champs?

Irish bookmaker Paddy Power's European Champions Cup odds are out! Who's favored to win their pool and eventually the final at Stade des Lumières in May?

UK bookmaker Bet Victor reveals the up-to-date odds on the 2015 Super Rugby season. How do the 2014 champ Waratahs stack up against the rest of the field?
Podcast Episode #14: Who’ll Gain the Upper Hand in Europa League Qualifying? Mr. Bookmaker Chimes In!
Will Ledecky & Peaty Be the Stars in Budapest? The Pool in Hungary Takes Center Stage!
Home
Rugby