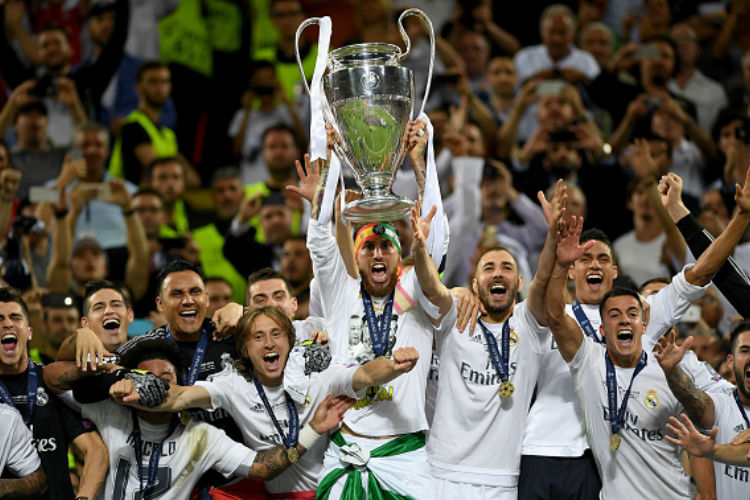 The 2016/17 Champions League is the 62nd time the famous European club football tournament has been contested and the 25th since the Champions League format was introduced. This season, the final will be played in the Millennium Stadium, currently known as the Principality Stadium for sponsorship reasons. The stadium is in Cardiff, Wales and has a capacity of 74,500 people. 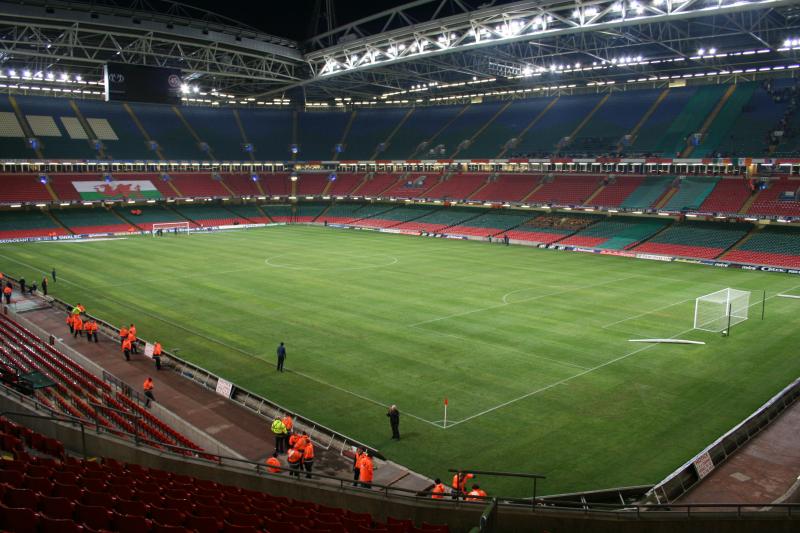 There is a lot of football to be played before we reach the final of the Champions League this season. Following the completion of the group stages, the top two teams in each of the eight groups progressed to the Round of 16. There were some upsets along the way, which saw Borussia Dortmund top their group, leaving Real Madrid in second place and Tottenham Hotspur finishing third in their group, which means that they will drop down to the UEFA Europa League. However, the big teams managed to negotiate their way successfully through the groups and made it to the knockout stages. The remaining 16 teams have been drawn into the following eight matches, which will be played over two legs to decide who will progress: 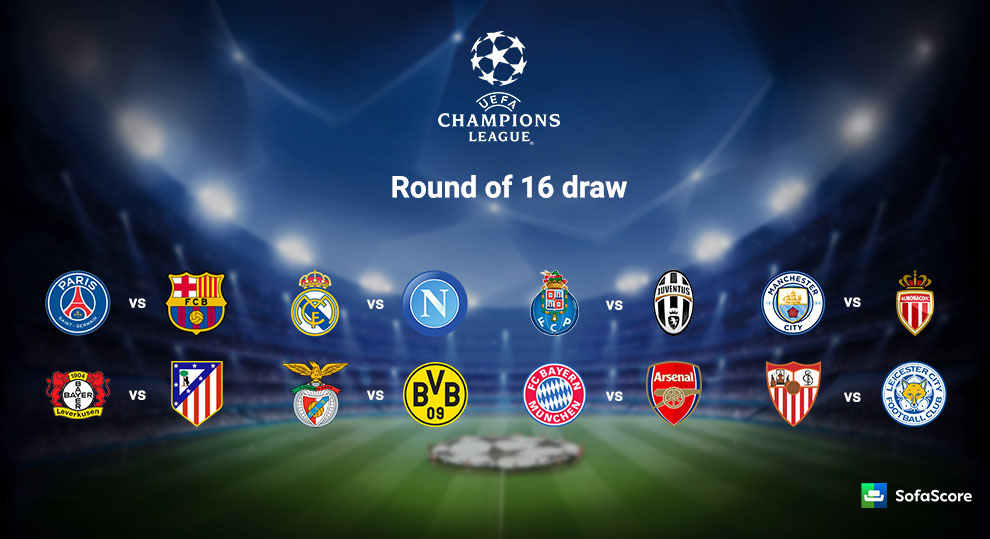 Away goals count as double in these matches. For example, if the first leg of a match ends 0-0 and the second leg finishes 1-1, the away team in the second leg will progress on the away goals rule. While some fans dislike this rule, it can make for some very exciting matches and the prospect of a team snatching an away goal adds to the drama, especially in the second leg. Who can forget the goal scored by Atletico Madrid, away at Bayern Munich in the semi-final second leg last season? The match was poised at 1-1 on aggregate before Antoine Griezmann put through a goal and beat Manuel Neuer to silence Allianz Arena. The Champions League knockout stages are made for moments like these.

There are some mouth-watering ties to look forward to in the Champions League Round of 16 this season. Perhaps the pick of the games is Real Madrid vs. Napoli. The defending champions have a tough tie on their hands especially with the second leg being in Naples. Both teams are capable of scoring goals and it would be a shock if both legs do not feature over 2.5 goals. You must back Real Madrid to win the first leg with both teams scoring at 15/8 with bet365. Napoli will give the Spanish giants plenty to think about but Zinedine Zidane’s team should have enough over both legs to go through and you can back them at 2/9 with bet365 to qualify for the quarter-finals.

Seeing Paris Saint-Germain and Barcelona come head-to-head in the Champions League is nothing new and they meet again in the Round of 16 this season. Over the past four years, the teams have met six times in the Champions League and PSG has won only once. Considering the team from the French capital is probably worse off now than they have been in previous encounters with Barcelona, it does not bode well for Unai Emery. Barcelona has not been firing on all cylinders this season but with Luis Suarez, Lionel Messi and Neymar in attack, they will be aiming to score goals in Paris and take the game away from PSG before the second leg in Camp Nou. Barcelona is available at 11/10 to win the first leg and 2/9 to qualify for the next round. 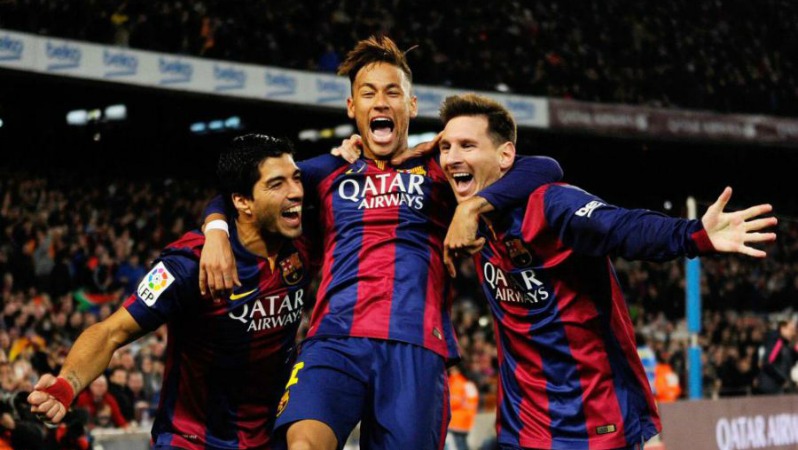 Another pairing which we have seen a few times before in recent years sees Bayern Munich meet Arsenal. Having topped their group, something which they have failed to do in recent years, Arsene Wenger was hoping for a much easier draw while instead the Gunners will travel to Bavaria for the first leg of the tie. It will be the third time the teams have met at this stage of the tournament. The Germans came through in both 2012/13 and 2013/14. While history is not on Arsenal’s side in addition to being seemingly out of the Premier League title race, don’t count them out as Bayern has not been at their best this season under Carlo Ancelotti. Bayern is coming in as the favorite to win the tie at 9/20 with sportsbook bet365 but with their defensive problems, Arsenal could snatch a draw in the first leg, a result they achieved in 2013/14 and that’s on offer at 7/2, which would make things interesting for the second leg.

Manchester City fans were happy with their draw at the time as Monaco came out of the hat but this has turned into one of the most intriguing matches of the 2016/17 Champions League Round of 16. Manchester City remains the heavy favourites with bet365 to win the first leg at home at 1/2 and progress over the two legs at 2/7 but Monaco will have other ideas. City has been inconsistent this season, especially defensively where they have looked suspect and Monaco brings with them the most potent attacking force in Europe this season. Leonardo Jardim’s team has been scoring goals for fun and should be looking forward to testing themselves against Manchester City’s creaking defense. If the Ligue 1 club can score a couple of away goals, they could easily come through this tie and are available at 5/2 to qualify, which is good value. Can Radamel Falcao return to Manchester with a bang? 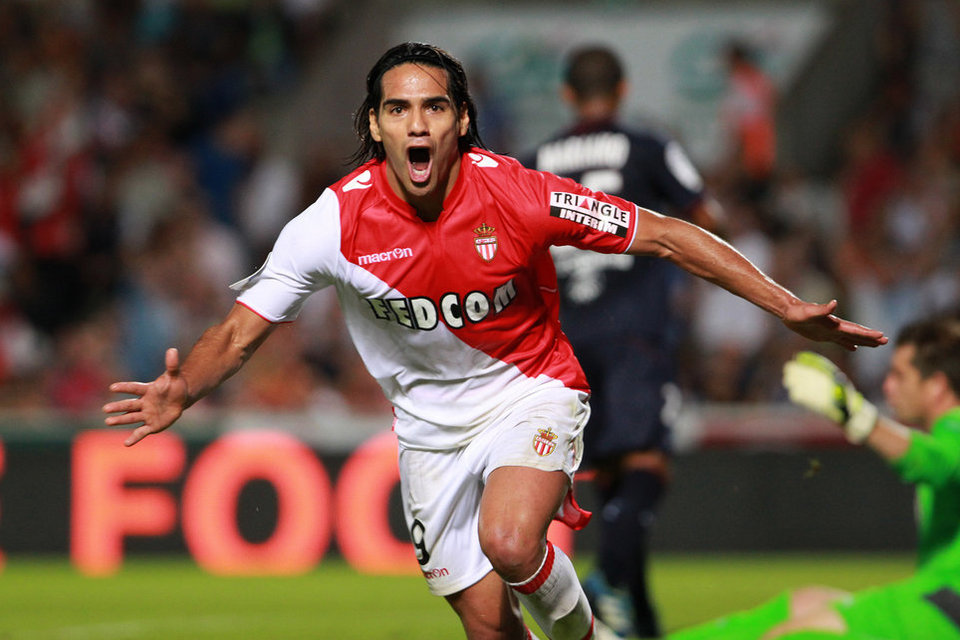 Looking at the remaining four ties and you must fancy Sevilla to get the job done against a struggling Leicester City and Juventus to see off the challenge of Porto. Borussia Dortmund has enough attacking flair to score the goals to beat Benfica and being all but out of the title race in Spain, Atletico Madrid will be fully focused on their tie with Bayer Leverkusen and should get the job done. 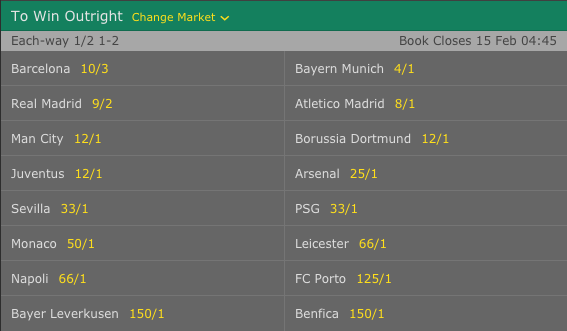 In terms of individual honours in the Champions League this season, Barcelona’s Lionel Messi comes into the Round of 16 with 10 goals to his name, four more than second placed Edinson Cavani of PSG. Messi has not finished as outright top scorer in the competition since 2011/12 and with Cristiano Ronaldo all but out of the race, bet365 has the Argentine at 1/8 to come out on top of the pile this season. With Cavani likely to leave the tournament at the Round of 16 stage, much will depend on the goals Robert Lewandowski can score against Arsenal. The Pole is currently five goals behind Messi and it will take a monumental effort for him to come close, hence the price of 16/1 for Lewandowski to finish as top scorer in the Champions League this season. 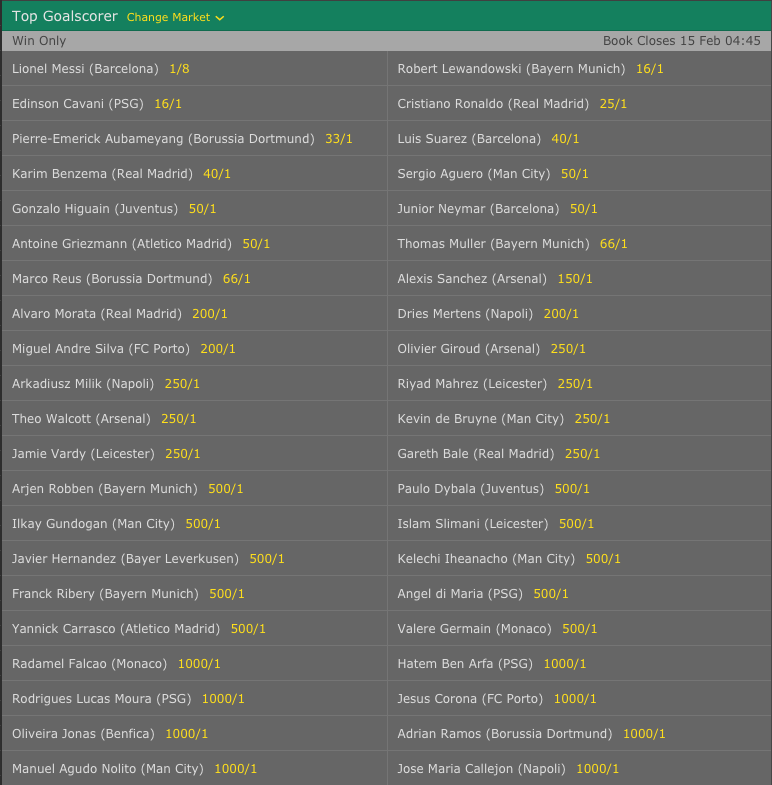 So, who will come through and make it to the final and lift the Champions League trophy this season? Real Madrid, the defending champion is on offer at 9/2 with bookie bet365 and on the face of it, this is decent value. However, since the formation of the Champions League as it is today, no one has managed to retain the trophy. Barcelona is the favourite at 10/3 but have not been at their best this season. Having said that, they have the players who can win matches on their own and this makes a huge difference. Looking elsewhere and Juventus make for an interesting bet at 12/1. Massimiliano Allegri’s team has not had things all their own way in Serie A this season but qualified for the knockout stages of the Champions League without losing a game. When fully fit, their defense is very tough and in Gonzalo Higuain and Paulo Dybala, they have a world class strike force who can settle games with one chance. The Italian giants reached the final in 2014/15, so they know what it takes to get there, which makes them a great bet to win the 2016/17 UEFA Champions League. 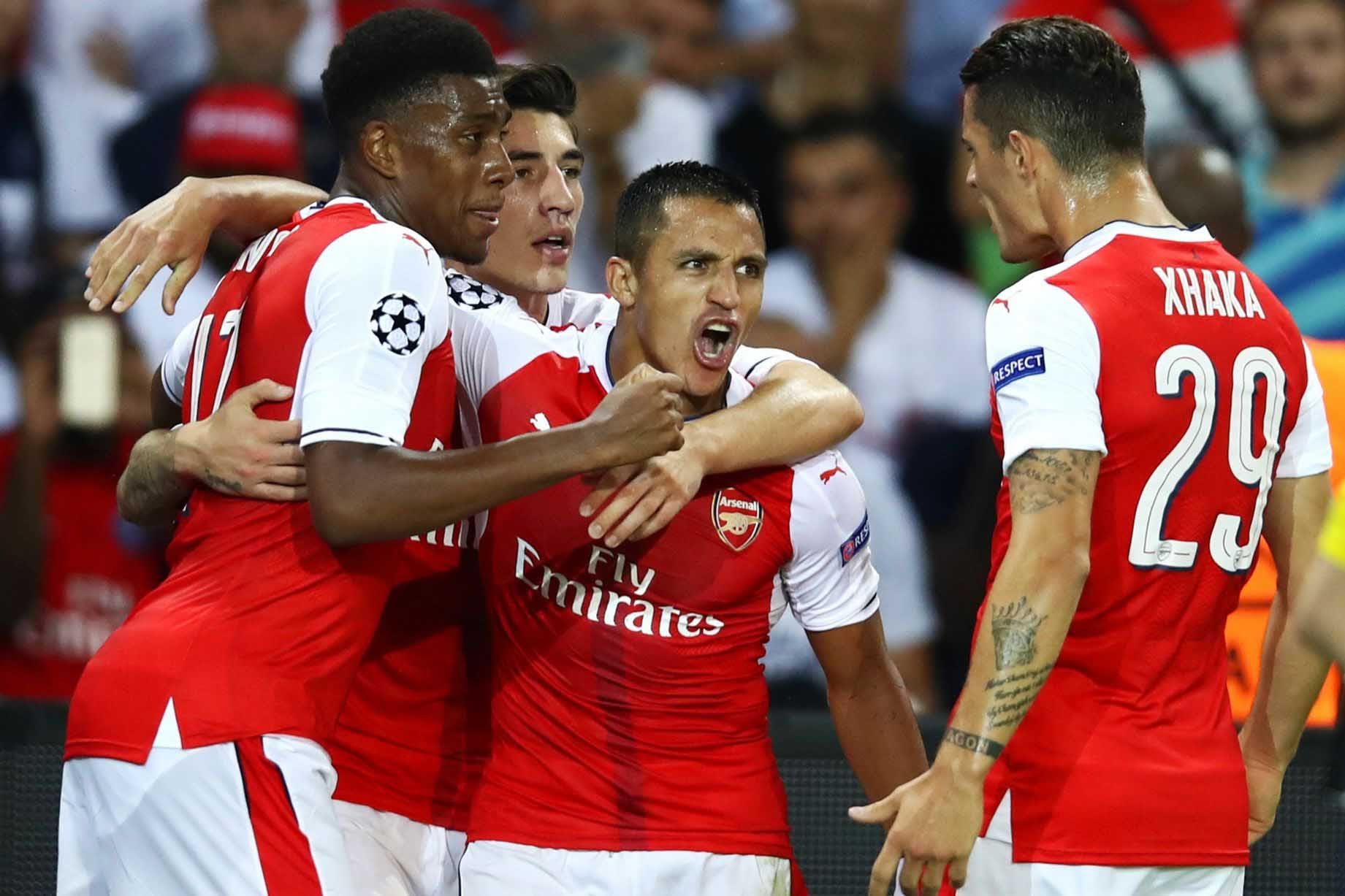 The oddsmakers at Irish bookie Paddy Power have spoken! Who has the inside edge to be crowned Asia’s #1 team? Can Guangzhou Evergrande repeat?
【bet365】Patriots vs. Falcons: The Betting Lines for Super Bowl LI in Houston are Out!
【Bookmaker】2016-17 Europa League: Who’ll Be the Last Team Standing in Solna?
Home
Soccer