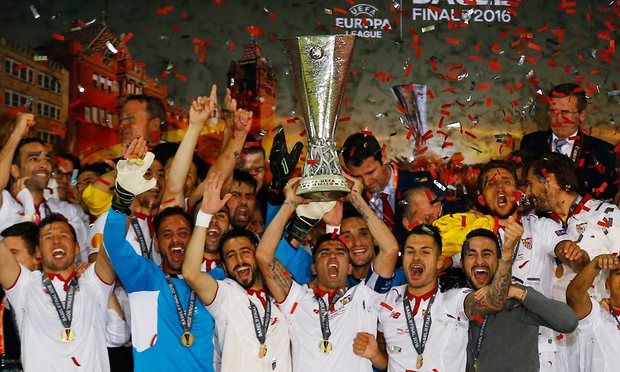 The 2016/17 UEFA Europa League has reached the knockout stages and there are some great ties to look forward to with some of European football’s biggest clubs in action. This season sees the 46th time the tournament is being played and the eighth season since the restructuring of the tournament under the Europa League name. This season, the final will be hosted by the Friends Arena in Solna, Sweden. 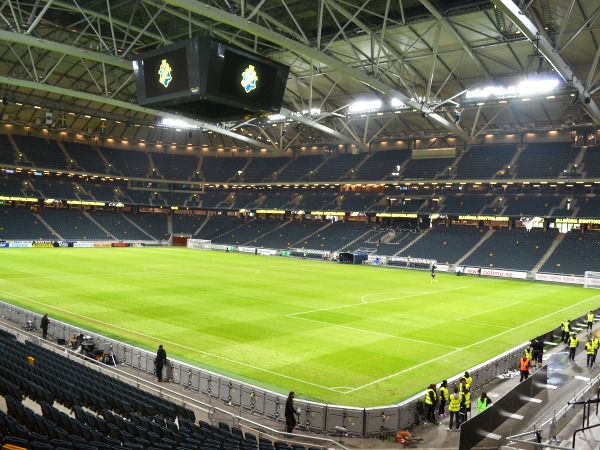 The Europa League and the UEFA Cup as it was known before the rebranding has seen some fantastic winners over the years. The likes of Liverpool, Juventus, Real Madrid, Inter Milan, Ajax and Bayern Munich have all won this trophy. The most recent winner of the Europa League is Sevilla, who set a record in winning it for the third season in a row when they defeated Liverpool in a memorable final last season. With Sevilla in the Champions League this season, they are unable to defend their trophy this time around so we will have a new winner. Will the run of three victories by the Spanish team ever be matched?

With the group stages complete we enter the Round of 32 stage of the Europe League, which is one of the most exciting times of the tournament. The top teams from the groups have progressed and there are eight additional teams, who have joined the tournament from the Champions League adding to the overall quality of the competition. However, as if to underline the strength of the Europa League this season, we lost some big teams in the group stages, such as Feyenoord and Inter Milan. There are 16 matches in total to enjoy with the pick of fixtures including: 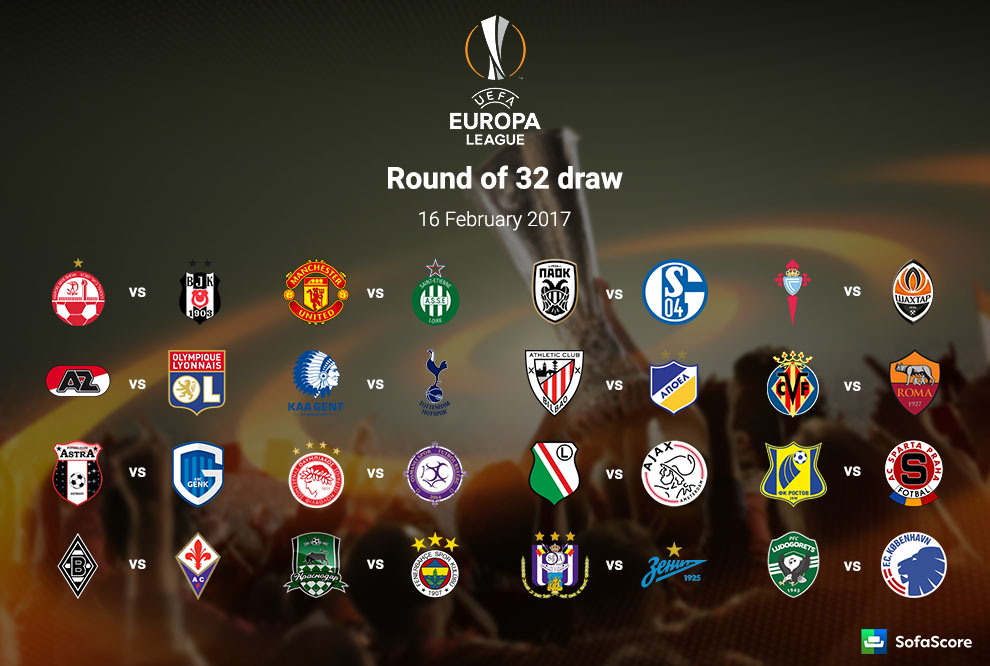 Much like the Champions League knockout stages, all ties are played over two legs from the Round of 32 up to and including the semi-finals. The away goals rule is in operation throughout the knockout rounds of the Europa League. A good example of which was the tie between Saint Etienne and Basel last season. The tie ended with the scores level at 4-4 but Basel scored two goals in France, whereas Saint Etienne only managed one in Switzerland, so away goals can mean so much at this stage of the tournament.

Perhaps the pick of 2016/17 UEFA Europa League Round of 32 matches is the tie between Villarreal and Roma. Both teams are doing well in their respective domestic leagues and qualified from the group stages of this competition. Villarreal reached the semi-final stage of the Europa League last season whereas Roma was eliminated from the Champions League by Real Madrid at the Round of 16 stage. Both teams are strong and this will easily be Villarreal’s toughest match of the tournament to date. Interestingly, Villarreal is the favourite to win the first leg at 7/5 with sportsbook bet365 but Roma is the favourite to progress over the two legs at 8/13. This means we should be in for two very close games. Also keep in mind that Villarreal has been very strong at home this season although two of their four defeats have come in European competition. If Roma can stay in the match after the first leg, even through a 2-1 defeat, which is on offer at 17/2 with bet365, they should have enough to turn things around at the Stadio Olimpico with Villarreal struggling away from home this season.

Another intriguing match sees Borussia Monchengladbach and Fiorentina collide, firstly at Borussia Park and then in Florence at the Artemio Franchi. The German club finished third in their Champions League group, which was extremely tough and included Barcelona, Manchester City and Celtic. Fiorentina topped their Europa League group and finished 6 points clear of the third placed team. This is another tie where the bookmakers have Monchengladbach as favourites to win the first leg at home at 21/10 with bet365 but slight outsiders at 1/1 to win the tie. Away goals could be a big factor in this tie but Fiorentina has been very strong at home this season and with the second leg in Florence, they have the slight advantage.

Manchester United’s world record signing, Paul Pogba, is set to come face to face with his brother as the Red Devils welcome Saint Etienne to Old Trafford for the first leg of their Round of 32 game. Jose Mourinho’s team struggled to qualify from their group but won all three of their home matches, conceding just 1 goal in the process and are heavy favourites at 2/7 with bookie bet365 to win the match. However, Saint Etienne should not be underestimated having come through the group stages and two qualifying rounds undefeated away from home. It’s unlikely they will win at Old Trafford but 17/4 for them to come away with a draw is tempting. As is the 10/3 for them to qualify for the next round. Manchester United has lost five of their last six away Europa League games and Saint Etienne is undefeated in their last ten at the Stade Geoffroy-Guichard. This is going to be another close tie but Manchester United has a quality squad with a toughness about them at the moment and they could scrape through.

Other interesting ties include Gent vs. Tottenham, the latter of which dropped out of the Champions League after a disappointing campaign. Gent needed a win in their final game to qualify in second place from their Europa League group and much will depend on the strength of the team fielded by Mauricio Pochettino and their ability to cope with playing at Wembley. At 11/4 with bet365, the draw in the first leg in Belgium is a good bet but expect Tottenham to progress at 1/6.

The meeting between Celta Vigo and Shakhtar Donetsk could produce two excellent games. The Spaniards are at home in the first leg and have lost only one of their last sixteen games at the Estadio de Balaídos. This makes the 8/5 with bet365 for them to win the first leg tempting but Shakhtar has a proud history in this competition and came through the group stages with a 100% record, which makes them a dangerous opponent. However, their record against Spanish clubs is very poor with just four victories from twenty-one games played, which makes the 11/8 for Celta Vigo to qualify a good bet. 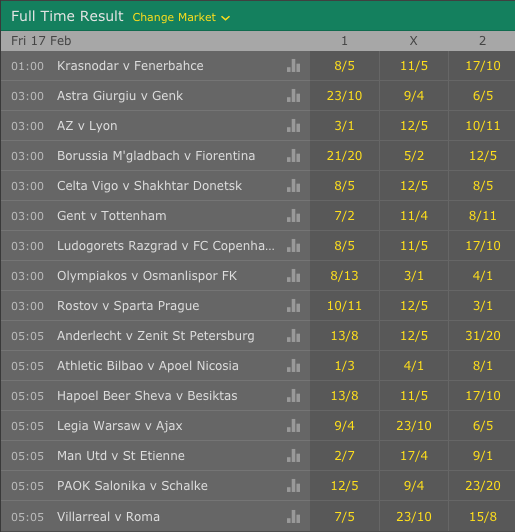 Looking at the performance of individual players and the top goal scorers market makes for interesting reading. Following the group stages, Aritz Aduriz of Athletic Bilbao and Giuliano of Zenit Saint Petersburg top the charts with 6 goals and can be backed at 5/2 and 3/1 with bookmaker bet365 respectively to finish the tournament as top scorer. With Bilbao likely to progress against APOEL Nicosia in the Round of 32, Aduriz could easily add to his tally and if they go deep in the competition, there is every chance he will finish the Europa League as top scorer. If not, Roma’s Edin Dzeko is poised on 5 goals and if the Italians defeat Villarreal the Bosnian striker could add to his current total and can be backed at 6/1 to finish as top scorer. Remaining in Italy, Fiorentina’s Nikola Kalinic makes a good bet at 12/1. Having netted 4 times in the group stages, the Croatian striker has been in good form this season and should return from a knee injury in time for the Round of 32.

In terms of who can win the tournament, Manchester United is coming in as the favourite at William Hill at 7/2. However, they have not shown enough in the tournament this season to justify their price and perhaps reputation is what is pushing the price down. The same can be said of Tottenham Hotspur, who after a disastrous Champions League campaign is second in the list priced at 7/1 to win the Europa League.

It’s worth looking elsewhere and both Shakhtar Donetsk and Roma, who both qualified from the group stages make interesting bets to win the tournament at 12/1 and 10/1 respectively. However, with very little to play for domestically, Fiorentina makes an intriguing bet at 20/1. The Italians finished top of their group, losing only one game and have two of the tournament’s top goal scorers in their ranks. With Champions League football on offer to the winners, this makes the Europa League very enticing for a team like Fiorentina. If they can overcome Borussia Monchengladbach, who are currently sitting mid-table in the Bundesliga in the Round of 32, watch their odds shorten significantly. Fiorentina is a great bet to win the 2016/17 UEFA Europa League. 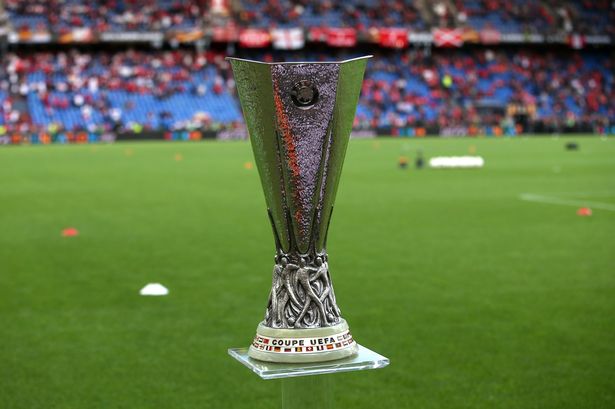 PSG heads to Barcelona for the first time since blowing a 4-0 first-leg lead with a historical 6-1 loss in 2017. Bookmaker 10Bet has all the latest odds for the UEFA Champions League.