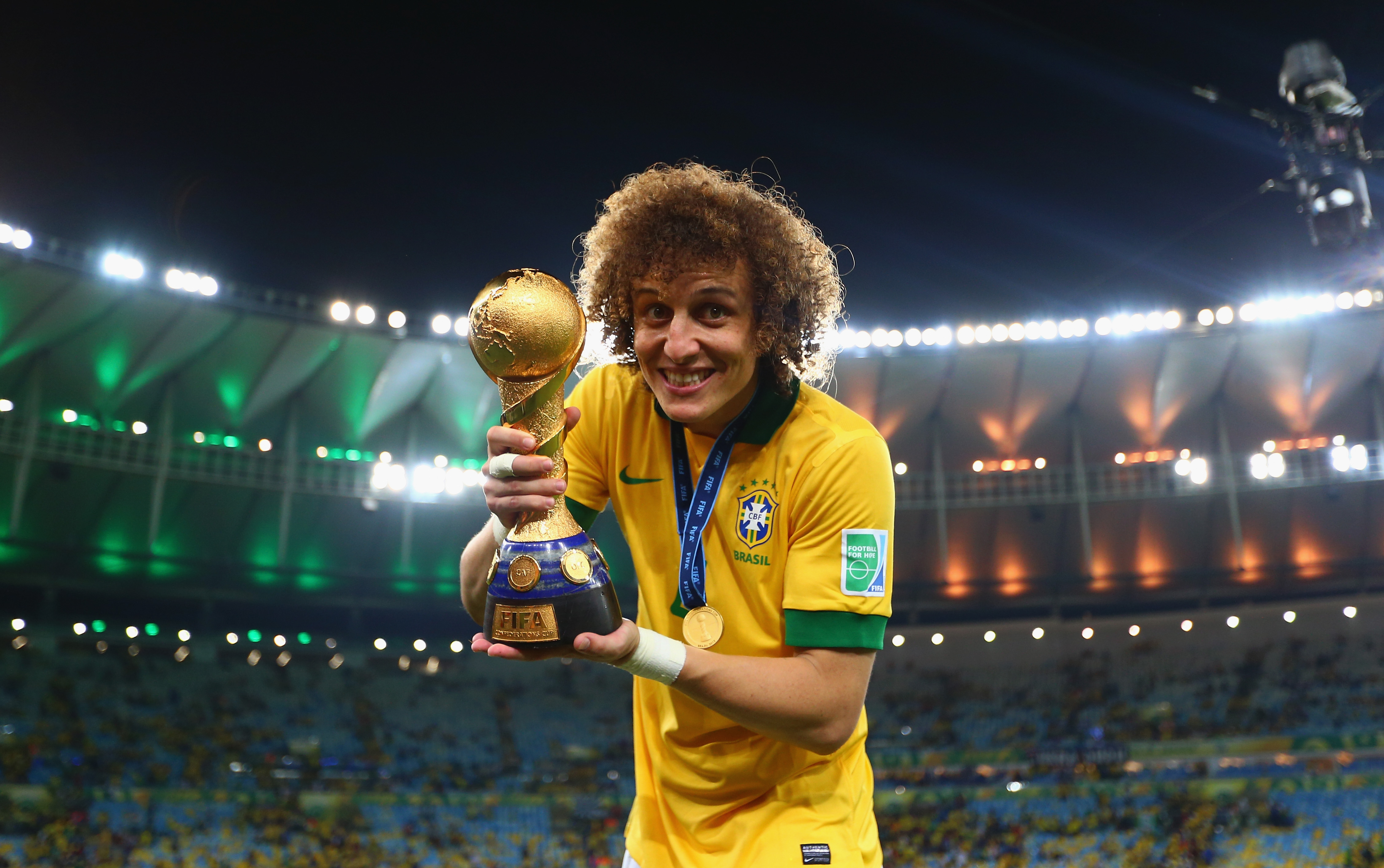 The 2017 Confederations Cup will be the tenth edition of the FIFA international football tournament. Played one year before the World Cup, the event is designed to give the participating teams and the host nation the opportunity to add to their preparations for the World Cup.

The tournament this year will be held in Russia between the 17th of June and 2nd of July.

The Confederations Cup, formerly known as the King Fahd Cup, was previously contested between Saudi Arabia and other continental champions. After two events under this name, the title was changed and from 2001 onwards the tournament was staged in the country which was chosen to host the World Cup a year later.

The most successful team in the history of the event is Brazil, who have won the Confederations Cup four times. Their most recent success came in the 2013 tournament, when the Brazilian national team won it on home soil, defeating Spain in the final 3-0.

Unfortunately for Brazil, winner of the previous three Confederation Cup tournaments, they have failed to qualify for the 2017 event in Russia. To qualify for the Confederations Cup, you must either be the host nation, like Russia, or win your regional nation title. On that basis, the eight teams taking part in the 2017 Confederations Cup are:
Hosts Russia
2014 World Cup winners Germany
UEFA Euro 2016 winners Portugal
2015 AFC Asian Cup winners Australia
2015 Copa America winners Chile
2015 CONCACAF winners Mexico
2016 OFC Nations Cup winners New Zealand
2017 African Cup of Nations winners Cameroon

Four stadiums will be used throughout the event in Moscow, Saint Petersburg, Kazan and Sochi. Of these, the Krestovsky Stadium is Saint Petersburg is the largest and has a capacity of 68,000 people. It was recently opened in 2017 and is therefore the most modern of the four stadiums being used and will host the Confederations Cup final. 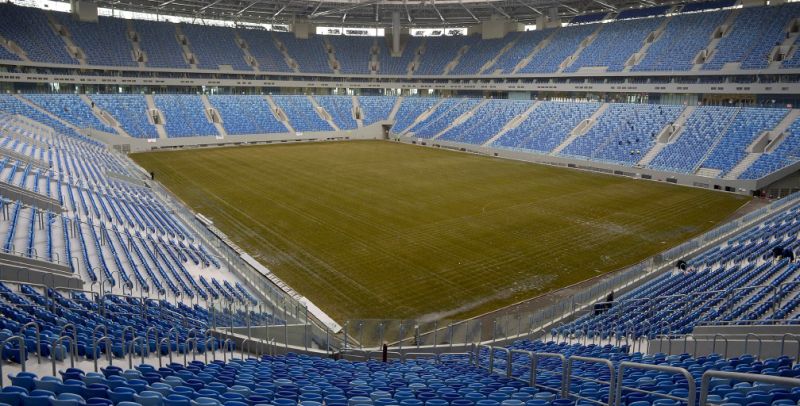 The eight teams have been drawn into two groups of four and will play each other once in a round-robin format. With 3 points for a win, 1 for a draw and 0 for a loss, the top two teams will qualify for the semi-finals. The semi-finals will be played in a knockout format with extra-time and penalties to decide the winner if the score is even after 90 minutes. 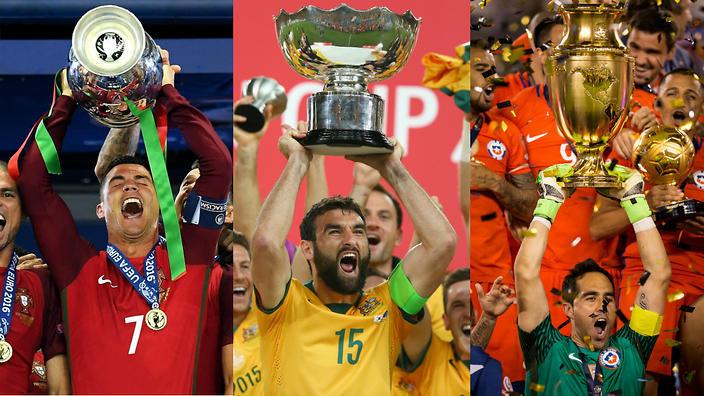 As hosts, Russia will be hoping to put on a show for their fans, who have had very little to shout about recently. They were poor at the 2016 European Championship and need to improve dramatically if they are to have a positive impact on this tournament and the 2018 World Cup.

Russia is priced at 9/1 to win the 2017 Confederations Cup but may struggle to get out of Group A. Disappointing defeats at home to Costa Rica and Qatar leave new head coach Stanislav Cherchesov with work to do but they have recently defeated Hungary and picked up draws against Belgium and Chile. The loss of striker Artem Dzyuba to injury will hurt and success for Russia will be to qualify from Group A. They are 4/6 to make the semi-finals.

The favourite to qualify from Group A and go far in the tournament is none other than Portugal. Having won Euro 2016, the Portuguese made a bad start in World Cup qualification losing to Switzerland but have come back strongly and should make it to Russia in 2018.

Fernando Santos has named a strong squad including the likes of Cristiano Ronaldo, Bernardo Silva, Andre Gomes and Nani. If Ronaldo is up for it, having enjoyed a period of rest, Portugal should finish top of Group A and can be backed at 10/11 with online bookie bet365 to do just that. With the attacking talent at their disposal, they have what it takes to beat anyone on their day and are 5/2 to win the 2017 Confederations Cup.

Most likely to join Portugal in the semi-finals from Group A is Mexico. Having picked up a recent 1-1 draw with USA in World Cup qualifying, Mexico is looking good for a spot in Russia come 2018. They have yet to lose a game in World Cup qualifying but Portugal will be the toughest team they have met in a competitive match for some time.

Juan Carlos Osorio has picked a talented squad especially going forward with players mainly based in Mexico and Europe. Their recent defeat to Croatia shows they may struggle to finish above Portugal in Group A but should come second ahead of Russia and New Zealand. Mexico makes an interesting outside bet to win the 2017 Confederations Cup at 9/1 with sportsbook bet365.

One name stands out in Group B and that’s Germany. Joachim Low’s team is on course to qualify for the 2018 World Cup with ease having won all six of their qualifying matches. Germany has selected an interesting squad for the tournament with only Matthias Ginter, Julian Draxler and Shkodran Mustafi included from their 2014 World Cup winning squad.

However, they have some great young talent in their squad, who have enjoyed a good season at club level and come into the 2017 Confederations Cup full of confidence. Only three players have more than 15 caps in the squad, so inexperience could play a part and it will be interesting to see how the new additions to the squad cope with the pressure of a tournament.

Chile will be the biggest threat to Germany in Group B and Juan Antonio Pizzi is clearly taking this tournament seriously having selected the likes of Arturo Vidal, Claudio Bravo and Alexis Sanchez to be on the team. Chile has won the last two Copa America tournaments but life in 2018 World Cup qualifying has been tough.

Chile, which currently sits in fourth place in the final automatic qualifying spot with four games remaining, could find Argentina in South America move above them before all is said and done. Aside from Argentina there are a total of five teams that remain in contention for a place in Russia from the continent so a lot is still much up for grabs. Going back to the Confederations Cup for Chile, much will depend on the fitness levels of Vidal and Sanchez but they have enough to finish second in Group A and qualify for the semi-final if all cylinders are in sync as their odds of 2/7 with bet365 suggest.

Australia and Cameroon make up the rest of Group B and although they are both stronger than New Zealand from Group A, they will struggle to progress. Cameroon, who caused an upset by winning the 2017 Africa Cup of Nations is 9/4 to qualify from the group with Australia who are battling to qualify for the 2018 World Cup out at 10/3. Of the two, Cameroon is the team that could cause an upset in this group but they need a positive result against Chile in their first game to set the tone for that to happen.

Looking at the top goal scorers market, there are some exciting names to look out for in the tournament. Cristiano Ronaldo is the most obvious at 6/4 with Chile’s Alexis Sanchez at 5/1.

If Germany is to go deep in the tournament, they will be relying on Timo Werner and Sandro Wagner to get the goals. Werner is 10/1 and Wagner, who recently scored a hat trick for Germany, all be it against San Marino, is on offer at 12/1. Mexico will be relying on the goals of Javier Hernandez, who has an excellent scoring record for his country. As one of the tournament outsiders, Mexico will need his goals if they are to win games and Hernandez is 20/1 to finish as top goal scorer at the 2017 Confederations Cup. 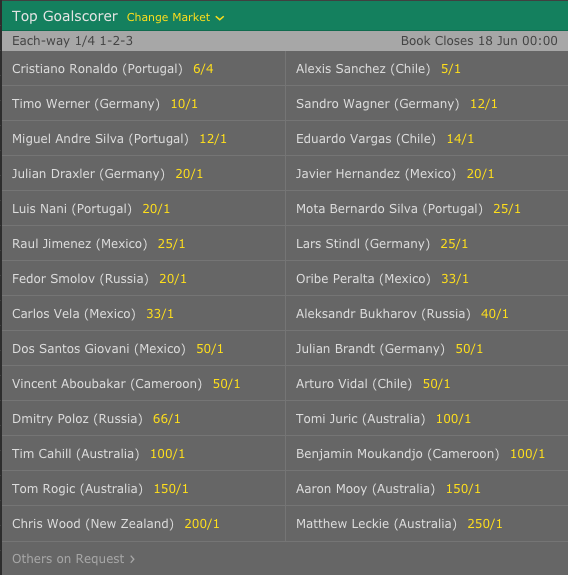 The four semi-finalists are likely to be Portugal, Mexico, Germany and Chile. How the draw goes depends on who finishes at the top of each group. However, the two standout names are Portugal and Germany.

With Portugal’s strong and experienced squad, they have the upper hand and at 5/2 with bet365, make a good bet to win the 2017 Confederations Cup. You can also get 5/1 for a Portugal vs. Germany final. 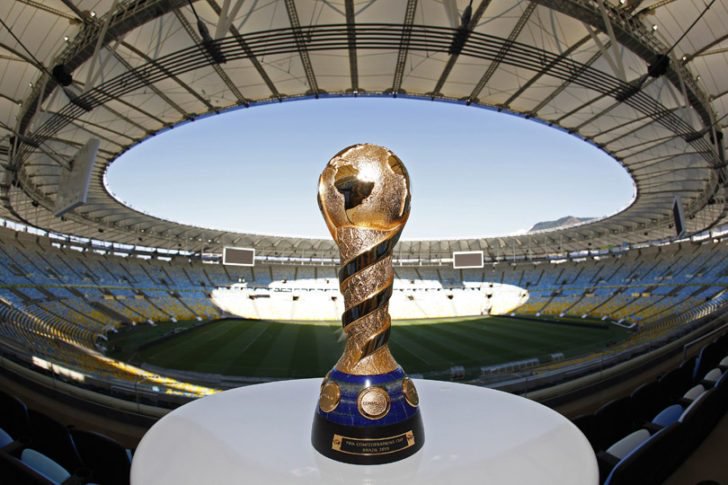 Looking for some action on the knockout stage of UEFA Champions League? Look no further than bookie Top Bet!

Online bookmaker 188BET highlights which nation has what it takes to ascend to the pinnacle of European football supremacy! Found out where your team sits…
【Podcast】Episode #9: Who’ll Claim the UEFA European U-21 Championship?
【10Bet】Which Horse Will Be the Talk of Ascot 2017? The Odds for Britain’s Richest Racing Meet are Out!
Home
Soccer