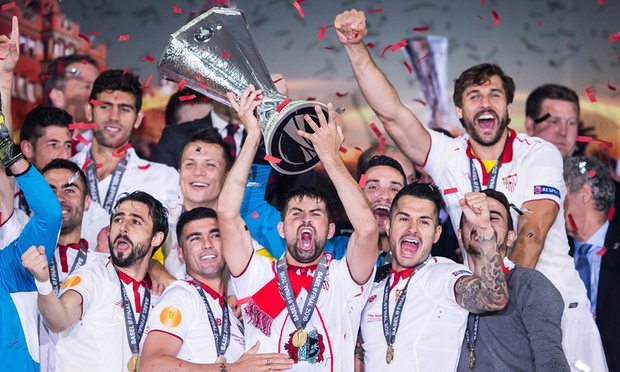 The 2016/17 UEFA Europa League is the 46th instalment of the famous European club football competition. This is a tournament that has provided some of the greatest moments in European club football history and was previously known as the UEFA Cup. Finals were once contested over two legs following a straight knockout tournament but the current format features a group stage followed by a knockout stage. The final is played as a one-off match in a stadium chosen by UEFA prior to the start of the tournament. The 2016/17 Europa League final will be played in the Friends Arena in Sweden. 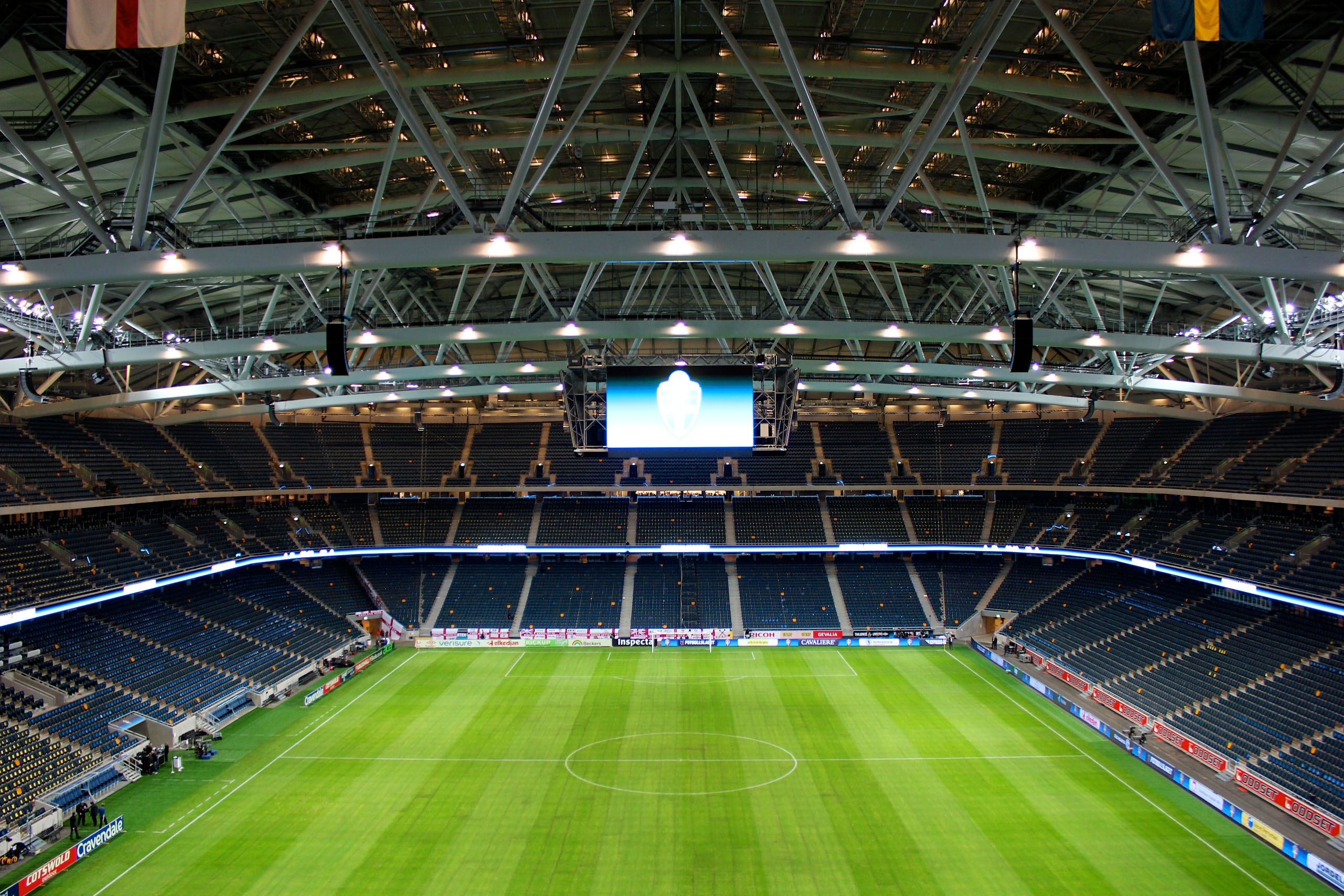 Previous winners of this competition include Liverpool, Juventus, Real Madrid, Inter Milan, Ajax, Bayern Munich, Atletico Madrid and Chelsea. The current holder of the Europa League title is none other than Sevilla, who made history by becoming the first team to win the tournament for three seasons in a row. Sevilla is playing in the Champions League this season by way of winning the Europa League again and unless they come third in their group, they will not be able to defend their trophy for a fourth time.

With three games played in each of the 12 Europa League groups this season, only three teams have maximum points and look a safe bet to make it to the last 32 of the competition.

In Group D, Zenit St. Petersburg has taken control and sits 5 points clear of second place Dundalk. The Russians have been in rich goal scoring form having netted 11 goals in their three games, 5 of which came in the home match against AZ Alkmaar in week two. Therefore, it’s little surprise to see Zenit installed as favourites to top the group at 1/50 with bet365.

Another Eastern European team doing well is Shakhtar Donetsk, a team who has previously won the Europa League, doing so back in 2008/09. The Ukrainians also have a 5-point cushion at the top of their group and having recorded a 5-0 home victory over Ghent last time out, they are set to make the knockout stages. Germany’s Schalke is the other team with maximum points from their opening three games, although Krasnodar is keeping things interesting in Group I with 6 points. That being said, Schalke defeated them in Russia last time out and must be backed at 1/6 to finish top of their group.

There are several groups that remain very close and there are some exciting matches to look forward to in the second half of the Europa League group stage this season.

Group A features some very strong teams with Feyenoord, Manchester United and Fenerbahce all having a good chance of making the knockout stages. Match day four sees Manchester United travel to Turkey to take on Fenerbahce and despite defeating them comfortably at home, the reverse fixture is going to be a different prospect. Fenerbahce has done well against Manchester United at home in the past including a 3-0 win and United’s recent record on the road in the Europa League is poor, whereas Fenerbahce’s home form in the competition is good. Fenerbahce is 15/8 to win the match and 8/1 to win the group and with two home games still to come in the atmospheric Şükrü Saracoğlu Stadium, they are certainly capable of topping the group. 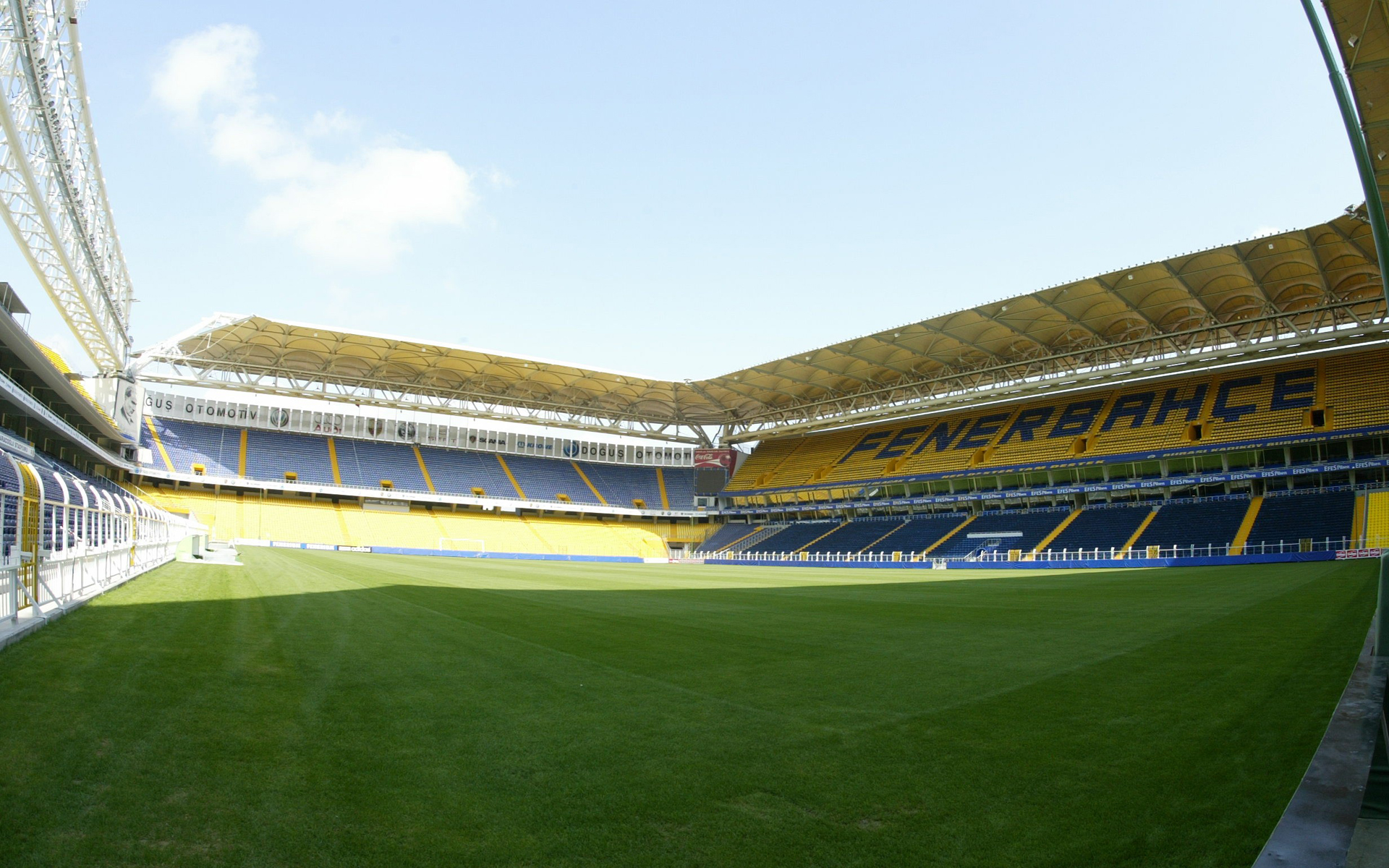 Europa League Group C is very evenly poised with Anderlecht, Saint Etienne and Mainz all at 5 points at the half-way stage. With two away matches coming up at Anderlecht and Saint Etienne, Mainz may struggle leaving the door open to their two opponents. With two home matches against Mainz and Saint Etienne, Anderlecht is worth backing to top the group at 6/4 courtesy of UK bookie bet365 and you can also get 11/8 for them to defeat Mainz on match day four.

Group E has been very competitive with just 3 points separating first and fourth. Having held Roma at the Olimpic Stadium and with two home matches to come starting with Roma, Austria Wien are well placed at the top of the group with 5 points to progress. Austria Wien is listed at 4/1 to defeat Roma in their next match and 11/4 to win the group with sportsbook bet365.

Another intriguing group is Group K. As things stand, Inter Milan sits at the bottom with 3 points from their three games. Sparta Prague is on top with 6 points but Southampton look dangerous in second place with 4 points. Southampton deserved more from their last game at San Siro and has what it takes to defeat Inter Milan at home. With Hapoel Be’er Sheva still to come to St. Mary’s, Southampton, at 13/8, must be considered favourites to win their group.

Sassuolo makes for an interesting bet in Group F as they currently sit second with 4 points. With Rapid Wien and current group leaders, Genk, still to visit to Mapei Stadium, the Italians, playing in their first ever European competition are very good at home and have the potential to go far. Sassuolo comes in at 2/1 to win the group with bet365.

Fiorentina is undefeated in Group J but PAOK of Greece is an interesting prospect. The Greeks are very strong at home in the Europa League and their record suggests they will take maximum points against Qarabag and Slovan Liberec. The crunch will come in the away tie at Fiorentina but there is still all to play for in the group and at odds of 8/1 with bet365, PAOK is worth backing to finish on top.

With three group matches remaining, there is much to play for in many of them and only seven teams from the 48 in the group stages are realistically out of contention, which makes for a very exciting second half of group matches. 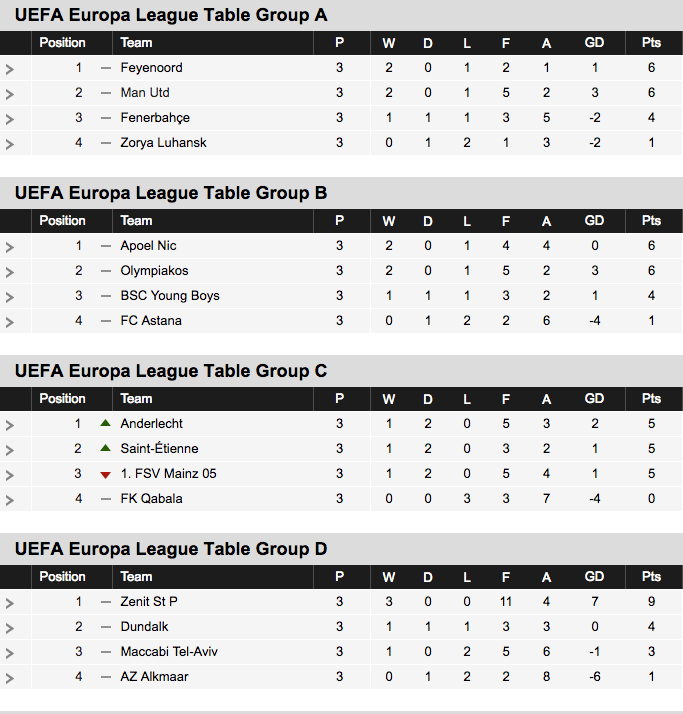 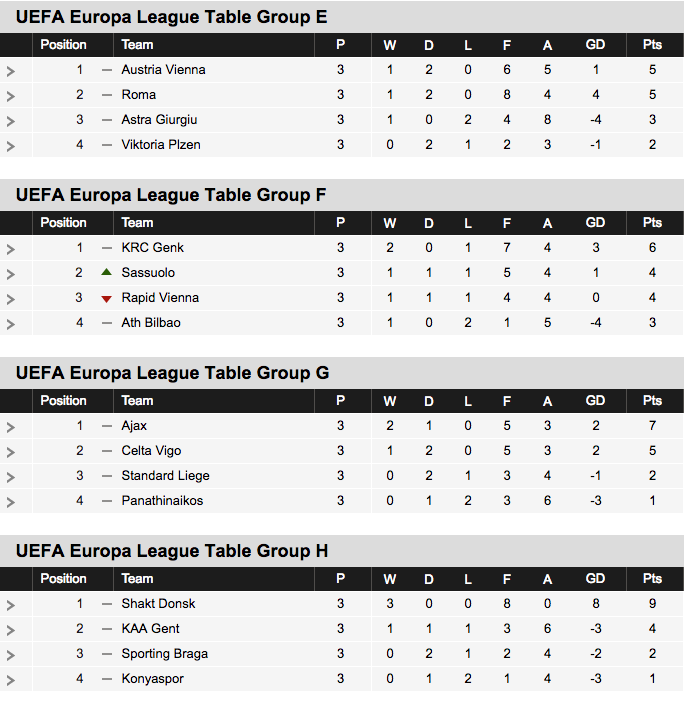 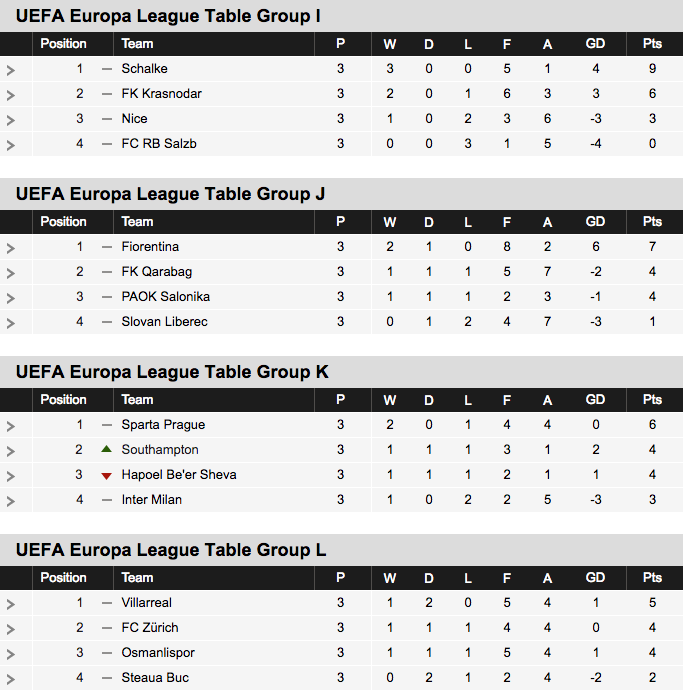 Looking further ahead in the 2016/17 Europa League, Manchester United is the strong favourite with bet365 at 5/1 to lift the trophy once all is said and done but their form heading into the second half of group play is poor and they face two difficult away trips in the process. 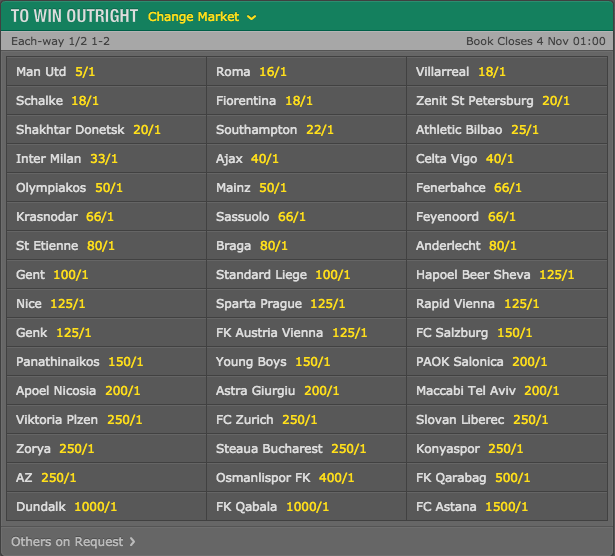 There is also the factor of the teams dropping in from the Champions League to consider and at this stage, we do not know who they will be. Five of the last thirteen Europa League winners have started in the Champions League so in fact, the winner is more likely to be involved from the start of the group stages. Eight of those last thirteen winners have come from Spain, so this is probably the best place to look for a winner. Villarreal is in a good position at the halfway stage of the groups and reached the semi-final of the competition last season. In addition, their general form has been excellent this season and they have lost only one match in both La Liga and the Europa League combined. At 18/1 with bet365, Villarreal makes a very tempting bet to win the 2016/17 Europa League and keep the trophy in Spain.

The best of the best in African soccer fight for bragging rights on the pitch in Gabon. UK bookie William Hill reveals the favorites!
【Marathonbet】Will There Be a Round 3 Between the Cavs & Warriors in 2016-17? The NBA Season Odds Are Unveiled!
【Coral】Who’ll Romp to Glory at Santa Anita? The Breeders’ Cup Odds are Unveiled!
Home
Soccer