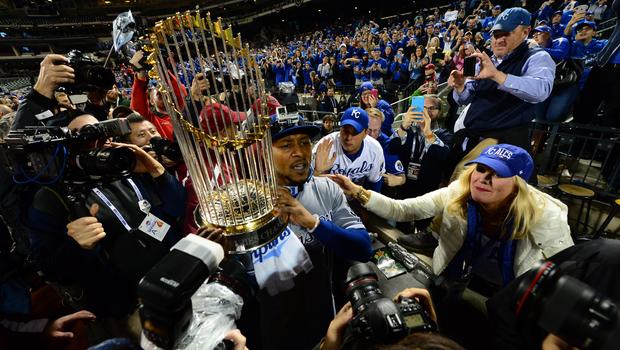 Buyer beware. Have gamblers handicapping baseball’s off-season learned anything from 2015? Going into last season the team with the biggest open wallet was the Boston Red Sox and they were sent out as +600 co-favorites to win the American League championship. Not only did the bevy of high-priced free agents not bring the Bosox a pennant but they fielded one of the worst teams in baseball, winning only 78 games.

Going into 2016 it is the Chicago Cubs – the team without a title since 1908 – that made the biggest noise in the off-season. The hype has been so frenetic around the Chicago moves that bookmaker BetOnline has made the Cubs a +300 favorite to win the National League pennant – odds that short are seldom seen heading into the postseason playoffs, let alone the regular season. The Cubs are -220 to win the National League Central – and that is a division that includes the St. Louis Cardinals and Pittsburgh Pirates who won the most games in baseball in 2015 with 100 and 98 wins, respectively. 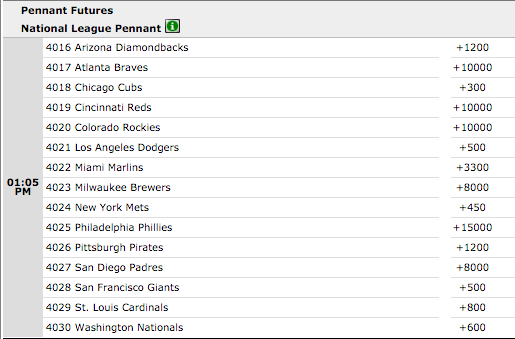 The optimism in Chicago is not that the front office went out and bought a new team with ballyhooed free agents like outfielder Jason Heyward and pitcher Jon Lackey but that these acquisitions will only serve to supplement the home-grown core of Kris Bryant, Anthony Rizzo, Addison Russell and Kyle Schwarber. All of these players have emerged as stars and are still in their early twenties. Prognosticators are only expecting them to get better. 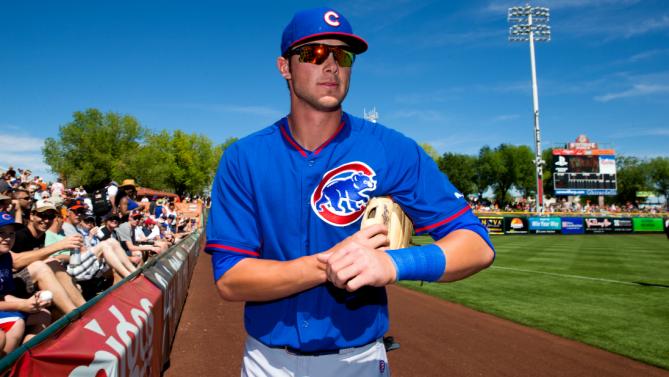 That squadron of young Chicago talent is predicted to overwhelm the likes of the Pirates who have overachieved with their own young talent to reach the post-season three straight years. But each of those seasons the Buccos were sent home in the playoffs after the one-game first-round elimination. Pittsburgh still has one of the league’s best players in Andrew McCutchen but the Pirates are again rated as relative longshots to win the pennant at +1200. 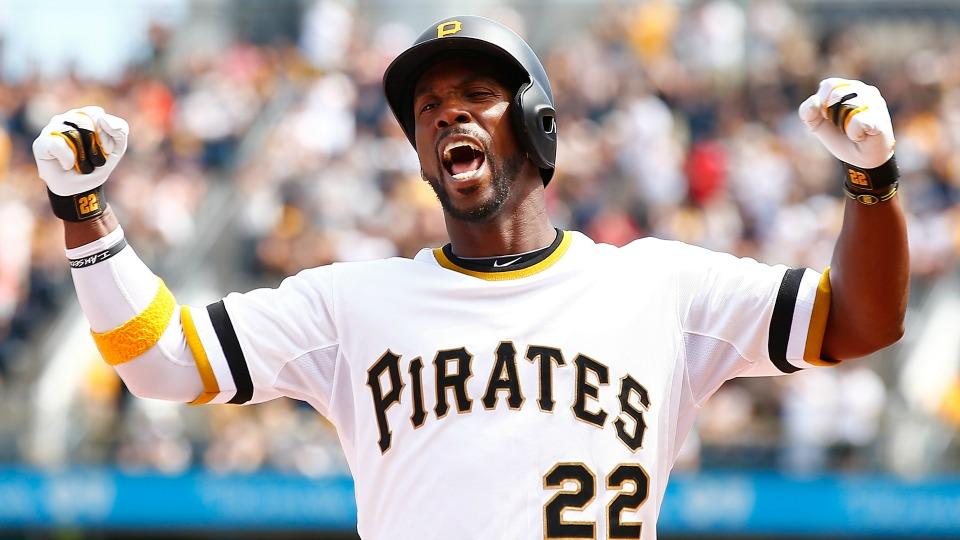 The league’s best player is in Washington where reigning MVP Bryce Harper will be bidding to become the youngest Triple Crown winner in over 100 years. BetOnline has made Harper the favorite to win another Most Valuable Player award in 2016 at +200. The Nationals were as big a disappointment as the Red Sox in 2015, costing manager Matt Williams his job. Expecting a new attitude in the nation’s capital, oddsmakers are giving Washington a nearly even chance of capturing the National League East at +115. 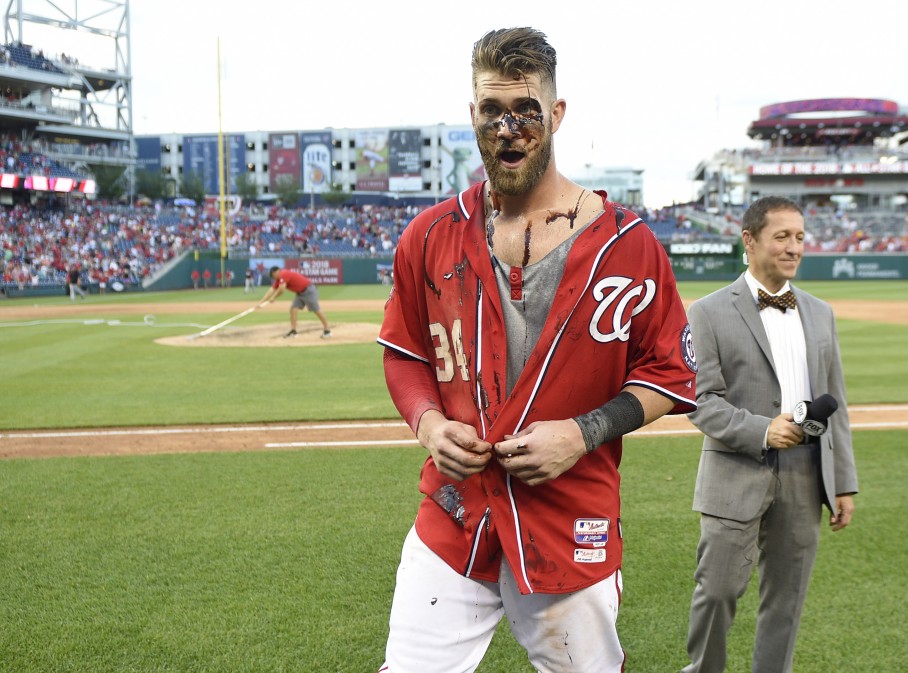 The favorites in the division are the New York Mets, surprise entrants in the 2015 World Series. The Mets still have the best young arms in the game and if their starting pitchers avoid injuries, New York’s -120 odds will be a bargain for supporters come October. If those prized hurlers miss any appreciable time do not expect a deficient New York offense to ride to the rescue, however. 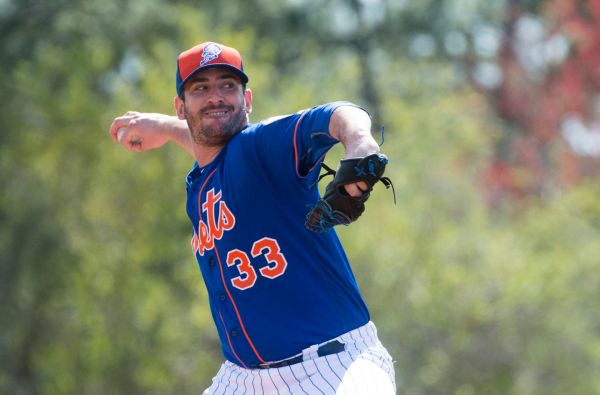 Out west the Los Angeles Dodgers and San Francisco Giants have been splitting the spoils for so long that it is second nature to put money one or the other to win the division. The Giants (+115) added a couple of stud starting pitchers to its rotation in Johnny Cueto and Jeff Samardzija in the off-season while the Dodgers (-105) lost ace Zack Greinke. 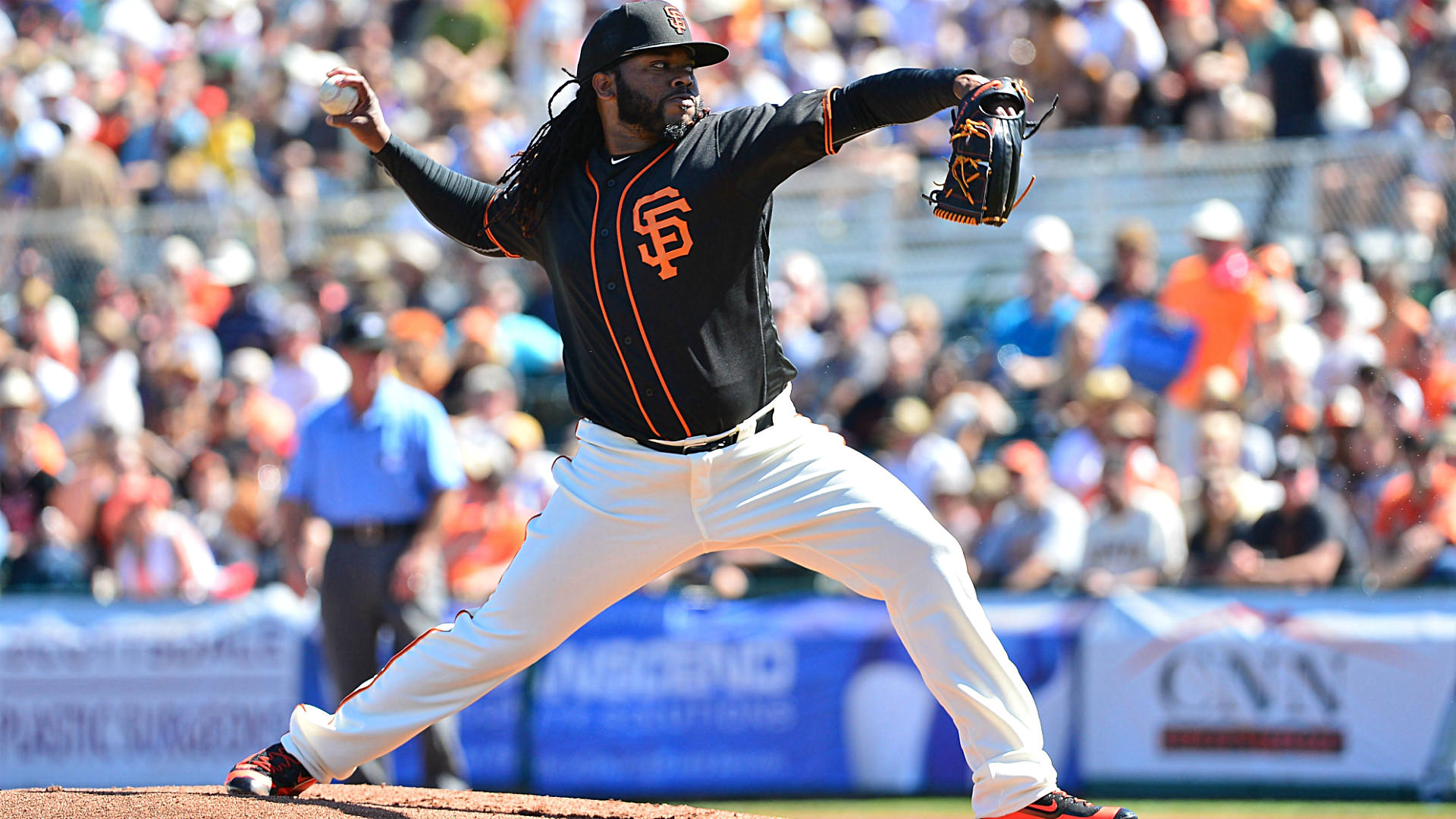 But while the San Diego Padres (+3300) and Colorado Rockies (+6600) remain non-factors out west, the Arizona Diamondbacks have been winning support among bettors this spring training. They will be pulling for two-time MVP runner-up Paul Goldschmidt (+500 to win the MVP) to win the award this year and Greinke to dominate in his new surroundings. 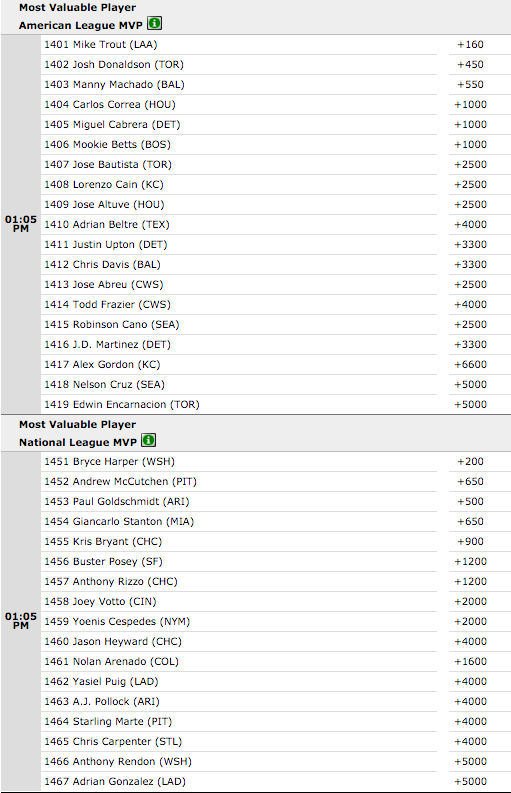 If you have not checked in on the American League for awhile you may need a moment to orient yourself. First off, the Kansas City Royals are world champions. They have been to the Fall Classic two years in a row. They have done it with old-fashioned concepts like team play and defense and bookie BetOnline is expecting more of the same this season and has installed the Royals as a +175 favorite in the American League Central. 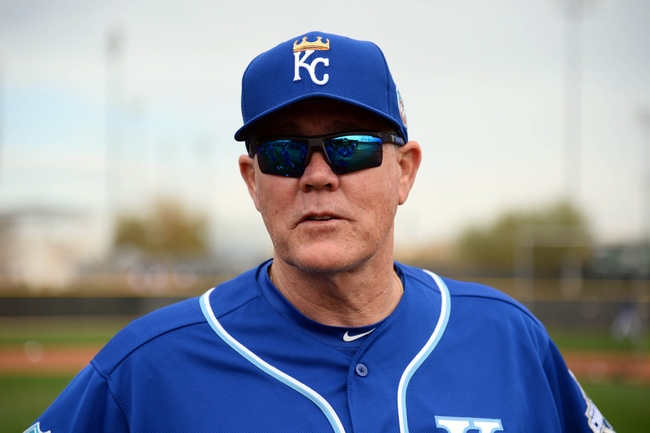 The Royals are expected to be battling another unfamiliar name – the Cleveland Indians at +185. Carlos Carrasco will be leading a pitching staff that backers hope will realize the promise of the past few years that did not materialize. 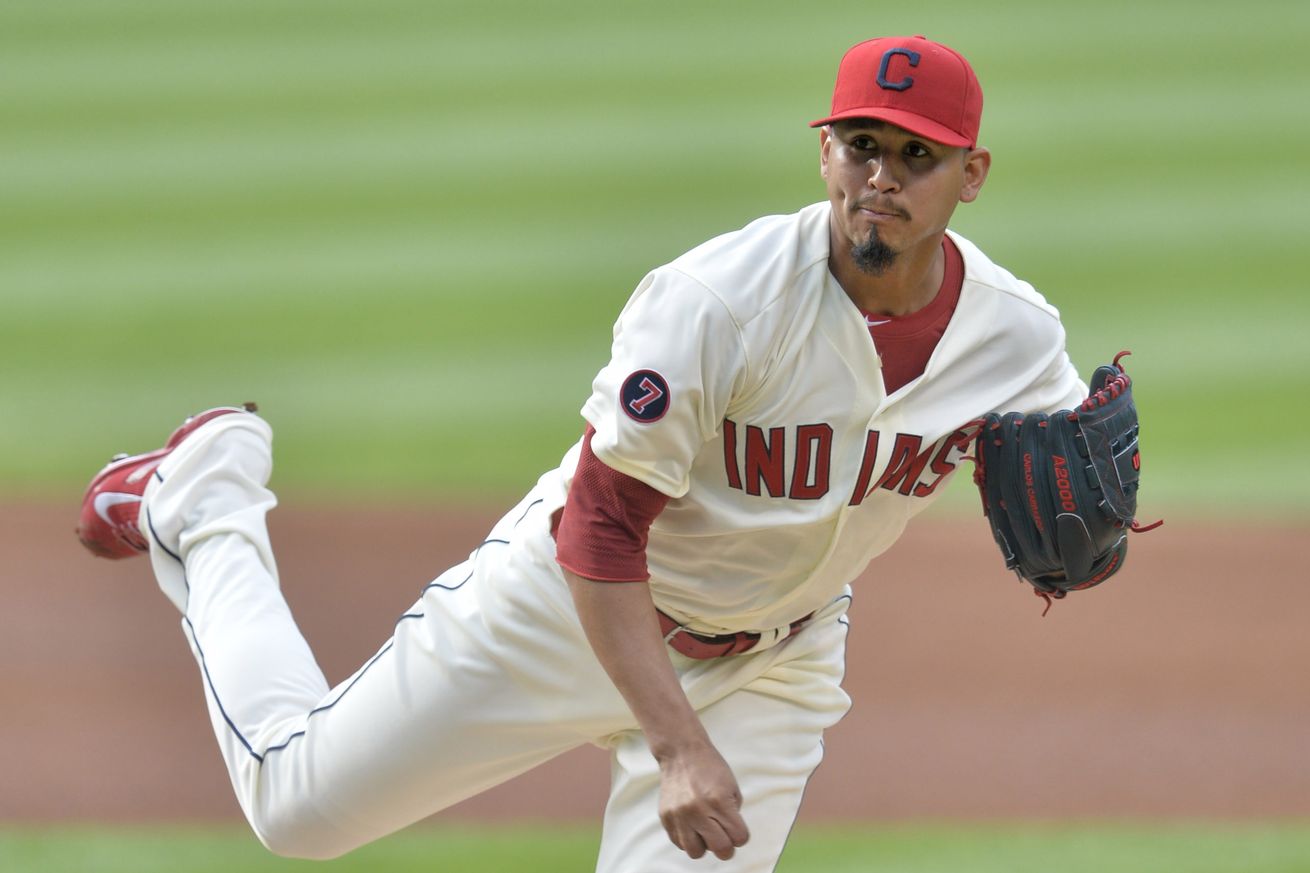 The biggest unfamiliar name among the American League favorites is the Houston Astros as an even-money favorite to win the American League West. Houston broke down its entire team several seasons back and lost an historic amount of games waiting for its young talent to arrive. The wait is over. Carlos Correa, the number one pick in the 2012 draft, made one of the flashiest mid-season debuts in many a season in 2015 and he will be in the starting line-up from Opening Day in 2016. The Astros made the playoffs last year – Correa became the second-youngest player to have a multi-homer game in the postseason – and many punters are expecting the real coming out party for Houston this year. 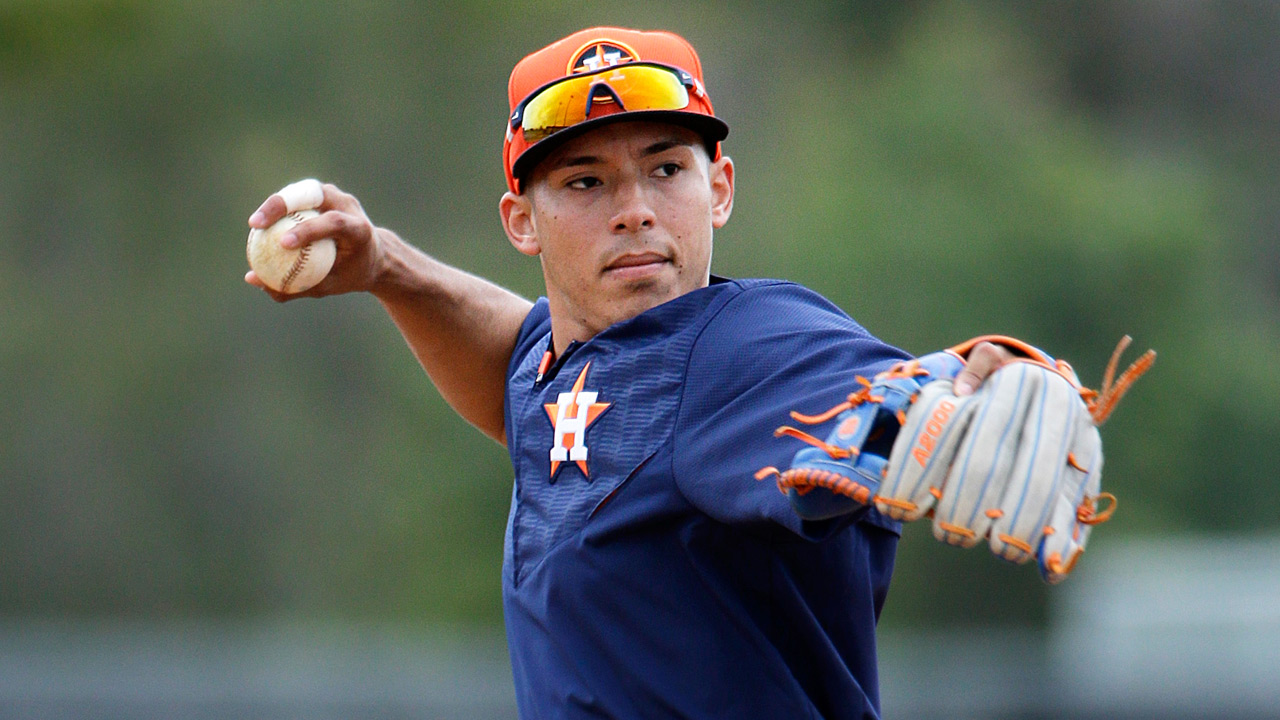 Whereas the National League has evolved into a collection of really good teams and truly bad teams (see Phillies, Philadelphia +15000), no team in the American League does not rate consideration. Even the Oakland Athletics at +1200 are dismissed only at the punter’s peril. And how about the Boston Red Sox, which caused the most betting slips to be torn up in 2015? The 2016 edition is again among the favorites in the American League East at +185. But the optimism this year is not surrounding big name free agents. Instead, it is players the Bosox developed on their own like Mookie Betts that fuel the optimism. Boston backers hope this is the real winning formula. 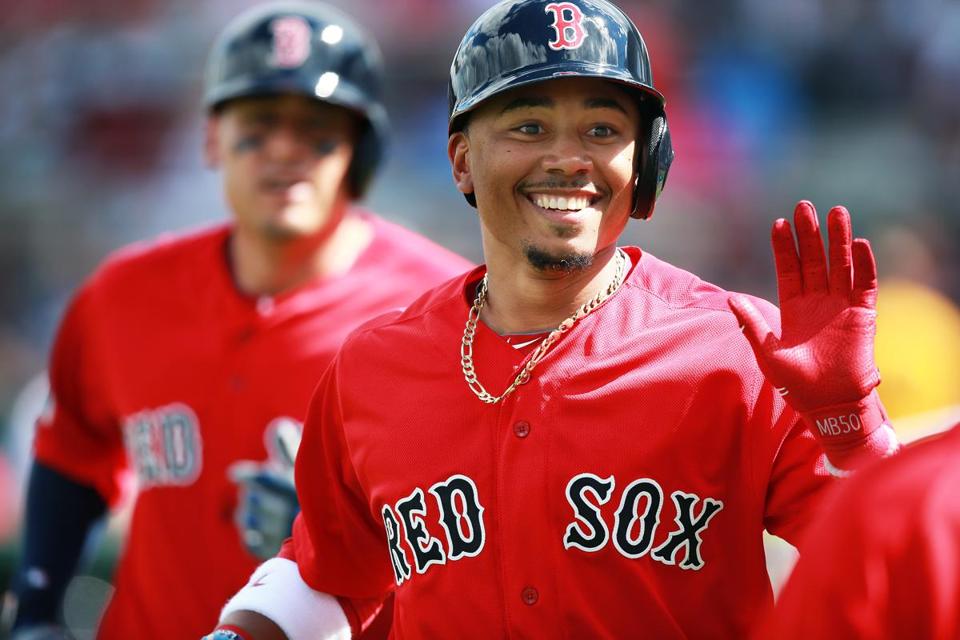 Can Washington Defy the Odds and Capture the World Series?

The Nationals have finally reached the World Series. Can they take home the most prestigious trophy in baseball? Online bookmaker BetOnline has the latest odds for postseason baseball.

Tied at two-games apiece, the Bears and Dinos search for a series lead. Bookmaker 10Bet has the latest odds for the KBO.
【Bookmaker】2016 Dubai World Cup Night: Who Will Capture the World’s Richest Race?
【Bovada】Desert Storm vs. Pac Man: Who’ll Be Victorious in Battle #3?
Home
Baseball