The first Masters event on the road to the US Open – National Bank Open – is all set to take place from the 8th to 14th of August. The 132nd edition of the men’s tournament is going to take place in Montreal, Canada, at the IGA Stadium where we can expect all of our favorite players to return to the hard court.

With that said though, Rafael Nadal withdrew from the tournament due to an abdominal injury and Novak Djokovic had to pull out of the tournament as well as he is still unvaccinated and therefore not allowed to enter Canada. It has also been announced that Roger Federer will not be returning to the court this month, so regretfully we won’t be seeing the big three at the National Bank Open this year.

Additionally, Nikoloz Basilashvili, Alexander Zverev, and John Isner have also pulled out of the tournament due to injuries so the youngsters will be taking the stage front and center for this week in Montreal. 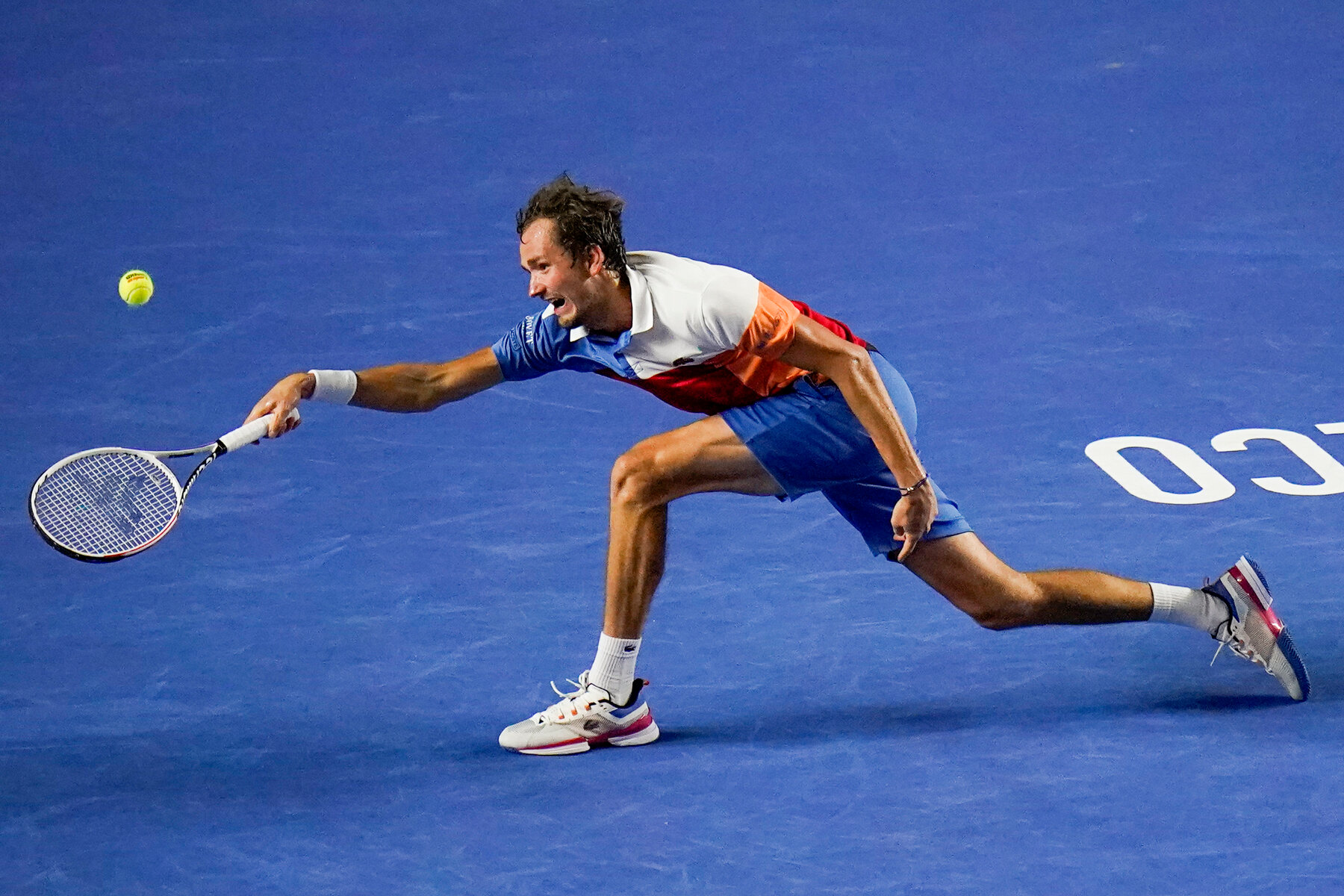 With the top eight seeds have been given a first-round bye, they will be starting their campaign in the second round. The reigning champion Daniil Medvedev is the top-seeded player and with the big three out of the picture, he will be looking to add another trophy to his cabinet. Carlos Alcaraz comes in as the second seed after an amazing clay court season.  We are all looking forward to his performance on the hard court. The third seed Stefanos Tsitsipas is in the same bracket as Alcaraz and the fourth seed Casper Ruud is in Medvedev’s half. 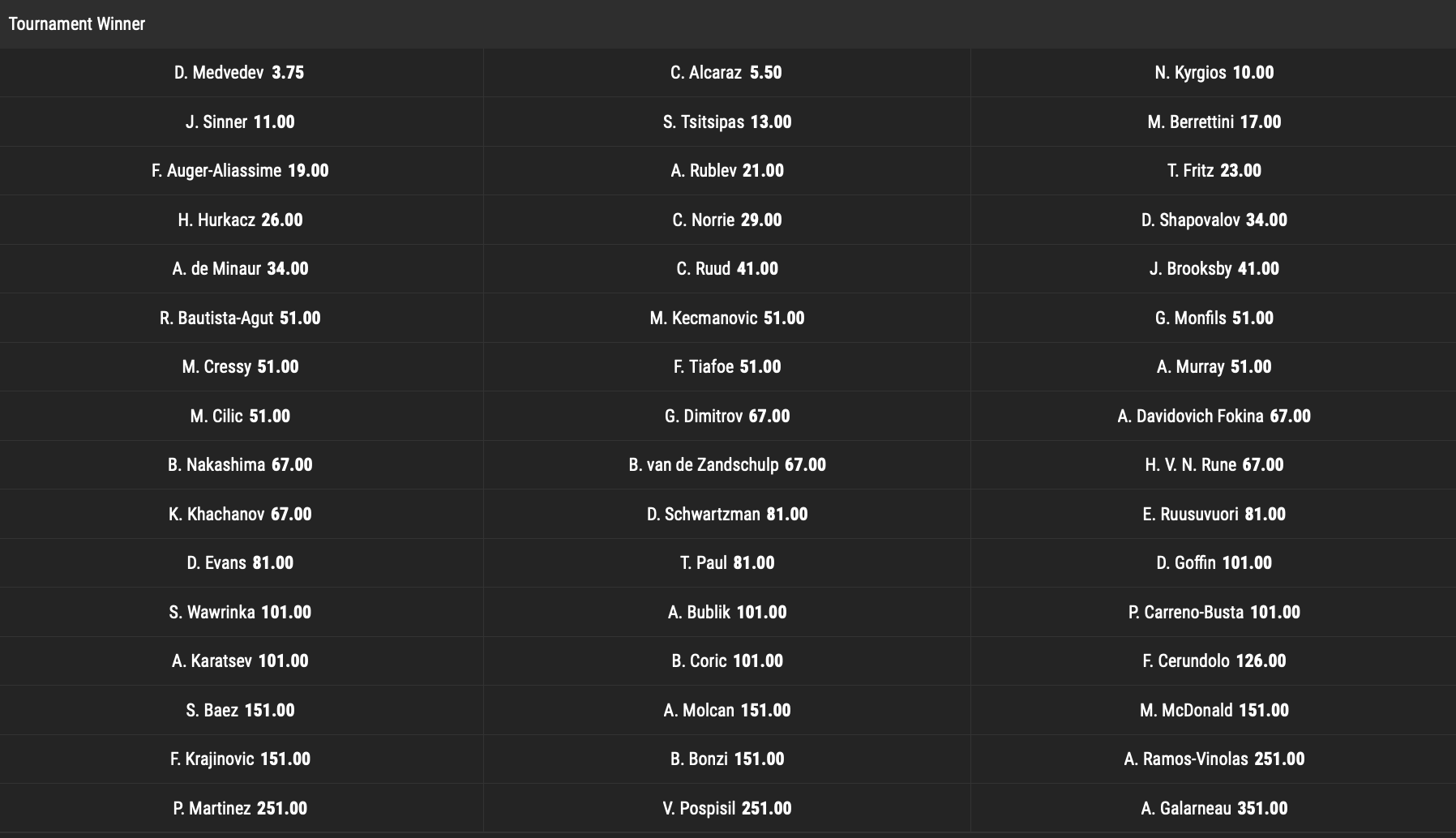 The defending champion Daniil Medvedev is the heavy favorite to win this year’s National Bank Open. Online bookmaker Bwin has priced Medvedev at 3.75. Carlos Alcaraz is next up on the list and closely follows Medvedev at 5.50. Although Kyrgios is priced at 10.00, we can expect him to give Medvedev and Alcaraz a run for their money if the fatigue doesn’t get the best of him after his performance at the recently held Citi Open.

Jannik Sinner and Tsitsipas closely follow Kyrgios and are priced at 11.00 and 13.00 respectively. As both of them have been dealing with a few inconsistencies in their game, they will need to step up their form and close their gaps if they want to win their maiden Canadian Open title.

Looking at the first-round, we have some interesting matches lined up. In the top half, we have Schwartzman vs. Davidovich-Fokina, Shapovalov vs. de Minaur, and Bublik vs. Brooksby. With Schwartzman’s form being a bit inconsistent of late, we have yet to see him back in his full form. The Canadian Open might be the perfect opportunity to see him rebound in preparation for the US Open later this month.

Alex de Minaur just might have the final laugh against Denis Shapavalov if he is able to carry over his Citi Open performance. Although both of them were knocked out in the Round of 32, de Minaur gave a tough battle to finalist Nishioka while the sixth seed Shapavalov lost his match to the unseeded J.J. Wolf.

Moving on to the bottom half, we have an amazing opener between Andy Murray and Taylor Fritz. Taylor Fritz’s performance at the Citi Open was not great, but given his form lately, we expect him not to go down without a fight.

Andy Murray has been struggling with his form in recent years, but he will be looking for a win to prepare himself mentally for the upcoming grand slam. Between the two, we have to say that Fritz has the upper edge.

We also have Cilic vs. Coric as well as Cerdunolo vs. Khachanov in the first-round. This tournament brings Marin Cilic back in action after a long absence while Borna Coric will be returning to the hard court after his performance at the German Open where he reached the quarter-finals. Between the two players, Coric has the upper edge as of now. 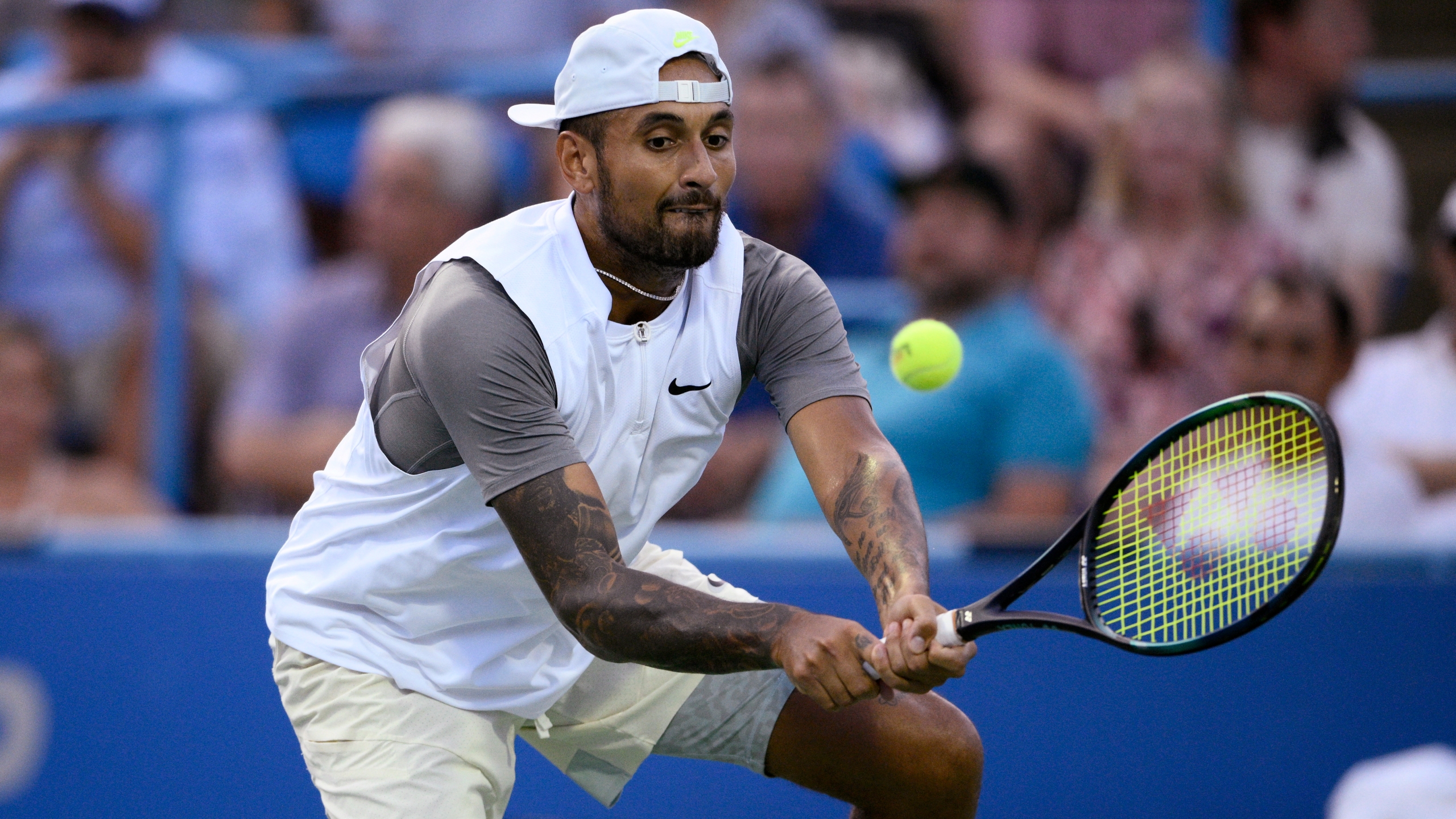 The thrill just increases with the second round as the top half of the draw is stacked with interesting matches, especially for Medvedev and Hurkacz who will most likely face Kyrgios and Wawrinka in the second round.

Kyrgios might be the underdog of the tournament. The Australian has been showing some mind-blowing performances since Wimbledon, and he was even able to take the titles in both the singles and doubles events at the Citi Open. It looks like Kyrgios has finally found his form and passion for the game after a long time and doesn’t intend to let it go anytime soon. We sure hope that he doesn’t give in to the fatigue after his spectacular performance in Washington.

The sixth seed Felix Auger Aliassime will most likely face Nishioka in the second round. Nishioka has shown us the ability to win at the Citi Open making it to the final. Although we have to give the edge to Auger Aliassime, it definitely won’t be an easy match for the Canadian and he will have to reduce his unforced errors and maintain his form and focus to defeat Nishioka.

In the bottom half, we might see a showdown between the Big Foe, Frances Tiafoe and Taylor Fritz. Another match-up to look forward to would be Dan Evans vs. Andrey Rublev. Evans is scheduled to face Filip Krajinovic in the first round, but it shouldn’t be a tough match for Evans as he has been showing improvements in his game lately and has reduced unforced errors during the past few months.

Whatever the scenario is, with so many interesting clashes, the audience is the winner. We might see a final between Medvedev or Kyrgios vs. Alcaraz, and we cannot be more excited about it.

All of the players will be looking to grab the title and boost their mental strength with the US Open right around the corner. Medvedev, having already won the Los Cabos Open, has an upper edge against the players in his half, and he will be looking to defend his title. All in all, we reckon that Medvedev will add the 15th trophy to his cabinet, but not without a tough fight from Kyrgios and Alcaraz.

The main-draw matches are all set to take place from Monday the 8th and the final is scheduled for Sunday the 14th. The winner will take home 1000 points and a check for $915,295. 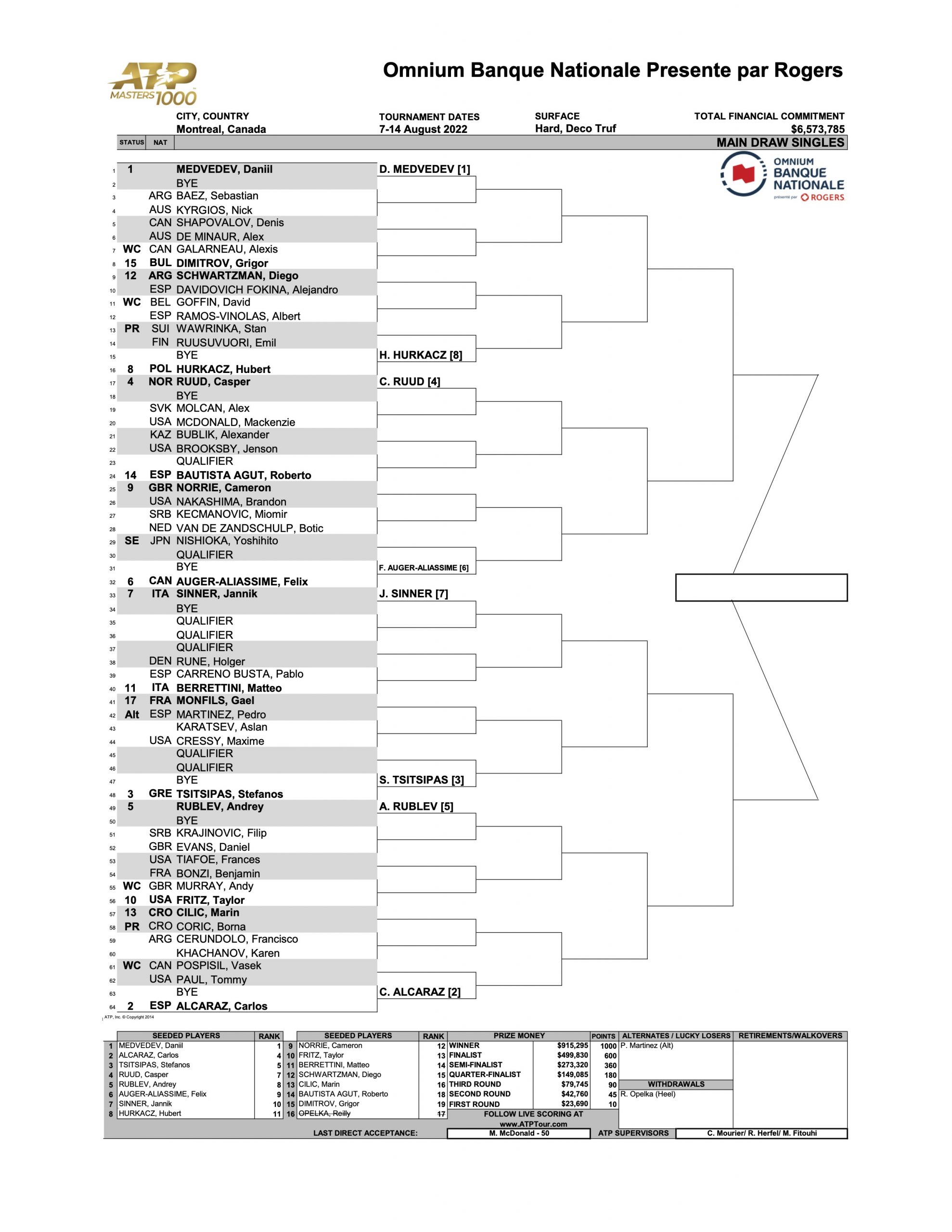 You can also watch the live coverage of every match on Tennis TV.