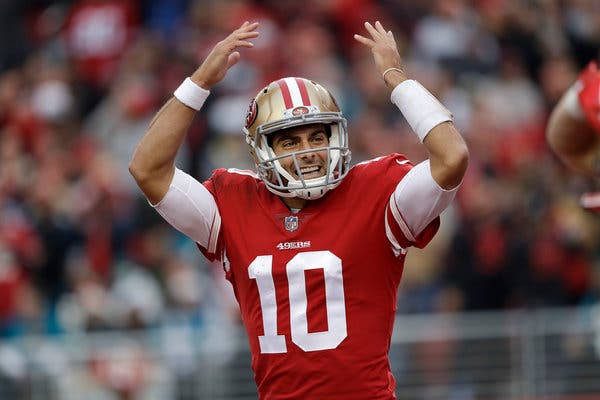 The San Francisco 49ers are putting their undefeated record on the line Thursday night when they battle the Arizona Cardinals. Entering this game on a short week, it will be interesting to see how the 49ers react to playing on such short rest.

After three straight wins, the Cardinals saw their winning streak come to an end thanks to the New Orleans Saints. In the loss, it was the first time this season the Cardinals did not hit double-digits in points. Can the Cardinals rebound on Thursday Night Football?

Online bookmaker SportsBetting has the 49ers at -450 to win on the Money Line.

While the Cardinals’ offense has been solid, their defense has not been. Through the first 8 games of the season, the Cardinals are ranked 29th in points against per game. They are allowing 27.9 points per game. That won’t bode well against the 49ers’ offense.

San Francisco has had no trouble finding the end zone this season and it was proven last week. In their thumping of the Carolina Panthers, the 49ers managed to score 51 points en route to victory. It was the most points scored this season by San Fran.

Rookie Kyler Murray has been decent in his first season of pro football. Overall, Murray has managed 7 touchdown passes and 4 interceptions. He has shown improvement since the first week of the season. Kenyan Drake was also moved to the Cardinals, so it will be interesting to see if he suits up on Thursday, especially considering the injury to David Johnson.

The 49ers look to pick up their 8th straight win while the Cardinals aim to get back to a .500 record.

Can the Chiefs Cover Against Houston?

The Texans already beat the Chiefs earlier this season. Will we see history repeat itself this afternoon? Bookmaker 10Bet has the latest odds for the NFL Playoffs.

NFC rivals Washington and Dallas duke it out with the Country watching. Which team will spoil Thanksgiving for their opponent? Bookmaker 10Bet has the latest odds for the NFL.

Coming in as heavy underdogs, can ND stun Alabama in the CFP? Bookmaker 10Bet has the latest odds for college football.

The NFL is dealing with tons of injuries. How will that affect the most important game in professional football? Bookmaker William Hill has the latest odds for the NFL.
Cain Velasquez and Brock Lesnar Headline WWE’s Crown Jewel
Calgary Enters Nashville Hoping to End Preds’ Winning Streak
Home
American Football